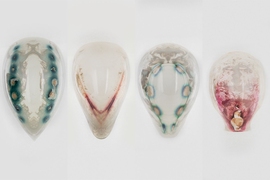 Caption:
A series of masks 3D printed by the Media Lab's Mediated Matter group contained chemical signals embedded in the material. A layer containing living engineered bacteria was coated onto the masks, and the bacteria produced colors only in those areas that had been treated with the chemical signals.
Credits:
courtesy of the Media Lab's Mediated Matter Group

A method for printing 3D objects that can control living organisms in predictable ways has been developed by an interdisciplinary team of researchers at MIT and elsewhere. The technique may lead to 3D printing of biomedical tools, such as customized braces, that incorporate living cells to produce therapeutic compunds such as painkillers or topical treatments, the researchers say.

The new development was led by MIT Media Lab Associate Professor Neri Oxman and graduate students Rachel Soo Hoo Smith, Christoph Bader, and Sunanda Sharma, along with six others at MIT and at Harvard University’s Wyss Institute and Dana-Farber Cancer Institute. The system is described in a paper recently published in the journal Advanced Functional Materials.

“We call them hybrid living materials, or HLMs,” Smith says. For their initial proof-of-concept experiments, the team precisely incorporated various chemicals into the 3D printing process. These chemicals act as signals to activate certain responses in biologically engineered microbes, which are spray-coated onto the printed object. Once added, the microbes display specific colors or fluorescence in response to the chemical signals.

In their study, the team describes the appearance of these colored patterns in a variety of printed objects, which they say demonstrates the successful incorporation of the living cells into the surface of the 3D-printed material, and the cells’ activation in response to the selectively placed chemicals. 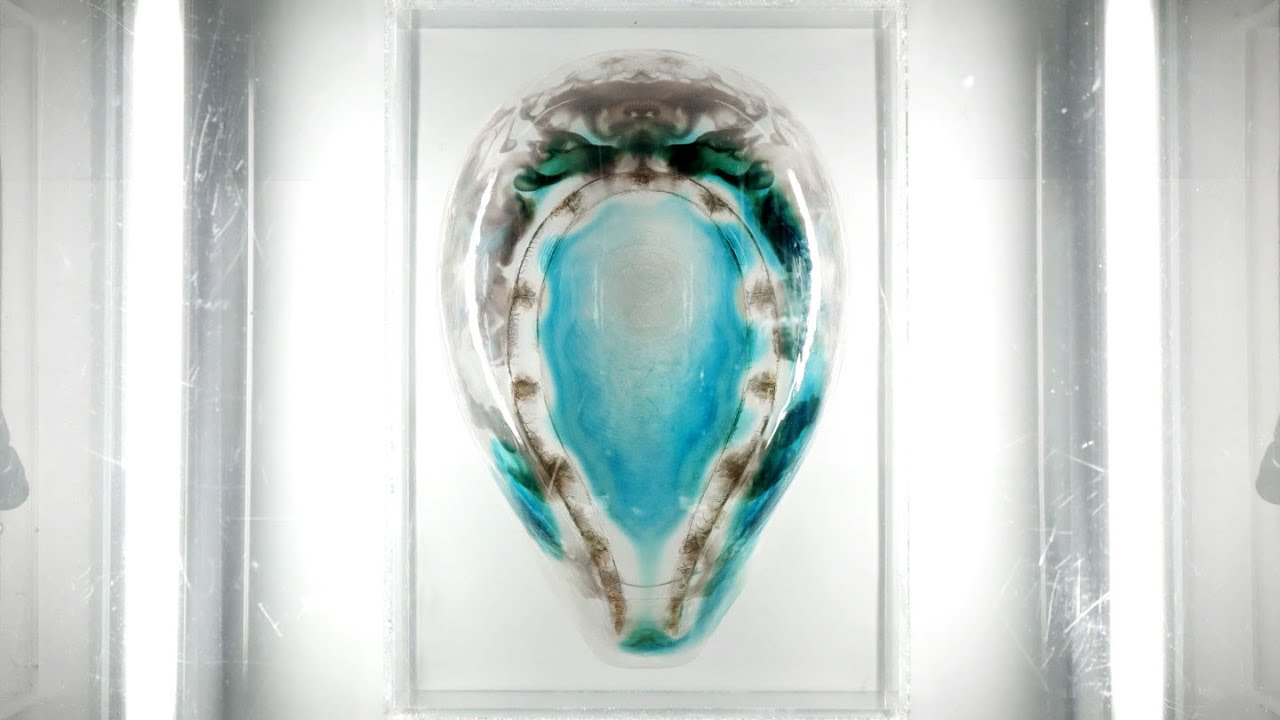 The objective is to make a robust design tool for producing objects and devices incorporating living biological elements, made in a way that is as predictable and scalable as other industrial manufacturing processes.

The team uses a multistep process to produce their hybrid living materials. First, they use a commercially available multimaterial inkjet-based 3D printer, and customized recipes for the combinations of resins and chemical signals used for printing. For example, they found that one type of resin, normally used just to produce a temporary support for overhanging parts of a printed structure and then dissolved away after printing, could produce useful results by being mixed in with the structural resin material. The parts of the structure that incorporate this support material become absorbent and are able to retain the chemical signals that control the behavior of the living organisms.

Finally, the living layer is added: a surface coating of hydrogel — a gelatinous material composed mostly of water but providing a stable and durable lattice structure — is infused with biologically engineered bacteria and spray-coated onto the object.

“We can define very specific shapes and distributions of the hybrid living materials and the biosynthesized products, whether they be colors or therapeutic agents, within the printed shapes,” Smith says. Some of these initial test shapes were made as silver-dollar-sized disks, and others in the form of colorful face masks, with the colors provided by the living bacteria within their structure. The colors take several hours to develop as the bacteria grow, and then remain stable once they are in place.

“There are exciting practical applications with this approach, since designers are now able to control and pattern the growth of living systems through a computational algorithm,” Oxman says. “Combining computational design, additive manufacturing, and synthetic biology, the HLM platform points toward the far-reaching impact these technologies may have across seemingly disparate fields, ‘enlivening’ design and the object space.”

The printing platform the team used allows the material properties of the printed object to be varied precisely and continuously between different parts of the structure, with some sections stiffer and others more flexible, and some more absorbent and others liquid-repellent. Such variations could be useful in the design of biomedical devices that can provide strength and support while also being soft and pliable to provide comfort in places where they are in contact with the body.

The team included specialists in biology, bioengineering, and computer science to come up with a system that yields predictable patterning of the biological behavior across the printed object, despite the effects of factors such as diffusion of chemicals through the material. Through computer modeling of these effects, the researchers produced software that they say offers levels of precision comparable to the computer-assisted design (CAD) systems used for traditional 3D printing systems.

The multiresin 3D printing platform can use anywhere from three to seven different resins with different properties, mixed in any proportions. In combination with synthetic biological engineering, this makes it possible to design objects with biological surfaces that can be programmed to respond in specific ways to particular stimuli such as light or temperature or chemical signals, in ways that are reproducible yet completely customizable, and that can be produced on demand, the researchers say.

“In the future, the pigments included in the masks can be replaced with useful chemical substances for human augmentation such as vitamins, antibodies or antimicrobial drugs,” Oxman says. “Imagine, for example, a wearable interface designed to guide ad-hoc antibiotic formation customized to fit the genetic makeup of its user. Or, consider smart packaging that can detect contamination, or environmentally responsive architectural skins that can respond and adapt — in real-time — to environmental cues.”

In their tests, the team used genetically modified E. coli bacteria, because these grow rapidly and are widely used and studied, but in principle other organisms could be used as well, the researchers say.