Using algorithms to build a map of the placenta

Caption:
An algorithm developed at MIT takes MRI images of placentas (top) and flattens them to be more easily analyzed (middle and bottom).

The placenta is one of the most vital organs when a woman is pregnant. If it’s not working correctly, the consequences can be dire: Children may experience stunted growth and neurological disorders, and their mothers are at increased risk of blood conditions like preeclampsia, which can impair kidney and liver function.

Unfortunately, assessing placental health is difficult because of the limited information that can be gleaned from imaging. Traditional ultrasounds are cheap, portable, and easy to perform, but they can’t always capture enough detail. This has spurred researchers to explore the potential of magnetic resonance imaging (MRI). Even with MRIs, though, the curved surface of the uterus makes images difficult to interpret.

This problem got the attention of a team of researchers from MIT’s Computer Science and Artificial Intelligence Laboratory (CSAIL), who wondered whether the placenta’s scrunched shape could be flattened out using some fancy geometry.

Next month they’re publishing a paper showing that it can. Their new algorithm unfolds images from MRI scans to better visualize the organ. For example, their images more clearly show the “cotyledons,” circular structures that allow for the exchange of nutrients between the mother and her developing child or children. Being able to visualize such structures could allow doctors to diagnose and treat placental issues much earlier in the pregnancy.

“The idea is to unfold the image of the placenta while it’s in the body, so that it looks similar to how doctors are used to seeing it after delivery,” says PhD student Mazdak Abulnaga, lead author of the new paper with MIT professors Justin Solomon and Polina Golland. “While this is just a first step, we think an approach like this has the potential to become a standard imaging method for radiologists.”

Golland says that the algorithm could also be used in clinical research to find specific  biomarkers associated with poor placental health. Such research could help radiologists save time and more accurately locate problem areas without having to examine many different slices of the placenta.

Chris Kroenke, an associate professor at Oregon Health and Science University, says that the project opens up many new possibilities for monitoring placental health.

“The biological processes that underlie cotyledon patterning are not completely understood, nor is it known whether a standard pattern should be expected for a given population,” says Kroenke, who was not involved in the paper. “The tools provided by this work will certainly aid researchers to address these questions in the future.” 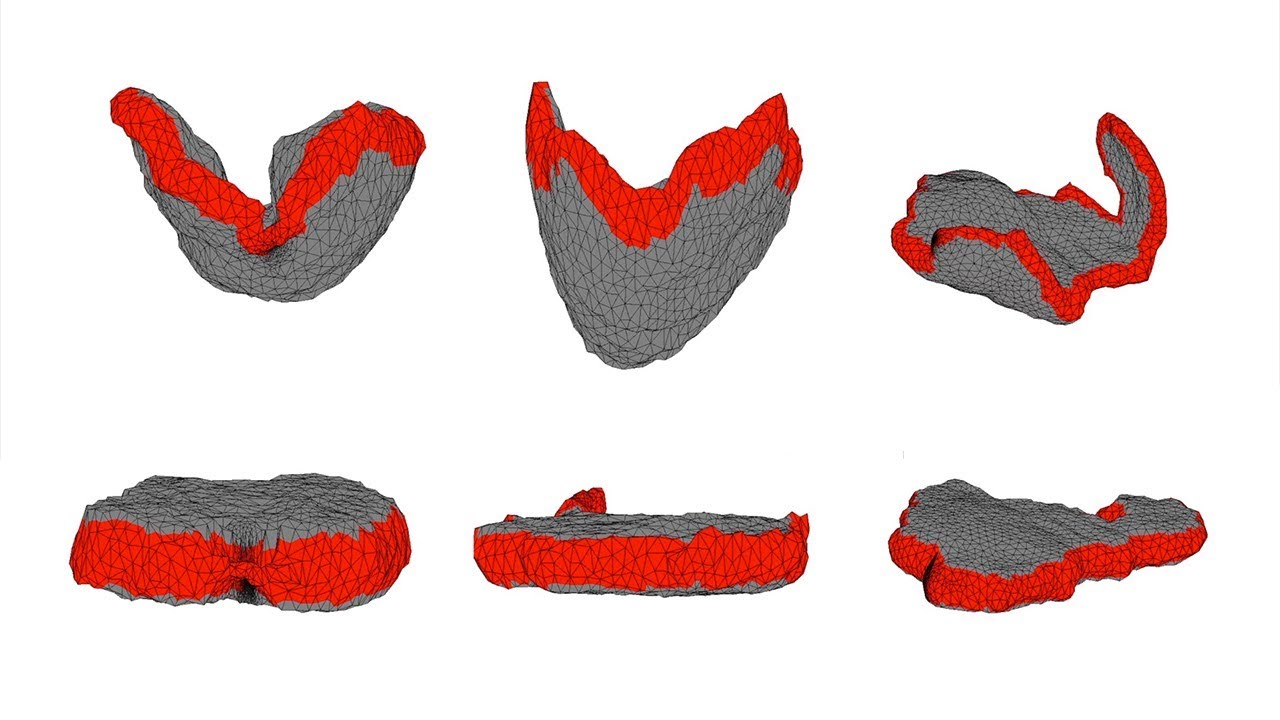 The paper will be presented Oct. 14 in Shenzhen, China, at the International Conference on Medical Image Computing and Computer-Assisted Intervention.

The team’s algorithm first models the placenta’s shape by subdividing it into thousands of tiny pyramids, or tetrahedra. This serves an efficient representation for computers to perform operations to manipulate the shape. The algorithm then arranges those pyramids into a template that resembles the flattened shape that a placenta holds once it’s out of the body. (The algorithm does this by essentially moving the corners of the pyramids on the surface of the placenta to match the two parallel planes of the template and letting the rest fill the new shape.)

The model has to make a tradeoff between the pyramids matching the shape of the template and minimizing the amount of distortion. The team showed the system can ultimately achieve accuracy at the scale of less than one voxel (a 3-D pixel).

The project is far from the first aimed at improving medical imaging by actually manipulating said images. There have been recent efforts to unfold scans of ribs, and researchers have also spent many years developing ways to flatten images of the brain’s cerebral cortex to better visualize areas between the folds.

Meanwhile, work involving the womb is much newer. Previous approaches to this problem focused on flattening different layers of the placenta separately. The team says that they feel that the new volumetric method results in more consistency and less distortion because it maps the whole 3-D placenta at once, enabling it to more closely model the physical unfolding process.

“The team’s work provides a very elegant tool to address the issue of the placenta’s irregular shape being difficult to image,” says Kroenke.

As a next step, the team hopes to work with MGH and BCH to directly compare in-utero images with ones of the same placentas post-birth. Because the placenta loses fluid and changes shape during the birth process, this will require using a special chamber designed by MGH and BCH where researchers can put the placenta directly after the birth.

CSAIL researchers have developed a new algorithm that could help doctors better analyze the placenta and monitor for potential issues during pregnancy, reports Christine Fischer for Engadget. The algorithm “could allow doctors to diagnose and treat placental issues earlier in pregnancy,” Fisher explains.