How to make a book last for millennia 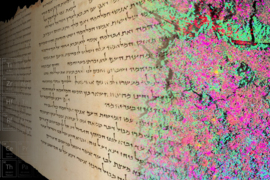 ↓ Download Image
Caption: High-resolution mapping of the distribution of elements in a sample from the 2000-year-old Temple Scroll, as shown by the colors at the right of this image, is providing valuable insight into its ancient fabrication methods and modern conservation strategies.
Credits: Photo-illustration by James Weaver

Caption:
High-resolution mapping of the distribution of elements in a sample from the 2,000-year-old Temple Scroll, as shown by the colors at the right of this image, is providing insight into the scroll's ancient fabrication methods.
Credits:
Photo-illustration by James Weaver

Caption:
A portion of the Temple Scroll, the best preserved of the nearly 900 Dead Sea Scrolls. A small piece of this scroll was analyzed by the researchers to determine the chemistry of its parchment and its surface layer.
Credits:
Image courtesy of The Israel Museum, Jerusalem

First discovered in 1947 by Bedouin shepherds looking for a lost sheep, the ancient Hebrew texts known as the Dead Sea Scrolls are some of the most well-preserved ancient written materials ever found. Now, a study by researchers at MIT and elsewhere elucidates a unique ancient technology for parchment making and provides new insights into possible methods to better preserve these precious historical documents.

The study focused on one scroll in particular, known as the Temple Scroll, among the roughly 900 full or partial scrolls found in the years since that first discovery. The scrolls were found in jars hidden in 11 caves on the steep hillsides just north of the Dead Sea, in the region around the ancient settlement of Qumran, which was destroyed by the Romans about 2,000 years ago.

The Temple Scroll is one of the largest (almost 25 feet long) and best-preserved of all the scrolls, even though its material is the thinnest of all of them (one-tenth of a millimeter, or roughly 1/250 of an inch thick). It also has the clearest, whitest writing surface of all the scrolls. These properties led Admir Masic, the Esther and Harold E. Edgerton Career Development Assistant Professor of Civil and Environmental Engineering and a Department of Materials Science and Engineering faculty fellow in archaeological materials, and his collaborators to wonder how the parchment was made.

The results of that study, carried out with former doctoral student Roman Schuetz (now at Israel’s Weizmann Institute of Science), MIT graduate student Janille Maragh, James Weaver from the Wyss Institute at Harvard University, and Ira Rabin from the Federal Institute of Materials Research and Testing and Hamburg University in Germany, were published today in the journal Science Advances. They found that the parchment was processed in an unusual way, using a mixture of salts found in evaporites — the material left from the evaporation of brines — but one that was different from the typical composition found on other parchments.

“The Temple Scroll is probably the most beautiful and best-preserved scroll,” Masic says. “We had the privilege of studying fragments from the Israeli museum in Jerusalem called the Shrine of the Book,” which was built specifically to house the Dead Sea Scrolls. One relatively large fragment from that scroll was the main subject of the new paper. The fragment, measuring about 2.5 centimeters (1 inch) across was investigated using a variety of specialized tools developed by researchers to map, in high resolution, the detailed chemical composition of relatively large objects under a microscope.

“We were able to perform large-area, submicron-scale, noninvasive characterization of the fragment,” Masic says — an integrated approach that he and Weaver have developed for the characterization of both biological and nonbiological materials. “These methods allow us to maintain the materials of interest under more environmentally friendly conditions, while we collect hundreds of thousands of different elemental and chemical spectra across the surface of the sample, mapping out its compositional variability in extreme detail,” Weaver says.

That fragment, which has escaped any treatment since its discovery that might have altered its properties, “allowed us to look deeply into its original composition, revealing the presence of some elements at completely unexpectedly high concentrations,” Masic says.

The elements they discovered included sulfur, sodium, and calcium in different proportions, spread across the surface of the parchment.

Parchment is made from animal skins that have had all hair and fatty residues removed by soaking them in a lime solution (from the Middle Ages onward) or through enzymatic and other treatments (in antiquity), scraping them clean, and then stretching them tight in a frame to dry. When dried, sometimes the surface was further prepared by rubbing with salts, as was apparently the case with the Temple Scroll.

The team has not yet been able to assess where the unusual combination of salts on the Temple Scroll’s surface came from, Masic says. But it’s clear that this unusual coating, on which the text was written, helped to give this parchment its unusually bright white surface, and perhaps contributed to its state of preservation, he says. And the coating’s elemental composition does not match that of the Dead Sea water itself, so it must have been from an evaporite deposit found somewhere else — whether nearby or far away, the researchers can’t yet say.

The unique composition of that surface layer demonstrates that the production process for that parchment was significantly different from that of other scrolls in the region, Masic says: “This work exemplifies exactly what my lab is trying to do — to use modern analytical tools to uncover secrets of the ancient world.”

Understanding the details of this ancient technology could help provide insights into the culture and society of that time and place, which played a central role in the history of both Judaism and Christianity. Among other things, an understanding of the parchment production and its chemistry could also help to identify forgeries of supposedly ancient writings.

According to Rabin, an expert in Dead Sea Scroll materials, “This study has far-reaching implications beyond the Dead Sea Scrolls. For example, it shows that at the dawn of parchment making in the Middle East, several techniques were in use, which is in stark contrast to the single technique used in the Middle Ages. The study also shows how to identify the initial treatments, thus providing historians and conservators with a new set of analytical tools for classification of the Dead Sea Scrolls and other ancient parchments.”

This information could indeed be crucial in guiding the development of new preservation strategies for these ancient manuscripts. Unfortunately, it appears that much of the damage seen in the scrolls today arose not from their 2,000-plus years in the caves, but from efforts to soften the scrolls in order to unroll and read them immediately after their initial discovery, Masic says.

Adding to these existing concerns, the new data now clearly demonstrate that these unique mineral coatings are also highly hygroscopic — they readily absorb any moisture in the air, and then might quickly begin to degrade the underlying material. These new results thus further emphasize the need to store the parchments in a controlled humidity environment at all times. “There could be an unanticipated sensitivity to even small-scale changes in humidity,” he says. “The point is that we now have evidence for the presence of salts that might accelerate their degradation. … These are aspects of preservation that must be taken into account.”

“For conservation issues and programs, this work is very important,” says Elisabetta Boaretto, director of the Kimmel Center for Archaeological Science at the Weizmann Institute of Science in Israel, who was not associated with this work. She says, “It indicates that you have to know very well the document needing to be preserved, and the preservation has to be tailored to the document’s chemistry and its physical state.”

Boaretto adds that this team’s study of the unusual mineral layer on the parchment “is fundamental for future work in preservation, but most importantly to understand how these documents have been prepared in antiquity. This work certainly sets a standard for other researchers in this field.”

The work was partly supported by DFG, the German Research Foundation.

MIT researchers have conducted a new examination of the Dead Sea Scrolls in an effort to determine how the documents have lasted so long. Prof. Admir Masic “sought to decode just how this unique parchment was made, in hopes that the ancient technology might also reveal new approaches to preserving sensitive historical documents in the modern age,” writes Evan Nicole Brown for Fast Company.

A new MIT study of the Dead Sea scrolls found “salts used on the writing layer of the Temple scroll [that] are not common to the Dead Sea region,” reports Nicola Davis for The Guardian. “These salts are not typical for anything we knew about associated with this period and parchment making,” explains Prof. Admir Masic.