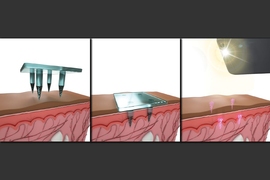 ↓ Download Image
Caption: A key challenge for vaccination campaigns in some developing regions is that there is little infrastructure for storing medical records, so there’s often no easy way to determine who needs a particular vaccine or booster shot. MIT engineers have developed a way to store information about a patient’s vaccine history under the skin, using an invisible quantum dot dye that is delivered, along with a vaccine, by a microneedle patch.
Credits: Image: Second Bay Studios

Caption:
A key challenge for vaccination campaigns in some developing regions is that there is little infrastructure for storing medical records, so there’s often no easy way to determine who needs a particular vaccine or booster shot. MIT engineers have developed a way to store information about a patient’s vaccine history under the skin, using an invisible quantum dot dye that is delivered, along with a vaccine, by a microneedle patch.
Credits:
Image: Second Bay Studios

Editor’s note: This article has been updated to clarify that this research was developed to help avoid preventable deaths in parts of the world where paper or digital systems for storing patients’ vaccination records aren’t available. Many vaccines require multiple doses spaced out at certain intervals; without accurate records, people may not receive all of the necessary doses. The method is still in an experimental stage and is not being used for any current vaccinations, including Covid-19 vaccines.