“If we are very lucky, we might observe something new … or maybe even something totally unexpected.”
Jennifer Chu | MIT News Office
Publication Date:
Press Inquiries 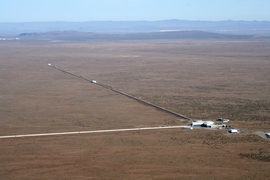 The search for infinitely faint ripples in space-time is back in full swing. Today, LIGO, the Laser Interferometer Gravitational-wave Observatory, operated jointly by Caltech and MIT, resumes its hunt for gravitational waves and the immense cosmic phenomena from which they emanate.

Over the past several months, LIGO’s twin detectors, in Washington and Lousiana, have been offline, undergoing upgrades to their lasers, mirrors, and other components, which will enable the detectors to listen for gravitational waves over a far greater range, out to about 550 million light-years away — around 190 million light-years farther out than before.

As the LIGO detectors turn back on, they will be joined by Virgo, the European-based counterpart based in Italy, which also turns on today after undergoing upgrades that doubled its sensitivity. With both LIGO and Virgo back online, scientists anticipate that detections of gravitational waves from the farthest reaches of the universe may be a regular occurrence.

Q: Give us a sense of the new capabilities that the LIGO detectors now have. What sort of upgrades were made?

A: Both LIGO detectors are coming back online more sensitive than ever before, thanks to a wide range of improvements. In particular, we more than doubled the laser power in the interferometers to reduce one of the LIGO fundamental noise sources — quantum "shot noise,” caused by the uncertainty of the arrival time of photons onto the main photodetector. We also deployed a new technology, "squeezed" light, that uses quantum optics to further reduce shot noise.

Combined with other upgrades to mitigate technical noises (for example noises introduced by the control scheme or from stray light) we improved the sensitivity to binary neutron stars by 40 percent in each detector, with respect to the past observing run.

Q: What do these new capabilities mean for you, as a researcher who will be looking through the data from these upgraded detectors?

A: I am personally very excited to see the LIGO detectors operating with squeezed light! This new technology has been developed here at MIT after many years of research to make it compatible with the very stringent LIGO requirements, and our graduate students have been leading the commissioning of this new system at the observatories. It is particularly rewarding to see that we succeeded in making LIGO better.

Also, operation at high laser power has been enabled by another upgrade developed and built here at MIT — an "acoustic mode damper" glued to the main LIGO optics that mitigates instabilities originating with high laser power. We are looking forward to seeing many years of work in our labs pay off in this observing run!

Q: What new phenomena are you hoping to detect, and how soon could you detect them, with these new capabilities?

A: We hope to detect more binary neutron star systems (so far only one has been detected), and thanks to the improved LIGO sensitivity, we should be able to observe them with high signal-to-noise ratio. And more black holes, obviously! The more sources we detect, the more we can learn about the way these systems form and evolve.

If we are very lucky, we might observe something new, like a neutron star-black hole system, or maybe even something totally unexpected. Not only are the LIGO detectors better than before — the Virgo detector in Italy more than doubled its sensitivity with respect to the last observing run, and this will improve our ability to localize sources in the sky, facilitating the follow-up of telescopes at multiple wavelengths. So, if the last observing run, “O2,” will be remembered as the one that started multimessenger astronomy, I hope the upcoming one, “O3,” will be the one in which multimessenger astronomy becomes the new normal!