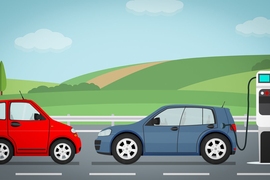 ↓ Download Image
Caption: A new study finds that depending on the location, in some cases an equivalent or even bigger reduction in emissions could be achieved by switching to lightweight conventional (gas-powered) vehicles instead of electric power vehicles.
Credits: Image: MIT News 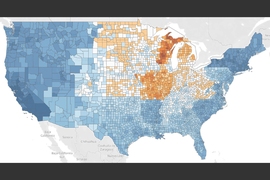 ↓ Download Image
Caption: Map shows counties where battery electric cars provide greater emissions benefits in blue, and those where lightweight gasoline-powered vehicles would have a greater benefit in red. 62 percent of counties show a greater benefit for the EVs, 21 percent have an advantage for the lightweight vehicles, and 17 percent are a tossup.
Credits: Image courtesy of the authors

Caption:
A new study finds that depending on the location, in some cases an equivalent or even bigger reduction in emissions could be achieved by switching to lightweight conventional (gas-powered) vehicles instead of electric power vehicles.
Credits:
Image: MIT News

Caption:
Map shows counties where battery electric cars provide greater emissions benefits in blue, and those where lightweight gasoline-powered vehicles would have a greater benefit in red. 62 percent of counties show a greater benefit for the EVs, 21 percent have an advantage for the lightweight vehicles, and 17 percent are a tossup.
Credits:
Image courtesy of the authors

Policies to encourage reductions in greenhouse gas emissions tend to stress the need to switch as many vehicles as possible to electric power. But a new study by MIT and the Ford Motor Company finds that depending on the location, in some cases an equivalent or even bigger reduction in emissions could be achieved by switching to lightweight conventional (gas-powered) vehicles instead — at least in the near term.

The study looked at a variety of factors that can affect the relative performance of these vehicles, including the role of low temperatures in reducing battery performance, regional differences in average number of miles driven annually, and the different mix of generating sources in different parts of the U.S. The results are being published today in the journal Environmental Science & Technology, in a paper by MIT Principal Research Scientist Randolph Kirchain, recent graduate Di Wu PhD ’18, graduate student Fengdi Guo, and three researchers from Ford.

The study combined a variety of datasets to examine the relative impact of different vehicle choices down to a county-by-county level across the nation. It showed that while electric vehicles provide the greatest impact in reducing greenhouse gas emissions for most of the country, especially on both coasts and in the south, significant parts of the Midwest had the opposite result, with lightweight gasoline-powered vehicles achieving a greater reduction.

The biggest factor leading to that conclusion was the mix of generating sources going into the grid in different regions, Kirchain says. That mix is “cleaner” on both the East and West coasts, with higher usage of renewable energy sources and relatively low-emissions natural gas, while in the upper Midwest there is still a much higher proportion of coal-burning power plants. That means that even though electric vehicles produce no greenhouse emissions while they are being driven, the process of recharging the car’s batteries results in significant emissions.

In those locations, buying a lightweight car, defined as one whose structure is built largely from aluminum or specialized lightweight steel, would actually result in fewer emissions than buying a comparable electric car, the study found.

The research was made possible by Ford’s collection of vehicle-performance data from about 30,000 cars, over a total of about 300 million miles of driving. They come from conventional midsize conventional gasoline cars, and the researchers used standard modeling techniques to calculate the performance of equivalent vehicles that were either hybrid-electric, battery-electric, or lightweight versions of conventional cars.

“We tried to add as much spatial resolution as possible, compared to other studies in the literature, to try to get a sense of the combined effects” of the various factors of temperature, the grid, and driving conditions, Kirchain explains. That combination of data showed, among other things, that “some of the areas with more carbon-heavy grids also happen to be colder, and somewhat more rural,” he says. “All three of those things can tilt emissions in a negative way for electric vehicles” in terms of their impact on reducing emissions. The combined effects are strongest in parts of Wisconsin and Michigan, where lightweight cars would have a significant advantage over EVs in reducing emissions, the study showed.

The impact of cold weather on battery performance, he says, “is something that is discussed in the EV literature, but not as much in the popular discussions of the topic.” Conversely, gasoline-powered vehicles suffer an efficiency penalty in urban driving, but they have lower emissions in regions that are more rural and spread out.

The data on car performance the team had to work with thanks to their collaboration with Ford researchers “was unique,” Kirchain says. “In the past, a ‘large’ study of this type would be a few dozen vehicles,” and those would mainly come from people who volunteered to share their data and therefore were more likely to be concerned about environmental impact. The extensive Ford data, by contrast, provide “a broader cross-section of drivers and driving conditions.”

Kirchain stresses that the intent of this study is not in any way to minimize the importance of switching over ground transportation to electric power in order to curb greenhouse emissions. “We’re not trying to undermine the fact that electrification is the long-term solution — and the short-term solution for most of the country,” he says. But over the next few decades, which is considered a critical period in determining the planet’s climate outcomes, it’s important to know what measures will actually be most effective in reducing carbon emissions in order to set policies and incentives that will produce the best outcomes, he says.

The relative advantage of lightweight vehicles compared to electric ones, according to their modeling, “goes down over time, as the grid improves,” he says. “But it doesn’t go away completely until you get to close to 2050 or so.”

Lightweight aluminum is now used in the Ford F-150 pickup truck, and in the all-electric Tesla sedans. Currently, there are no high-volume lightweight gasoline-powered midsize cars on the market in the U.S., but they could be built if incentives similar to those used to encourage the production of electric cars were in place, Kirchain suggests.

“At least for the north central part of the country, policymakers should consider a more nuanced approach,” he adds.

“This is a significant advance,” says Heather MacLean, professor of civil and mineral engineering at the University of Toronto, who was not associated with this work. This study, she says, “illustrates the importance of the regional disaggregation in the analysis, and that if it were absent results would be incorrect. This is an unequivocal call for regional policies that use the latest research to build rational agendas, rather than prescribing overarching global solutions.”

This study “demonstrates the complexity in elucidating the electrification benefits for lightweighted vehicles,” says Gregory Keoleian, director of the Center for Sustainable Systems  at the University of Michigan, who was not connected to this study. He adds that “The contributions of regional effects such as climate, grid carbon intensities and driving characteristics were carefully mapped to inform carbon reduction strategy for the auto sector.”

3 Questions: Randolph Kirchain on the spread of electronic waste

CRTs going down the tubes? Hardly