There’s excitement in the air for Humberto Caldelas 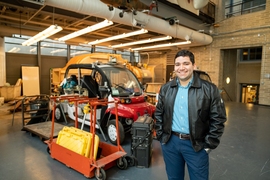 ↓ Download Image
Caption: “I can't even tell you the first time I got interested in airplanes,” says AeroAstro major Humberto Caldelas. “I think I just was born with it.”
Credits: Image: Bryce Vickmark

Caption:
“I can't even tell you the first time I got interested in airplanes,” says AeroAstro major Humberto Caldelas. “I think I just was born with it.”
Credits:
Image: Bryce Vickmark

When Humberto Caldelas II was growing up, his dad took him to all the nearest air shows so he could see all the planes. And when he learned to drive, he joked with his parents that he shouldn’t drive near the airport because he would get distracted. He always looks up at the sky when he hears airplanes pass.

“I can't even tell you the first time I got interested in airplanes,” he says. “I think I just was born with it.”

Caldelas is an MIT senior majoring in aeronautics and astronautics, but he came into the university thinking he’d go into nuclear science and engineering. He used to think of his love of flying as a hobby but not a profession — that is, until his friends convinced him to take a tour of the MIT’s Department of Aeronautics and Astronautics (AeroAstro). During his tour, he learned of a semiserious requirement for every professor candidate. As the rumor goes, after the technical interviews, the candidate is taken outside; if a plane flies overhead and the candidate doesn’t look up, they don’t get the job.

As soon as Caldelas heard this, he knew AeroAstro would be his home.

“I was like, ‘If that's the passion here in the department, then that's where I should be.’ And I haven't regretted that decision since,” he says. “It's really been so much fun. It feels like a home just because I can nerd out with people about all the airplane and space things.”

Through his major, Caldelas has focused on both air and space travel, and hopes his career will go in both directions. Caldelas has been involved with the Reserve Officers’ Training Corps (ROTC) during his four years at MIT and after graduation will join the Navy as a naval aviator. After serving for his country and working with airplanes, he then hopes to become an astronaut.

Caldelas is the kind of person to arrive at the airport well before his flight, just so he can see planes take off. And when he’s on the airplane, he loves sitting in a seat where he can look out the window and watch the engine function.

The aeronautics part of his MIT education gave Caldelas a background on the theory and mechanics of airplane flight. Through his classes, he’s learned about the physics of flying, experimented by making foam airplanes, and tested equipment through wind tunnels.

Over the past two summers, Caldelas interned at Boeing, gaining hands-on experience with the 737 and P-8A Poseidon aircraft. He also got to see how understanding the mechanics of an airplane will help him when he is a pilot.

For example, when they were testing some iterations of the new 777X, one of the test pilots — who had both flying experience and and understood what was going on inside the plane — easily identified an issue with the plane because she was in tune with how an airplane is constructed. Caldelas aspires to do exactly that.

After graduating, he wants to commission as an officer in the Navy and be a fighter pilot. During his first year of high school, Caldelas enrolled in the Civil Air Patrol, which is affiliated with the U.S. Air Force. He flew an airplane for the first time and has never gotten over that thrill. Throughout his time at MIT, he’s been involved with Naval ROTC and often wears the classic “summer whites” uniform with the gold buttons; this semester, he is the company commander of his unit.

After Navy training post-college, he hopes to go to U.S. Naval Test Pilot School. Caldelas says test pilots know how to fly and have a technical understanding of airplanes, which helps them communicate with the engineers on what they need to tweak.

The AeroAstro hallway displays photos of many illustrious alumni of the department, including a number of astronauts — a group Caldelas ultimately hopes to join.

His fascination with astronauts began early: When he was 4 years old, his family went to NASA’s Kennedy Space Center.

“I was just barely walking, and this astronaut comes up, and I was like wow, ‘I want to be him,’” he says.

The admiration with astronauts skyrocketed as he grew up. When MIT was celebrating the 50th anniversary of the Apollo 11 mission, Caldelas received an email from the department asking for students to help escort astronauts around the events. Immediately, he filled out the form — if there is an opportunity to meet an astronaut, Caldelas is there.

Caldelas was assigned to Mark Lee, a former Air Force Colonel and NASA astronaut who flew on four Space Shuttle missions. When Caldelas was showing Lee around, Lee stopped in the middle of the hallway of photographs and nonchalantly said “that’s me,” pointing to a large photograph of a man in a white space suit with Earth in the background. Starstruck, Caldelas looked at the frame and saw the name “Mark Lee” on it. He immediately asked for a photograph of the two of them with the historic image in the background.

“I walk past this photo everyday. Who else can say they met the astronaut in a famous photograph?” Caldelas says. “Only at MIT does that happen.”

Throughout the tour of the department, Caldelas kept saying how he can’t believe he is in the same space as so many MIT legends. A national Hispanic Scholarship Fund recipient, Caldelas is also a first-generation American, one of the first Hispanic students to be accepted into the engineering program at his high school, and the first person to get into MIT from his New Jersey high school.

He’s constantly grateful for his opportunities and hopes to inspire the next generation, just as the MIT astronauts and their photographs inspired him.

“You don’t have to be perfect to go to this school, you just have to have the passion, and that motivates people,” he says. “It’s really humbling for me live out my dreams to come to MIT. And I want to honor this opportunity by inspiring others to keep going and reach for their dreams.”

Taking the next giant leaps

Jumping through life and his passions at MIT