For founders of new college of computing, the human element is paramount 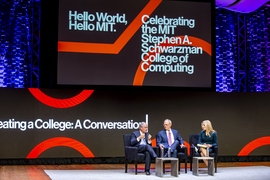 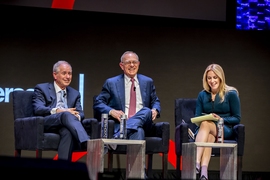 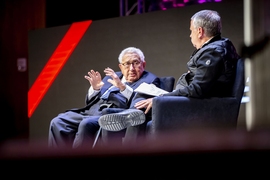 The new MIT Stephen A. Schwarzman College of Computing is destined to become a major center of artificial intelligence research. But a public conversation between the college’s founders on Thursday helped illuminate the very human impulses guiding it.

“It’s a remarkable expression of the human spirit that you have here,” said Stephen A. Schwarzman during a dialogue with MIT President L. Rafael Reif at MIT’s Kresge Auditorium.

Schwarzman is the principal benefactor of the college, which is intended to drive forward research in computing and artificial intelligence, and link computing to every other discipline at the Institute. Its formation represents the biggest change to MIT’s institutional structure since the 1950s. Schwarzman has delivered a $350 million gift to the Institute, as part of the roughly $1 billion college.

To help launch the MIT Schwarzman College of Computing, MIT held a three-day celebration this week, with dozens of speakers appearing from Tuesday to Thursday, among other campus events.

“Anybody from MIT who takes what you do for granted, it’s just that you’ve been here too long,” Schwarzman added. “Every speaker is like magic.”

To an extent, Schwarzman said, the impulse behind the founding of the college came from trips he had taken to China, where he observed intensified Chinese investment in artificial intelligence, and wanted to make sure the U.S. was also on the leading edge of A.I.

“What I was interested in was taking U.S. competitiveness and really punching it up,” said Schwartzman.

And as Schwarzman and Reif recounted, the college’s origins stemmed in part from something eternally human as well: an ongoing series of conversations between them about how to increase the tempo of computing advances. After their initial discussion, Schwarzman said, he encouraged MIT to think bigger about the possible scope of the project.

As Reif noted, he knew that faculty and staff were increasingly emphasizing a need for researchers to be “bilingual,” in terms of knowing their own disciplines, and understanding how computing could help that disciplinary research.

Moreover, Reif added, while China is very strong in certain applied areas of artificial intelligence, he understood that the U.S. has unrivaled strengths in education and research, making the idea of a new computing college at MIT all the more likely to succeed.

Referring to the U.S., Reif said, “We are extremely strong in human capital in this space. Let’s just invest in ourselves and see what happens.”

Kissinger expressed general concern about the potentially unpredictable consequences of artificial intelligence, extending a point he raised in an essay in The Atlantic last summer.

For his part, Friedman, mostly serving as an interlocutor, suggested that these advanced technologies mean humans “have never been more Godlike” than they are now. He added that “at a minimum a simple golden rule” — of equitable ethical treatment among people — “is going to be essential” for society.

At the start of the session, Robert Millard, chair of the MIT Corporation, introduced Reif and Schwarzman while noting the significance of the new college’s launch. Millard called Reif “an inspired leader who has in his tenure become the senior spokesman for higher education, in science and technology generally.”

Schwarzman, Millard observed, has “accelerated MIT further into the future” with his support for the college.

One of the celebration’s closing events was a panel called “Computing for the People: AI and Ethics.” In his discussion with Reif, Schwzarman also offered his thoughts on the ethics and social impact of innovation.

The curriculum of the new college will include ethics, and, as Schwarzman noted, it will always be important to “have a focus on the workforce … [and] the people who get dislocated” by technology.

“The technology is going to affect the whole world, and we have to get it right,” Schwarzman said.

The future of education in a world of pervasive computing

Student challenges kick off celebration of MIT Stephen A. Schwarzman College of Computing