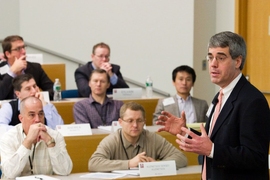 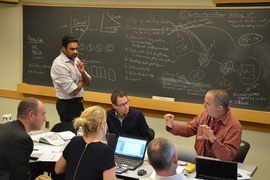 ↓ Download Image
Caption: Attendees of the program work together on a week-long, company-building project. 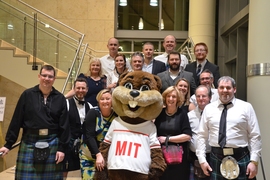 ↓ Download Image
Caption: Attendees pose with Tim the Beaver during one of the networking events of the program.

Caption:
Attendees of the Entrepreneurship Development Program work together on a company-building project in addition to other hands-on learning activities throughout the week.

Caption:
Attendees pose with Tim the Beaver during one of the networking events of the program.

Inside a large classroom of the MIT Sloan School of Management, a group of CEOs, corporate venturing executives, entrepreneurs, and members of regional economic development organizations is passing around brightly colored bibs that double as chew toys for teething babies. They’ve just been told the products are twice as expensive as several knockoffs, and yet the two Scottish moms who run the company have sold more than a million of them in recent years.

“What is this company’s core advantage in the market?” Bill Aulet, the managing director of the Martin Trust Center for MIT Entrepreneurship, asks his befuddled and slightly amused audience.

As the crowd throws out ideas based on their careful analysis of the bib — everything from unique designs of cartoon animals to safety features — Aulet steers them toward the point of the exercise: Always focus on the customer. In this case, the founders have established a following among upper middle-class moms who want their babies not only clean and happy but stylish; brand recognition goes a long way for this particular demographic.

Focusing on the customer is a simple enough concept to understand, but it requires a total and unwavering commitment when starting a company.

The lesson was one of many last week that challenged attendees to think like succesful entrepreneurs during the 20th annual Entrepreneurship Development Program. The program, known as EDP, stands out among Sloan’s executive education offerings for its action-based learning and breakneck pace.

In one whirlwind week, the course teaches attendees about each step of the venture creation process and challenges them to apply those lessons as teams in a company-building project. The experience is as demanding as it is rewarding.

“I feel like I’ve been here for a year already,” exclaimed one of this year’s attendees in the middle of the second day.

Each day includes lectures by senior MIT faculty members and succesful entrepreneurs, deep dives into case studies, and visits to local startups. As the evening approaches, attendees work to achieve project milestones, picking up additional lessons — including the importance of team dynamics and how to work in high-stress environments — along the way.

“It’s one thing to sit there and be told in a classroom, ‘This is how something should work,’ but actually executing is very difficult,” says Riley Rees, who attended EDP in 2017 and is currently an MBA candidate at Sloan. “EDP is action-based learning. The structure is so rigorous; it’s an incredible experience.”

Since it’s inception in 1999, the course has allowed thousands of participants from more than 75 countries to “drink from the MIT firehose,” as Aulet affectionately puts it. The goal is to maximize MIT’s impact by exporting its unique brand of high-tech entrepreneurship to people from around the world.

“Innovation-driven entrepreneurship is what people want more and more, and if you want to get it like a shot in the arm, as quickly as you can, EDP is the best choice,” says Aulet, who serves as the faculty director of EDP.

The demanding schedule makes for a charged classroom that Aulet says mimics the startup experience and maximizes EDP’s benefits.

“People involved with [EDP] have a blast,” Aulet says. “The energy in the room pushes everyone. You have an energized classroom, it energizes the instructors, and it’s a positive feedback loop that takes you to another level. It’s really transformative.”

A history of impact

Aulet credits Ed Roberts, the David Sarnoff Professor of Management and Technology at Sloan, with starting programs on running high-tech businesses at MIT in the 1980s and ’90s. In 1990, Roberts founded the MIT Entrepreneurship Center, later renamed the Martin Trust Center for MIT Entrepreneurship, where MIT has organized many of its entrepreneurial training resources.

Ken Morse served as the founding managing director of the center between 1996 and 2009 at a time when the number of MIT professors teaching entrepreneurship-related courses grew from three to over 36. Aulet says Morse helped take EDP “from academic speed to entrepreneur speed.”

The program’s effect on attendees can be measured in applications that come in the following year. Customers, the entrepreneurial saying goes, vote with their feet. In that sense, EDP has been a huge success, consistently attracting a large amount of interest each year while largely relying on word of mouth for marketing.

“I think EDP markets itself,” Aulet says. “Throughout the world, there are thousands of alumni of EDP, and they’re our best sales people. The best sales person you can have is your customer.”

The program’s impact extends even beyond its thousands of past attendees, as many EDP alumni use the framework they learned to improve the entrepreneurial ecosystems in their own regions.

“There’s been a proliferation of similar programs that in many cases have been inspired by [EDP],” says Peter Hirst, Sloan’s senior associate dean for executive education. “We know this because people have attended EDP and told us they were attending to replicate this type of capability-building at their own institutions.”

From that perspectve, EDP serves as a gateway for complementary initiatives such as the MIT Regional Entrepreneurship Acceleration Program (REAP), a two-year learning engagement between the Institute and regions around the world that began in 2012, and MIT Bootcamps, which bring together groups from around the world for a similar project-based program.

Scotland, for instance, was part of the first cohort of MIT REAP and has been sending entrepreneurs to EDP for years.

John Knapton, who works at the nonprofit accelerator Catalyst in Northern Ireland, brought 10 CEOs from his region to EDP this year to expose them to MIT’s methods in hopes of improving Northern Ireland’s culture of entrepreneurship.

“We’re really keen to encourage academic-industrial entrepreneurship,” Knapton says of his organization. “At MIT, here’s a successful university that does spinoffs really, really well. So how can we duplicate that back home?”

The business world has experienced booms, busts, and major transformations since 1999, and EDP’s curriculum has adjusted accordingly. This year’s program emphasized the importance of collecting data to build and protect unique value propositions.

“Each year, we look at the program and update it for the new needs and opportunities of the market,” Aulet says.

And EDP’s instructors wouldn’t be practicing what they preach if they weren’t constantly seeking feedback from attendees and iterating on the course design.

“We get enough feedback to know if we’re resonating with them, and we learn from them,” Aulet says. “That’s entrepreneurial behavior in action. We have to walk the walk.”

Twenty years is an old age for any program, but the people running EDP show no signs of slowing down.

“The program itself evolves a lot; it’s a living organism,” Hirst says. “On one hand, I feel 20 years is a good lifetime for a program, but I see no reason why there wouldn’t continue to be a need for it for another 20 years and beyond. It’s every bit as vibrant and useful now as it was 20 years ago.”