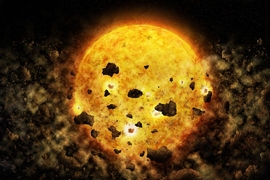 ↓ Download Image
Caption: This artist’s illustration depicts the destruction of a young planet, which scientists may have witnessed for the first time.
Credits: Image: NASA/CXC/M.Weiss

Caption:
This artist’s illustration depicts the destruction of a young planet, which scientists may have witnessed for the first time.
Credits:
Image: NASA/CXC/M.Weiss

For nearly a century, astronomers have puzzled over the curious variability of young stars residing in the Taurus-Auriga constellation some 450 light years from Earth. One star in particular has drawn astronomers’ attention. Every few decades, the star’s light has faded briefly before brightening again.

In recent years, astronomers have observed the star dimming more frequently, and for longer periods, raising the question: What is repeatedly obscuring the star? The answer, astronomers believe, could shed light on some of the chaotic processes that take place early in a star’s development.

Now physicists from MIT and elsewhere have observed the star, named RW Aur A, using NASA’s Chandra X-Ray Observatory. They’ve found evidence for what may have caused its most recent dimming event: a collision of two infant planetary bodies, which produced in its aftermath a dense cloud of gas and dust. As this planetary debris fell into the star, it generated a thick veil, temporarily obscuring the star’s light.

“Computer simulations have long predicted that planets can fall into a young star, but we have never before observed that,” says Hans Moritz Guenther, a research scientist in MIT’s Kavli Institute for Astrophysics and Space Research, who led the study. “If our interpretation of the data is correct, this would be the first time that we directly observe a young star devouring a planet or planets.”

The star’s previous dimming events may have been caused by similar smash-ups, of either two planetary bodies or large remnants of past collisions that met head-on and broke apart again.

“It’s speculation, but if you have one collision of two pieces, it’s likely that afterward they may be on some rogue orbits, which increases the probability that they will hit something else again,” Guenther says.

Guenther is the lead author of a paper detailing the group’s results, which appears today in the Astronomical Journal. His co-authors from MIT include David Huenemoerder and David Principe, along with researchers from the Harvard-Smithsonian Center for Astrophysics and collaborators in Germany and Belgium.

Scientists who study the early development of stars often look to the Taurus-Auriga Dark Clouds, a gathering of molecular clouds in the constellations of Taurus and Auriga, which host stellar nurseries containing thousands of infant stars. Young stars form from the gravitational collapse of gas and dust within these clouds. Very young stars, unlike our comparatively mature sun, are still surrounded by a rotating disk of debris, including gas, dust, and clumps of material ranging in size from small dust grains to pebbles, and possibly to fledgling planets.

“If you look at our solar system, we have planets and not a massive disk around the sun,” Guenther says. “These disks last for maybe 5 million to 10 million years, and in Taurus, there are many stars that have already lost their disk, but a few still have them. If you want to know what happens in the end stages of this disk dispersal, Taurus is one of the places to look.”

Guenther and his colleagues focus on stars that are young enough to still host disks. He was particularly interested in RW Aur A, which is at the older end of the age range for young stars, as it is estimated to be several million years old. RW Aur A is part of a binary system, meaning that it circles another young star, RW Aur B. Both these stars are about the same mass as the sun.

Since 1937, astronomers have recorded noticeable dips in the brightness of RW Aur A every few decades. Each dimming event appeared to last for about a month. In 2011, the star dimmed again, this time for about half a year. The star eventually brightened, only to fade again in mid-2014. In November 2016, the star returned to its full luminosity.

Astronomers have proposed that this dimming is caused by a passing stream of gas at the outer edge of the star’s disk. Still others have theorized that the dimming is due to processes occurring closer to the star’s center.

“We wanted to study the material that covers the star up, which is presumably related to the disk in some way,” Guenther says. “It’s a rare opportunity.”

In January 2017, RW Aur A dimmed again, and the team used NASA’s Chandra X-Ray Observatory to record X-ray emission from the star.

“The X-rays come from the star, and the spectrum of the X-rays changes as the rays move through the gas in the disk,” Guenther says. “We’re looking for certain signatures in the X-rays that the gas leaves in the X-ray spectrum.”

In total, Chandra recorded 50 kiloseconds, or almost 14 hours of X-ray data from the star. After analyzing these data, the researchers came away with several surprising revelations: the star’s disk hosts a large amount of material; the star is much hotter than expected; and the disk contains much more iron than expected — not as much iron as is found in the Earth, but more than, say, a typical moon in our solar system. (Our own moon, however, has far more iron than the scientists estimated in the star’s disk.)

This last point was the most intriguing for the team. Typically, an X-ray spectrum of a star can show various elements, such as oxygen, iron, silicon, and magnesium, and the amount of each element present depends on the temperature within a star’s disk.

“Here, we see a lot more iron, at least a factor of 10 times more than before, which is very unusual, because typically stars that are active and hot have less iron than others, whereas this one has more,” Guenther says. “Where does all this iron come from?”

The researchers speculate that this excess iron may have come from one of two possible sources. The first is a phenomenon known as a dust pressure trap, in which small grains or particles such as iron can become trapped in “dead zones” of a disk. If the disk’s structure changes suddenly, such as when the star’s partner star passes close by, the resulting tidal forces can release the trapped particles, creating an excess of iron that can fall into the star.

The second theory is for Guenther the more compelling one. In this scenario, excess iron is created when two planetesimals, or infant planetary bodies, collide, releasing a thick cloud of particles. If one or both planets are made partly of iron, their smash-up could release a large amount of iron into the star’s disk and temporarily obscure its light as the material falls into the star.

“There are many processes that happen in young stars, but these two scenarios could possibly make something that looks like what we observed,” Guenther says.

He hopes to make more observations of the star in the future, to see whether the amount of iron surrounding the star has changed — a measure that could help researchers determine the size of the iron’s source. For instance, if the same amount of iron appears in, say, a year, that may signal that the iron comes from a relatively massive source, such as a large planetary collision, versus if there is very little iron left in the disk.

“Much effort currently goes into learning about exoplanets and how they form, so it is obviously very important to see how young planets could be destroyed in interactions with their host stars and other young planets, and what factors determine if they survive,” Guenther says.

Writing for Space.com, Chelsea Gohd reports that a team of researchers led by Hans Moritz Guenther at MIT’s Kavli Institute has observed a young star devouring a planet. “The researchers hope to get a better idea of what really goes on in the life of a young star and how infant planets manage to survive,” explains Gohd.

Newsweek reporter Aristos Georgiou writes that physicists from MIT and other institutions have observed a star, called RW Aur A, consuming a young planet. Observations made with NASA’s Chandra X-ray Observatory over a five-year period enabled the finding, explains Georgiou.

Seth Borenstein of the Associated Press reports that astronomers, led by MIT research scientist Hans Mortiz Guenther, believe they may have witnessed a star devouring a young planet. According to computer simulations, the observed “30-fold increase in iron on the edge of the star” and “pronounced dimming” could be the result of planet devouring.