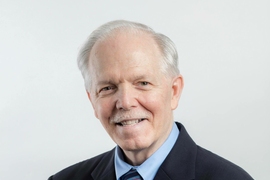 Institute Professor Thomas Magnanti has been honored as one of Singapore’s National Day Award recipients, for his long-term work developing higher education in Singapore.

The government of Singapore announced that Magnanti received the Public Administration Medal (gold) on Aug. 9, the National Day of Singapore, for his role as founding president of the Singapore University of Technology and Design (SUTD). He will receive the medal at a ceremony in Singapore later this year.

“I am quite pleased,” Magnanti says about the award. “It’s quite an honor to receive it.”

SUTD is a recently developed university in Singapore focused on innovation-based technology, and design across several fields. Its curriculum is organized in interdisciplinary clusters to promote research and education across multiple areas of study.

The new honor came as a surprise to Magnanti, who started working to help develop SUTD in 2008 and became its president in October 2009. In January 2010, MIT and SUTD signed a memorandum outlining their partnership for both research and education. After a groundbreaking in 2011, SUTD enrolled its first undergraduate students in 2012 and moved to its permanent campus site in 2015.

MIT and SUTD maintained their education partnership from 2010 to 2017 and continue to work as partners in research through the International Design Center, which has facilities both at MIT and on the SUTD campus.

Magnanti, who is an MIT Institute Professor, is a professor of operations research at the MIT Sloan School of Management, as well as a faculty member in the Department of Electrical Engineering and Computer Science. He is also a former dean of the School of Engineering. Magnanti is an expert on optimization whose work has spanned business and engineering, as well as the theoretical and applied sides of his field.

Magnanti says his time working on joint educational projects involving MIT and Singapore has been “a wonderful experience.”

Singapore, Magnanti adds, has consistently maintained “a deep commitment to education and to research, and has a very strong relationship with MIT, which has sustained itself now for over 20 years.”

Magnanti says he is pleased by the solid footing now established by the projects he has worked on in Singapore.

“There have been many highlights,” Magnanti says, including the development of an innovative university and degree structure, and novel pedagogy and research. He notes that students from SUTD “have done very well in their placements, in Singapore. Remarkably well.”

Overall, Magnanti adds, simply “developing the university has been one of the highlights. Hiring faculty, bringing in outstanding students and staff. … I am, and I think MIT is, very proud of what’s happened with the university.”

Institute Prof. Thomas Magnanti will receive Singapore’s Gold Public Administration Medal for his “visionary leadership” at the Singapore University of Technology and Design (SUTD), reports Jolene Ang for The Straits Times. Magnanti was cited for his work organizing the university in clusters, which “better supported the interdisciplinary nature of SUTD's programmes and strengthened SUTD's research capabilities.”