Measuring the economy with location data 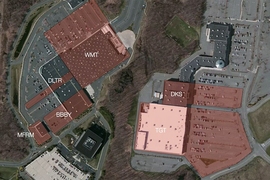 ↓ Download Image
Caption: Thasos Group builds “geofences,” virtual boundaries established around a target location, such as stores, shopping malls, work sites, neighborhoods, and cities. Thasos then collects anonymized and aggregated data via smartphones’ GPS, RFID, or Wi-Fi. Analyzing this data produces clusters of people who may be, for example, first-time or regular customers, seasonal or full-time workers, or travelers from afar or nearby. Comparing location data from the time a specific change is implemented — such as a price drop — with historical data quantifies the change’s impact on specific clusters.
Credits: Courtesy of Thasos Group

Carrying your smartphone around everywhere has become a way of life. In doing so, you produce a surprising amount of data about your role in the economy — where you shop, work, travel, and generally hang out.

Thasos Group, founded at MIT in 2011, has developed a platform that leverages that data, in anonymized and aggregated form, to measure economies for industry and investors.

“We process up to 3 to 5 terabytes of data per day and use that data to measure economic activities, such as how many people visit a store or a commercial property, how many people go to work or travel, and how many man-hours are spent in a factory,” says Pan, Thasos’ chief scientist.

This quantifiable information is valuable for investors, corporations, policymakers, economists, and others who need a deep economic understanding of various sectors in real-time. In November, for instance, Thasos released a study showing how Amazon’s acquisition of Whole Foods, and the subsequent price drop Amazon implemented, affected consumer behavior. Results from user location data indicated price drops drove up foot traffic by 17 percent in the immediate aftermath, with around 15 to 24 percent of shoppers defecting from nearby competing stores.

“Using generic movement patterns, we noted some shoppers started to explore Whole Foods who would never go there before,” Pan says.

With more than 25 hedge fund clients, Thasos is popular among investors, who use the platform to measure various metrics — such as employee hours worked and customer visitation — of companies they may invest in or sell shares. The startup also has corporate clients and hopes, in the future, to reach policymakers. It could produce, for instance, real-time measurements on how fiscal policies affect consumer spending, work hours, and other economic metrics.

The other Thasos co-founders are John Collins MBA ’12 and Greg Skibiski.

To make use of location data, Thasos first builds “geofences,” virtual boundaries established around a target location, such as stores, shopping malls, work sites, neighborhoods, and cities. Tens of thousands of hand-drawn geofences are added to Thasos’ database weekly, each with important metadata, such as when a facility or store opened, whether or not the parking lot is shared, and information on nearby businesses.

Once the geofences are established, Thasos compiles location data from within the geofences from apps and other software that collect data via smartphones’ GPS, RFID, or Wi-Fi, in an anonymous and aggregated fashion. By analyzing these data, the platform identifies clusters of people who may be, for example, first-time or regular customers, seasonal workers or full-time workers, or travelers from afar or nearby. The platform can then compare location data from the time a specific change is implemented — such as a price drop — with historical data to quantify the change’s impact on specific clusters.

Thasos has published a couple of case studies with big-name clients — which have produced some surprising insights.

On Aug. 28, Amazon acquired Whole Foods and implemented price reductions across all stores. Using their geofences for Whole Foods stores across the nation, as well as for Costco, Trader Joe’s, Sprouts, Target, Kroger, Walmart, and several other nearby stores, Thasos looked at location data from tens of millions of shoppers to measure customer growth, defection from competitors, driving times, and demographics such as income level (established through census data).

Results showed overall foot traffic for the Whole Foods stores increased 17 percent during the week of price reduction; it decelerated to 4 percent by the end of three weeks but stayed elevated above pre-acquisition numbers. New customers came primarily from Walmart (24 percent), Kroger (16 percent), and Costco (15 percent). Because all data are anonymous, Thasos determined only types of shoppers that defected — for example, 24 percent of Whole Foods new customers appearing over the three-week period were regulars at Walmart.

Interestingly, Pan says, it was the competing stores’ wealthiest customers who tended to defect to Whole Foods, an outcome that was contradictory to Amazon’s aim of attracting a broader customer base. “We showed that the strategy of cutting costs didn’t attract lower- and middle-income shoppers,” Pan says, adding, “For corporations, that type of insight is key in shaping decisions.”

In another recent case study, Thasos looked at real estate investment trusts (REITs), companies that own and operate commercial properties, such as malls. To measure their properties’ value, REITs generally manually count foot traffic at a sample of malls and estimate performance across all properties nationwide. Based on such estimates, owners had seemed to suggest that nationwide foot traffic was increasing to their malls and several high-end anchor stores, such as Macy’s or Nordstrom, as well as at lower-end anchor stores, such as JCPenney and Sears.

Thasos, however, determined otherwise. Their data indicated declining quarterly foot traffic trends — suggesting a drop in overall sales — throughout 2017 by about 5 to 6 percent at all anchor stores. (Results were later verified by transaction and sales records from the stores when the owners reported earnings.) Surprisingly, high-end anchor department stores underperformed compared to lower-end department stores by about 3 percent. And malls with grocery stores attracted about 5 percent more people than those without.

Such insights can help REITs find ways to attract more visitors, such as investing in more low-end department stores or grocery stores, Pan says: “Having this information changes the way you think about the value of the property.”

In 2009, Pan joined the Media Lab to study under Pentland, the Toshiba Professor of Media Arts and Sciences and a pioneer in behavioral data science. There, he became interested in marrying his background in data science with his interest in economics.

The idea was to use data to measure components of world economies, but he didn’t know which type of data to use. Today, surveys are typically used for such social science and marketing research — a type of probability sampling that originated in the 1930s. “Industry is still using technology that was developed in the Great Depression,” Pan says.

As it happened, smartphones were on the rise. “Everyone had a smartphone — and the phone always knows where you are,” Pan says. “From an economic standpoint, you’re basically consuming, resting, or working. I realized location data was the best angle to measure those metrics.”

Pan also sought guidance from Andrew Lo, the Charles E. and Susan T. Harris Professor and the director of the Laboratory for Financial Engineering at the MIT Sloan School of Management, who is known for using computer science to study financial markets. “Media Lab is so interdisciplinary, you’re expected to think across different departments,” Pan says. “You can always take classes that help you understand a field you’re not formally trained in to do something that’s cutting edge.”

Moving between the Media Lab and MIT Sloan, Pan built an early version of the Thasos platform. In 2011, he and Pentland, already a serial entrepreneur, along with Collins and Skibiski, launched Thasos out of MIT, quickly landing a $10 billion-plus hedge fund client in New York City, where the startup is now headquartered.

Today, Thasos operates primarily in the United States. But the startup aims to expand worldwide, Pan says, with ambitions of becoming a “global economic-insights engine.” The idea is to create a system that can compare and contrast major economic components — such as consumer spending, factory production, employment hours, and tourism — between countries.

“Every country today has its own way of measuring economic activities. We’re trying to build a consistent system to compare countries, to provide a better view of the overall world economy,” he says.

Inventing the “Google” for predictive analytics