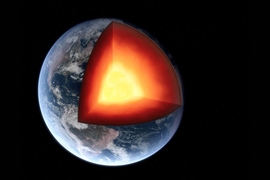 ↓ Download Image
Caption: There may be more than a quadrillion tons of diamond hidden in the Earth’s interior, according to a new study from MIT and other universities.
Credits: Image: stock image

Caption:
There may be more than a quadrillion tons of diamond hidden in the Earth’s interior, according to a new study from MIT and other universities.
Credits:
Image: stock image

There may be more than a quadrillion tons of diamond hidden in the Earth’s interior, according to a new study from MIT and other universities. But the new results are unlikely to set off a diamond rush. The scientists estimate the precious minerals are buried more than 100 miles below the surface, far deeper than any drilling expedition has ever reached.

The ultradeep cache may be scattered within cratonic roots — the oldest and most immovable sections of rock that lie beneath the center of most continental tectonic plates. Shaped like inverted mountains, cratons can stretch as deep as 200 miles through the Earth’s crust and into its mantle; geologists refer to their deepest sections as “roots.”

In the new study, scientists estimate that cratonic roots may contain 1 to 2 percent diamond. Considering the total volume of cratonic roots in the Earth, the team figures that about a quadrillion (1016) tons of diamond are scattered within these ancient rocks, 90 to 150 miles below the surface.

“This shows that diamond is not perhaps this exotic mineral, but on the [geological] scale of things, it’s relatively common,” says Ulrich Faul, a research scientist in MIT’s Department of Earth, Atmospheric, and Planetary Sciences. “We can’t get at them, but still, there is much more diamond there than we have ever thought before.”

Faul and his colleagues came to their conclusion after puzzling over an anomaly in seismic data. For the past few decades, agencies such as the United States Geological Survey have kept global records of seismic activity — essentially, sound waves traveling through the Earth that are triggered by earthquakes, tsunamis, explosions, and other ground-shaking sources. Seismic receivers around the world pick up sound waves from such sources, at various speeds and intensities, which seismologists can use to determine where, for example, an earthquake originated.

Scientists can also use this seismic data to construct an image of what the Earth’s interior might look like. Sound waves move at various speeds through the Earth, depending on the temperature, density, and composition of the rocks through which they travel. Scientists have used this relationship between seismic velocity and rock composition to estimate the types of rocks that make up the Earth’s crust and parts of the upper mantle, also known as the lithosphere.

However, in using seismic data to map the Earth’s interior, scientists have been unable to explain a curious anomaly: Sound waves tend to speed up significantly when passing through the roots of ancient cratons. Cratons are known to be colder and less dense than the surrounding mantle, which would in turn yield slightly faster sound waves, but not quite as fast as what has been measured.

“The velocities that are measured are faster than what we think we can reproduce with reasonable assumptions about what is there,” Faul says. “Then we have to say, ‘There is a problem.’ That’s how this project started.”

Diamonds in the deep

The team aimed to identify the composition of cratonic roots that might explain the spikes in seismic speeds. To do this, seismologists on the team first used seismic data from the USGS and other sources to generate a three-dimensional model of the velocities of seismic waves traveling through the Earth’s major cratons.

Next, Faul and others, who in the past have measured sound speeds through many different types of minerals in the laboratory, used this knowledge to assemble virtual rocks, made from various combinations of minerals. Then the team calculated how fast sound waves would travel through each virtual rock, and found only one type of rock that produced the same velocities as what the seismologists measured: one that contains 1 to 2 percent diamond, in addition to peridotite (the predominant rock type of the Earth’s upper mantle) and minor amounts of eclogite (representing subducted oceanic crust). This scenario represents at least 1,000 times more diamond than people had previously expected.

“Diamond in many ways is special,” Faul says. “One of its special properties is, the sound velocity in diamond is more than twice as fast as in the dominant mineral in upper mantle rocks, olivine.”

The researchers found that a rock composition of 1 to 2 percent diamond would be just enough to produce the higher sound velocities that the seismologists measured. This small fraction of diamond would also not change the overall density of a craton, which is naturally less dense than the surrounding mantle.

“They are like pieces of wood, floating on water,” Faul says. “Cratons are a tiny bit less dense than their surroundings, so they don’t get subducted back into the Earth but stay floating on the surface. This is how they preserve the oldest rocks. So we found that you just need 1 to 2 percent diamond for cratons to be stable and not sink.”

In a way, Faul says cratonic roots made partly of diamond makes sense. Diamonds are forged in the high-pressure, high-temperature environment of the deep Earth and only make it close to the surface through volcanic eruptions that occur every few tens of millions of years. These eruptions carve out geologic “pipes” made of a type of rock called kimberlite (named after the town of Kimberley, South Africa, where the first diamonds in this type of rock were found). Diamond, along with magma from deep in the Earth, can spew out through kimberlite pipes, onto the surface of the Earth.

For the most part, kimberlite pipes have been found at the edges of cratonic roots, such as in certain parts of Canada, Siberia, Australia, and South Africa. It would make sense, then, that cratonic roots should contain some diamond in their makeup.

“It’s circumstantial evidence, but we’ve pieced it all together,” Faul says. “We went through all the different possibilities, from every angle, and this is the only one that’s left as a reasonable explanation.”

A new study by MIT researchers uncovers evidence that more than a quadrillion tons of diamonds are located in the Earth’s upper mantle, reports Katie Camero for The Boston Globe. Camero explains that, “researchers came to this conclusion after they found in global records over the past few decades a ‘glitch’ in seismic wave activity.”

A team including MIT research scientist Ulrich Faul has discovered that the Earth’s interior contains 1,000 times more diamonds than was previously thought, writes Sarah Emerson for Motherboard. The researchers believe that one to two percent of “craton roots,” which are the deepest sections of the “rock layers extending upwards of 200 miles through the Earth’s crust and mantle,” may contain diamonds.

Using “recorded sound waves from seismic activity like earthquakes and tsunamis,” MIT researchers have found that there may be a quadrillion tons of diamonds under the Earth’s surface, reports Sarah Gray for Fortune. The seismic data provided this information, “because the speed of sound waves changes depending on the temperature, density and composition of the earth they travel through,” explains Gray.

MIT researchers have discovered a cache of diamonds below the surface of the Earth, deeper than any drilling expedition has ventured, reports the Agence France-Presse wire. This discovery was made after “scientists were puzzled by observations that sound waves would speed up significantly when passing through the roots of ancient cratons.”

MIT research scientist Ulrich Faul used seismic data to determine that there may be diamonds underneath the Earth’s surface. “Located over 100 miles below Earth's tectonic plates are ancient, hard rocks called ‘cratonic roots’ that potentially consist of one to two percent diamond — totaling a quadrillion tons,” writes Lilly Price for USA Today.

A study led by MIT research scientist Ulrich Faul finds that diamonds are about 1,000 times more common in the Earth than previously thought, report Ayana Archie and Ralph Ellis for CNN. “The deposits sit some 90 to 150 miles below the Earth's surface, much deeper than current mining machinery allows,” write Archie and Ellis.

A team led by MIT research scientist Ulrich Faul ‘discovered a gigantic cache of diamonds deep beneath the Earth’s surface,’ writes Avery Thompson for Popular Mechanics. While the diamonds are too deep to be mined, “knowing that they’re there helps us learn more about our own planet and what it’s made of,” Thompson notes.

By using sound waves, MIT researchers have discovered that part of Earth’s stable crust may contain diamonds, reports Abbey Interrante for Newsweek. “This shows that diamond is not perhaps this exotic mineral, but on the [geological] scale of things, it’s relatively common,” says research scientist Ulrich Faul.