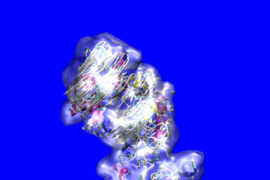 ↓ Download Image
Caption: This diagram depicts the configuration of the complex tropoelastin molecule, which forms the basis for the elastin that gives tissues like skin and blood vessels their elasticity. The molecule’s atom-by-atom structure was decoded by a team of researchers from MIT, Australia and the UK.
Credits: Courtesy of the researchers

Caption:
This diagram depicts the configuration of the complex tropoelastin molecule, which forms the basis for the elastin that gives tissues like skin and blood vessels their elasticity. The molecule’s atom-by-atom structure was decoded by a team of researchers from MIT, Australia and the UK.
Credits:
Courtesy of the researchers

The stretchiness that allows living tissues to expand, contract, stretch, and bend throughout a lifetime is the result of a protein molecule called tropoelastin. Remarkably, this molecule can be stretched to eight times its length and always returns back to its original size.

Now, for the first time, researchers have decoded the molecular structure of this complex molecule, as well as the details of what can go wrong with its structure in various genetically driven diseases.

Tropoelastin is the precursor molecule of elastin, which along with structures called microfibrils is the key to flexibility of tissues including skin, lungs, and blood vessels. But the molecule is complex, made up of 698 amino acids in sequence and filled with disordered regions, so unravelling its structure has been a major challenge for science.

That challenge has been solved by a team of researchers who used a combination of molecular modeling and experimental observation to build an atom-by-atom picture of the molecule’s structure. The results appear this week in the Proceedings of the National Academy of Sciences in a paper by Markus Buehler, the Jerry McAfee Professor in Engineering and head of the MIT Department of Civil and Environmental Engineering; Anna Tarakanova PhD ’17, an MIT postdoc; and three others at the University of Sydney and the University of Manchester.

“The structure of tropoelastin has been elusive,” Tarakanova says. Traditional characterization methods are insufficient for decoding this molecule “because it’s very large, disordered, and dynamic.” But the combination of computer modeling and experimental observations this team used “allowed us to predict a fully atomistic structure of the molecule,” she says.

The study showed how certain different disease-causing mutations in the single gene that controls the formation of tropoelastin change the molecule’s stiffness and dynamic responses, which could ultimately help in the design of treatments or countermeasures for these conditions. Other “artificial” mutations induced by the researchers, that do not correspond to any known naturally occurring mutations, can be used to better understand the function of the specific part of the gene affected by that mutation.

“We’re interested in probing a particular region of the molecule to understand the function of that region,” Tarakanova says. “In addition to imparting elasticity, the molecule plays a key role in cell signaling and cell adhesion, affecting cellular processes which are driven by interactions with specific sequences within the molecule.”

The study also looked at the specific changes in the tropoelastin molecule caused by mutations that are associated with known diseases, such as cutis laxa, in which the skin lacks elasticity and hangs loosely. “We show that a point mutation associated with the disease causes changes in the molecule that have implications — the mechanism of the disease actually stems from the [changes on the] molecular scale,” she says.

“Understanding the structure of this molecule is not only important in the context of disease,” says Buehler, “but can also enable us to translate the knowledge from this biomaterial to synthetic polymers, which can be designed to meet certain engineering needs. Engineering the balance of order and disorder in the context of desired properties could open doors to new designer materials.”

The method they used to unravel the structure of the tropoelastin molecule included a technique based on molecular dynamics modeling and simulation. While that approach has been used to study simpler molecular structures, she says, “this is the first work where we’ve shown that it can be used for a highly disordered molecule the size of tropoelastin, and then validated it against experimental data.”

The techniques they used could be applied to understanding other large, complex molecules, she adds. “More generally, I think this approach is applicable to large molecules with a high degree of disorder — and by some estimates half of the proteins in your body contain regions with a high degree of disorder. This can be a very powerful framework for looking at many kinds of [biological] systems.”

“Intrinsically disordered proteins play important roles in many biological processes, from biomineralization to tissue elasticity,” says Peter Fratzl, a professor and director of the Max Planck Institute of Colloids and Interfaces in Garching, Germany, who was not involved in this research. “Disordered proteins have short-lived structures often in response to the interaction with their environment. Such structures are very hard to investigate experimentally as well as numerically, because computation times can be prohibitive for such large entities.” Fratzl adds that this paper “shows that accelerated-sampling molecular dynamics algorithms represents a real way forward to describe the behavior of such molecules. Elastin and several mutations of this important component of extracellular matrices are studied as a proof of concept with truly convincing results.”

Zsolt Urban, an associate professor of human genetics at the University of Pittsburgh, who also was not connected to this work, says “elastin is necessary for the proper working of stretchy organs such as blood vessels, heart valves, and lungs. However, the full structure of tropoelastin was unknown until now. Tarakanova and coworkers have now solved the structure of tropoelastin at the resolution of atoms. This is a remarkable feat given that tropoelastin consists of more than 8,000 atoms.”

Urban says “Elastin can survive the lifespan of a human, about 75 years, and withstand billions of cycles of stretch and recoil.  A key question for elastin is how its remarkable material properties such as stretchiness, extreme longevity, and endurance come about. This study provides a starting point to answering this intriguing question.”

The research team also included postdoc Giselle Yeo and professor of biochemistry Anthony Weiss at the University of Sydney, Australia, and professor of biochemistry Clair Baldock at the University of Manchester, in the U.K. The work was supported by the National Institutes of Health, the Office of Naval Research, the National Science Foundation, the Australian Research Council, and the Wellcome Trust.