Refining the “science” of political science 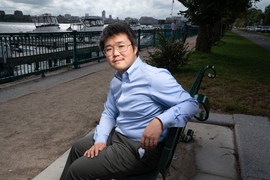 Caption:
“Even if you look at a clean study, the [outcome] is usually a composite of multiple components, any one of which could be actually causing the effect,” says Associate Professor Teppei Yamamoto.
Credits:
Image: Bryce Vickmark

Political pundits are usually confident about their ability to identify why citizens think the way they do. Look at cable television or the internet, and you’ll find someone attributing an election result to economic anxiety, or claiming the latest polling numbers reflect a recent news story.

Teppei Yamamoto has his doubts.

Yamamoto is an associate professor in MIT’s Department of Political Science and an expert in the methodology used by researchers. More specifically, he zeroes in on questions of cause and effect. Yamamoto tries to be as specific as possible: What actually causes the effects we see?

A lot of the time, Yamamoto believes, what might seem to be a single cause actually consists of multiple things tangled together. His work frequently finds ways to separate out these “treatment components,” as he calls them, from one another.

“Even if you look at a clean study, the [outcome] is usually a composite of multiple components, any one of which could be actually causing the effect,” Yamamoto says.

Consider immigration policy. When people oppose immigration, why is that?

“Is it the ethnicity or country of origin that’s changing the effects, or is it something else, like perception of education?” Yamamoto asks. “If people think of immigration as [in terms of] people with lower education flooding to United States, they may not like that, as opposed to [immigrants’] nationality itself,” Yamamoto says.

Then again, it could be perceptions of ethnicity that influence people’s stance on immigration. To scrutinize such things, Yamamoto often uses a method known as “conjoint analysis,” which he has helped introduce to political science. Conjoint analysis examines different combinations of variables to evaluate their relative power; applying it carefully to a political survey, for example, can help ensure researchers are getting inside the minds of voters.

For his research and teaching, Yamamoto was awarded tenure earlier in 2018 at MIT, where he has carved out a valued role as a thinker grappling with highly relevant issues.

The long road to Cambridge

Yamamoto grew up in the city of Maebashi, the regional capital of Japan’s Gunma prefecture, about 70 miles from Tokyo. But his road to academia in the U.S. went via another place altogether: Thailand, where his family spent two years when Yamamoto was a child, from age 7 to age 9. Yamamoto’s father, an engineer, worked in Japan’s development aid agency.

“I can say that developed my interest for living in other countries and looking at different cultures,” Yamamoto says. “I don’t think I was completely conscious of the politics, but I was interested in how things work in society. I was observing differences. That made a strong impact on me in terms of the kind of work I [later] wanted to do, and I wanted to go abroad instead of staying in Japan for my whole life.”

By the time he reached high school back in Japan, Yamamoto wanted to become a diplomat. But at the University of Tokyo, where he studied international relations, Yamamoto became increasingly interested in academic research, something that was enhanced by studying abroad for a year at Oxford University. Soon Yamamoto was accepted into Princeton University’s PhD program in politics, where he began developing his present interests when reading papers for his seminars.

“I often found myself always focusing on the methodology: How does this paper prove what it says? I was interested in making arguments based on that,” Yamamoto says.

Moreover, he found a like-minded professor there, Kosuke Imai (now at Harvard University), who had the same kinds of interests in methodology, helped encourage Yamamoto’s skills, and was a “role model,” as Yamamoto puts it.

“He showed me how to be successful as a political methodologist, as someone who just came from a foreign country, specifically Japan, but he also showed me how to write a paper, how to find a methodological question,” Yamamoto says. “It was very important for me to see a complete path to success.”

Yamamoto joined the MIT faculty after completing his PhD at Princeton and has been at the Institute since 2011; in addition to his appointment as an associate professor, he is director of the Political Methodology Lab at MIT and a faculty affiliate of the Institute for Data, Systems, and Society (IDSS).

While Yamamoto’s methods work has been paired with studies of many particular political issues, he has also spent the last three years involved in a major MIT project  about the effects of news media on political views. The project, funded by the National Science Foundation, is being conducted along with Yamamoto’s political science colleague Adam Berinsky, an expert on political falsehoods.

“The idea is that the American public has been polarized into two extremes in recent decades,” Yamamoto says. The project aims to see if media outlets merely reflect this polarization, or, as many observers have argued, actively contributes to this polarization.

“That’s a plausible explanation, but we do want hard evidence,” Yamamoto says. To that end, he has carefully designed the group’s studies, which he calls “a division of labor that’s been working well.”

To dig away at the issue, the project’s experiments do not just randomly assign people to watch certain types of content, but also give some people their choice of content, so as to better evaluate the effects of media on a variety of people.

“In the real world, people are not randomly assigned to Fox News or MSNBC,” Yamamoto says. “We have to estimate the effect on people who would watch [a channel anyway], as opposed to the standard effects.”

The project is also tracking respondents over time to measure the effects of long-term exposure to certain news channels, for instance — both in terms of political opinions and subsequent viewing choices.

All told, as the leading methodologist in his department, Yamamoto is pleased at the way political science generally has been adopting more complex and subtle research strategies, which he thinks will help it obtain robust results.

“It has transformed things,” Yamamoto says. “A very advanced understanding of methodology is standard for all students in political science at MIT. I think that’s the trend in the discipline as well.” Then he pauses for the punchline: “But I can’t claim it’s my causal effect on things.”

Inside the minds of voters