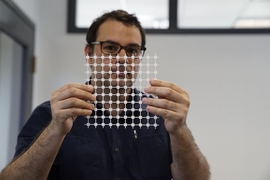 Researchers at MIT’s Little Devices Lab have developed a set of modular blocks that can be put together in different ways to produce diagnostic devices. These “plug-and-play” devices, which require little expertise to assemble, can test blood glucose levels in diabetic patients or detect viral infection, among other functions.

“Our long-term motivation is to enable small, low-resources laboratories to generate their own libraries of plug-and-play diagnostics to treat their local patient populations independently,” says Anna Young, co-director of MIT’s Little Devices Lab, lecturer at the Institute for Medical Engineering and Science, and one of the lead authors of the paper.

Using this system, called Ampli blocks, the MIT team is working on devices to detect cancer, as well as Zika virus and other infectious diseases. The blocks are inexpensive, costing about 6 cents for four blocks, and they do not require refrigeration or special handling, making them appealing for use in the developing world.

“We see these construction kits as a way of lowering the barriers to making medical technology,” says Jose Gomez-Marquez, co-director of the Little Devices Lab and the senior author of the paper.

Elizabeth Phillips ’13, a graduate student at Purdue University, is also a lead author of the paper, which appears in the journal Advanced Healthcare Materials on May 16. Other authors include Kimberly Hamad-Schifferli, an associate professor of engineering at the University of Massachusetts at Boston and a visiting scientist in MIT’s Department of Mechanical Engineering; Nikolas Albarran, a senior engineer in the Little Devices Lab; Jonah Butler, an MIT junior; and Kaira Lujan, a former visiting student in the Little Devices Lab.

Over the past decade, many researchers have been working on small, portable diagnostic devices based on chemical reactions that occur on paper strips. Many of these tests make use of lateral flow technology, which is the same approach used in home pregnancy tests.

Despite these efforts, such tests have not been widely deployed. One obstacle, says Gomez-Marquez, is that many of these devices are not designed with large-scale manufacturability in mind. Another is that companies may not be interested in mass-producing a diagnostic for a disease that doesn’t affect a large number of people.

The Little Devices Lab researchers realized that they could get these diagnostics into the hands of many more people if they created a kit of modular components that can be put together to generate exactly what the user needs. To that end, they have created about 40 different building blocks that lab workers around the world could easily assemble on their own, just as people began assembling their own radios and other electronic devices from commercially available electronic “breadboards” in the 1970s.

“When the electronic breadboard came out, that meant people didn’t have to worry about building their own resistors or capacitors. They could worry about what they actually wanted to use electronics for, which is to make the entire circuit,” Gomez-Marquez says.

In this case, the components consist of a sheet of paper or glass fiber sandwiched between a plastic or metal block and a glass cover. The blocks, which are about half an inch on each edge, can snap together along any edge. Some of the blocks contain channels for samples to flow straight through, some have turns, and some can receive a sample from a pipette or mix multiple reagents together.

The blocks can also perform different biochemical functions. Many contain antibodies that can detect a specific molecule in a blood or urine sample. Those antibodies are attached to nanoparticles that change color when the target molecule is present, indicating a positive result.

These blocks can be aligned in different ways, allowing the user to create diagnostics based on one reaction or a series of reactions. In one example, the researchers combined blocks that detect three different molecules to create a test for isonicotinic acid, which can reveal whether tuberculosis patients are taking their medication.

The blocks are color-coded by function, making it easier to assemble predesigned devices using instructions that the researchers plan to put online. They also hope that users will develop and contribute their own specifications to the online guide.

The researchers also showed that in some ways, these blocks can outperform previous versions of paper diagnostic devices. For example, they found that they could run a sample back and forth over a test strip multiple times, enhancing the signal. This could make it easier to get reliable results from urine and saliva samples, which are usually more dilute than blood samples, but are easier to obtain from patients.

“These are things that cannot be done with standard lateral flow tests, because those are not modular — you only get to run those once,” says Hamad-Schifferli.

The team is now working on tests for human papilloma virus, malaria, and Lyme disease, among others. They are also working on blocks that can synthesize useful compounds, including drugs, as well as blocks that incorporate electrical components such as LEDs.

The ultimate goal is to get the technology into the hands of small labs in both industrialized and developing countries, so they can create their own diagnostics. The MIT team has already sent them to labs in Chile and Nicaragua, where they have been used to develop devices to monitor patient adherence to TB treatment and to test for a genetic variant that makes malaria more difficult to treat.

“By reducing the barriers to designing new point-of-care paperfluidics, the work invites nonexperts in and will certainly result in new ideas and collaborations in settings all around the world,” says Klapperich, who was not involved in the research. “The practical demonstrations of the system presented here are poised to be immediately useful, while the possibilities for others to build on the tool are large.”

The researchers are now investigating large-scale manufacturing techniques, and they hope to launch a company to manufacture and distribute the kits around the world.

“We are excited to open the platform to other researchers so they can use the blocks and generate their own reactions,” Young says.

The research was funded by a gift from Autodesk and the U.S. Public Health Service.

Researchers from MIT’s Little Devices Lab have developed Lego-like devices that can perform diagnostic tests, writes UPI reporter Allen Cone.  The devices could significantly reduce the cost of diagnostic tests and as they don't require refrigeration or special handling, “they could be particularly useful in the developing world.”

Fast Company reporter Adele Peters writes that MIT researchers have designed a kit that allows scientists to develop diagnostic tests quickly and cheaply. The kit, “uses modular blocks that can be connected in different patterns to replicate the function that would typically be built into a manufactured test for pregnancy, glucose, or an infection or other disease.”