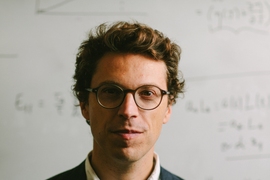 Caption:
A major motivation for moving to MIT from his research position, Nuno Loureiro says, was working with students.
Credits:
Image: Jared Charney

Growing up in the small city of Viseu in central Portugal, Nuno Loureiro knew he wanted to be a scientist, even in the early years of primary school when “everyone else wanted to be a policeman or a fireman,” he recalls. He can’t quite place the origin of that interest in science: He was 17 the first time he met a scientist, he says with an amused look.

By the time Loureiro finished high school, his interest in science had crystallized, and “I realized that physics was what I liked best,” he says. During his undergraduate studies at the IST Lisbon, he began to focus on fusion, which “seemed like a very appealing field,” where major developments were likely during his lifetime, he says.

Fusion, and specifically the physics of plasmas, has remained his primary research focus ever since, through graduate school, postdoc stints, and now in his research and teaching at MIT. He explains that plasma research “lives in two different worlds.” On the one hand, it involves astrophysics, dealing with the processes that happen in and around stars; on the other, it’s part of the quest to generate electricity that’s clean and virtually inexhaustible, through fusion reactors.

Plasma is a sort of fourth phase of matter, similar to a gas but with the atoms stripped apart into a kind of soup of electrons and ions. It forms about 99 percent of the visible matter in the universe, including stars and the wispy tendrils of material spread between them. Among the trickiest challenges to understanding the behavior of plasmas is their turbulence, which can dissipate away energy from a reactor, and which proceeds in very complex and hard-to-predict ways — a major stumbling block so far to practical fusion power.

While everyone is familiar with turbulence in fluids, from breaking waves to cream stirred into coffee, plasma turbulence can be quite different, Loureiro explains, because plasmas are riddled with magnetic and electric fields that push and pull them in dynamic ways. “A very noteworthy example is the solar wind,” he says, referring to the ongoing but highly variable stream of particles ejected by the sun and sweeping past Earth, sometimes producing auroras and affecting the electronics of communications satellites. Predicting the dynamics of such flows is a major goal of plasma research.

“The solar wind is the best plasma turbulence laboratory we have,” Loureiro says. “It’s increasingly well-diagnosed, because we have these satellites up there. So we can use it to benchmark our theoretical understanding.”

Loureiro began concentrating on plasma physics in graduate school at Imperial College London and continued this work as a postdoc at the Princeton Plasma Physics Laboratory and later the Culham Centre for Fusion Energy, the U.K.’s national fusion lab. Then, after a few years as a principal researcher at the University of Portugal, he joined the MIT faculty in the Department of Nuclear Science and Engineering in 2016 and earned tenure in 2017. A major motivation for moving to MIT from his research position, he says, was working with students. “I like to teach,” he says. Another was the “peerless intellectual caliber of the Plasma Science and Fusion Center at MIT.”

Loureiro, who holds a joint appointment in MIT’s Department of Physics, is an expert on a fundamental plasma process called magnetic reconnection. One example of this process occurs in the sun’s corona, a glowing irregular ring that surrounds the disk of the sun and becomes visible from Earth during solar eclipses. The corona is populated by vast loops of magnetic fields, which buoyantly rise from the solar interior and protrude through the solar surface. Sometimes these magnetic fields become unstable and explosively reconfigure, unleashing a burst of energy as a solar flare. “That’s magnetic reconnection in action,” he says.

Over the last couple of years at MIT, Loureiro published a series of papers with physicist Stanislav Boldyrev at the University of Wisconsin, in which they proposed a new analytical model to reconcile critical disparities between models of plasma turbulence and models of magnetic reconnection. It’s too early to say if the new model is correct, he says, but “our work prompted a reanalysis of solar wind data and also new numerical simulations. The results from these look very encouraging.”

Their new model, if proven, shows that magnetic reconnection must play a crucial role in the dynamics of plasma turbulence over a significant range of spatial scales – an insight that Loureiro and Boldyrev claim would have profound implications.

Loureiro says that a deep, detailed understanding of turbulence and reconnection in plasmas is essential for solving a variety of thorny problems in physics, including the way the sun’s corona gets heated, the properties of accretion disks around black holes, nuclear fusion, and more. And so he plugs away, to continue trying to unravel the complexities of plasma behavior. “These problems present beautiful intellectual challenges,” he muses. “That, in itself, makes the challenge worthwhile. But let’s also keep in mind that the practical implications of understanding plasma behavior are enormous.”