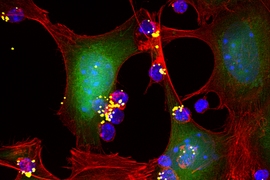 Programming the body’s immune system to attack cancer cells has had promising results for treating blood cancers such as lymphoma and leukemia. This tactic has proven more challenging for solid tumors such as breast or lung cancers, but MIT researchers have now devised a novel way to boost the immune response against solid tumors.

By developing nanoparticle “backpacks” that hold immune-stimulating drugs, and attaching them directly to T cells, the MIT engineers showed in a study of mice that they could enhance those T cells’ activity without harmful side effects. In more than half of the treated animals, tumors disappeared completely.

“We found you could greatly improve the efficacy of the T cell therapy with backpacked drugs that help the donor T cells survive and function more effectively. Even more importantly, we achieved that without any of the toxicity that you see with systemic injection of the drugs,” says Darrell Irvine, a professor of biological engineering and of materials science and engineering, an associate director of MIT’s Koch Institute for Integrative Cancer Research, and the senior author of the study.

Irvine is one of the co-founders of a company called Torque Biotherapeutics that plans to begin clinical trials of this approach this summer. The lead authors of the paper, which appears in the July 9  issue of Nature Biotechnology, are former MIT postdoc Li Tang, who is now at the Swiss Federal Institute of Technology (EPFL), and former MIT grad student Yiran Zheng.

T cells are specialized immune cells that roam the body, identifying and killing infected cells. Cancer researchers have long been intrigued by the possibility of harnessing these immune cells to destroy tumors, through an approach called adoptive T cell therapy. To achieve this, researchers need to be able to create large populations of T cells that can recognize and attack a tumor.

“The general idea is to grow up large numbers of T cells that are tumor specific and then infuse them in patients,” Irvine says.

Researchers have developed two primary ways to create populations of T cells that can attack tumors. One is to remove tumor-specific T cells from a tumor biopsy, grow them in a lab dish, and then return them to the patient. The other is to take circulating T cells from the patient’s blood and either genetically modify them so that they target a protein found on the tumor cell’s surface, or expose them to tumor proteins in hopes that the T cells will become activated against those proteins.

These methods have shown some success against lymphomas and leukemias, but it has proven difficult to generate a strong immune response against solid tumors. Researchers have tried to boost the response to solid tumors by injecting immune-stimulating drugs called cytokines along with the T cells. However, these drugs have harmful side effects, including inflammation, because they tend to stimulate any T cell they encounter. This limits the amount of drug that can be given.

To overcome that, Irvine and his colleagues have been working on techniques to stimulate only the tumor-specific T cells. In 2010, they reported a way to do this by attaching tiny spheres called liposomes to the tumor-targeting T cells. These liposomes carry a cytokine payload that can be released to stimulate only nearby T cells. However, the particles could only carry a small amount of the drug, and they began releasing the drug as soon as the T cells were injected into the body.

For the Nature Biotechnology study, the researchers created a new type of nanoparticle that can carry 100-fold more of the drug and does not release it until after the T cells encounter the tumor. These particles consist of a gel made from molecules of the cytokine IL-15 held together by a cross-linker that is designed to degrade only when the T cell carrying the particles reaches the tumor and becomes activated. This activation is signaled by a chemical change in the surface of the T cells.

“That allowed us to link T cell activation to the drug release rate,” Irvine says. “The nanogels are preferentially dissolving when the T cells are in sites where they see tumor antigen: in the tumor and in the tumor-draining lymph nodes. The drug is most efficiently being released at the sites where you want it and not in some healthy tissue where it might cause trouble.”

The researchers tested this approach in mice whose T cells were genetically engineered to express a T cell receptor that targets a protein found in melanoma tumors. In about 60 percent of the mice, the therapy was so effective that the tumors disappeared completely after multiple treatments. The researchers also showed that attaching the nanoparticles to human T cells that were genetically modified to target glioblastoma cells enabled them to kill glioblastoma cells much more effectively.

The researchers also found that with the nanoparticles, they could give the mice eight times as much IL-15 without side effects, compared to injecting the drug throughout the body.

Torque Biotherapeutics, the company performing clinical trials for this treatment, plans to test it in many different types of tumors. Irvine says the hope is that this approach could work for any solid or blood tumor, as long as there is a known target that can be programmed into the T cells. He now plans to explore whether drugs other than IL-15 might be even more effective at stimulating T cells.

The research was funded by the Ragon Institute of MGH, MIT, and Harvard; the Melanoma Research Alliance; the Koch Institute’s Marble Center for Cancer Nanomedicine; and a Koch Institute Support (core) grant from the National Cancer Institute.

By using “nanoparticle ‘backpacks’ with immune-stimulating drugs,” MIT researchers were able to enhance T cells and destroy solid tumors without harmful side effects, reports Allen Cone of UPI. "We found you could greatly improve the efficacy of the T cell therapy with backpacked drugs that help the donor T cells survive and function more effectively,"explains Prof. Darrell Irvine.

A pharmacy on the back of a cell