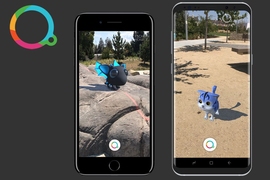 ↓ Download Image
Caption: Escher Reality, co-founded by Ross Finman in the MIT Sandbox, was recently acquired by augmented-reality (AR) giant Niantic — and plans to give back to the program that helped it launch. The startup is developing a platform that allows cross-platform, fully multiplayer AR games that save digital objects in the real world.
Credits: Courtesy of Escher Reality

Caption:
Escher Reality, co-founded by Ross Finman in the MIT Sandbox, was recently acquired by augmented-reality (AR) giant Niantic — and plans to give back to the program that helped it launch. The startup is developing a platform that allows cross-platform, fully multiplayer AR games that save digital objects in the real world.
Credits:
Courtesy of Escher Reality

In spring 2016, the Institute launched MIT Sandbox, a program that provides fledgling entrepreneurs with funding, mentorship, education, and other support to help shape and launch early-stage ventures.

Two years later, the program is celebrating a major entrepreneurial milestone: Escher Reality, an augmented-reality (AR) startup from the first Sandbox cohort, has been acquired by an AR-game-developer giant — and plans to give back to the program that helped it launch.

Escher is developing a back-end platform for AR that allows, for the first time, cross-platform and fully multiplayer games. It also enables “persistent experiences,” as the startup calls them, in which an AR game remembers where a user places digital objects in a physical play area — to return to, or for others to find — and recognizes when other users, connected on other devices, interact with those objects.

On Feb. 1, the startup announced that it sold to Niantic, the major AR-game developer, founded by ex-Google engineers, that’s behind 2016’s massive hit “Pokémon Go.”

Of the roughly 700 startups that so far have gone through Sandbox, several have raised significant rounds and are generating revenue, but Escher is the first that’s penned an exit deal. Attributing part of its early success to Sandbox — especially as a startup operating in a very young industry — Escher co-founders are now giving back to the program.

“The Sandbox is phenomenal,” says Ross Finman, who co-founded Escher with Diana Hu, a graduate of Carnegie Mellon University. “It gives students freedom to explore any idea … and funds and mentorship and a bunch of resources to work with. If someone wants to pursue something, there’s no reason they can’t do it. We are excited to be the first exit coming out of Sandbox and to be the first ones giving back.”

Sandbox aims to open pathways for a range of student innovators, who may have an idea, an experimental technology, or even a specific startup in mind. Sandbox connects students with educational experiences and mentoring, and provides up to $25,000 in funding. Sandbox collaborates with other MIT programs, such as the Martin Trust Center for MIT Entrepreneurship, the Venture Mentoring Service (VMS), and the Gordon Engineering Leadership Program. The program accepts three cohorts per year, in the spring, summer, and fall.

Participating entrepreneurs sign a voluntary pledge to give back if they find success outside the program. Escher plans to give back more than originally pledged. The gift means a lot, emotionally and practically, says Jinane Abounadi, executive director of Sandbox.

“On the emotional side, we’re so proud of the outcome and proud to have been part of the journey,” she says. On the practical side: “Our assumption is that when people are able to give back, they will, so the next generation of students has the same opportunities. That the first company that exits is generously giving back — it validates that assumption.”

Vice Chancellor Ian A. Waitz, now faculty director of Sandbox, who launched the program as dean of the School of Engineering, met Finman at the inception of the program, but a couple years before its launch. “In the interim, he sent me 43 emails asking, ‘When will it happen? We really need this!’” Waitz says. “His passion and enthusiasm are part of what drove the effort forward, the same way they have driven Escher forward. So, it is a wonderful coincidence that his team is the first Sandbox team to have an exit.”

Entrepreneur from the start

At MIT, Finman was deeply involved in the entrepreneurial ecosystem — including as a student advisor during the formation of Sandbox.

In 2014, he was on the founding team of StartMIT (then Start6), founded by Anantha Chandrakasan, the current dean of the School of Engineering and the Vannevar Bush Professor of Electrical Engineering and Computer Science, along with other students, faculty, and administrators. The Independent Activities Period program provides students and postdocs opportunities to participate in venture-building activities and attend events with alumni and Boston innovation leaders. Participants also work with mentors and take field trips to local startups to explore the culture.

StartMIT organizers noted Finman’s enthusiasm. When Abounadi started to put together a student advisory group for Sandbox in 2015, Finman’s name immediately came up from Waitz, who was a key organizer of StartMIT. “I got an email from Ian that told me to contact Ross because he was so passionate about entrepreneurship,” she says.

Finman provided Sandbox organizers with insights into what resources students may need to succeed. For Finman, the opportunity to help was indicative of MIT’s student-focused ecosystem. “MIT is always asking, ‘What do students need?’” he says.

Around the same time Sandbox launched, Finman and Hu were drafting startup ideas. The co-founders had met as undergraduates studying artificial intelligence and computer vision at Carnegie Mellon years before. After graduating, Hu worked as an engineer at Intel, while Finman enrolled at MIT, where he developed advanced computer vision algorithms for robots in the Computer Science and Artificial Intelligence Laboratory’s Marine Robotics Group.

In early 2016, the two decided to bring their combined computer vision experience to a then-emerging field: AR. Most technological development and funding was focused on virtual reality at the time, Finman says, while very few startups were developing AR technologies. “We decided to be contrarian,” he says.

Founding Escher that spring, they were accepted to Sandbox in the first summer cohort, with only a vague idea for advancing AR capabilities. Then, that July, “Pokémon Go” took the world by storm. “That’s when things really took off,” Finman says. “We said, ‘How do you take this to the next level?’”

In and out of Sandbox

Playing “Pokémon Go,” the two noticed a few lacking features: multiplayer and cross-platform capabilities, and the ability to save games.

In Sandbox, the team developed early proof of concepts. To fix the cross-platform issue, they developed a “unifying layer” that connects disparate devices to the same game. To provide multiplayer capabilities, they found a way to synchronize devices with low latency. Then they used algorithmic techniques to help each device recognize where, say, one Pokémon character is in relation to the other in the real world.

The other issue — “a freakishly hard problem,” Finman says — was saving games. When players exit an AR game, they lose all data and need to start over. The startup developed algorithms that let devices always recognize the exact spot where a digital object had been in a physical space, each time a game is restarted.

But perhaps more importantly, Finman says, the co-founders in Sandbox worked on marketing the technology in an industry that was just getting its footing. “In early days, it was putting together demos of user interfaces for developers and gamers,” he says. “For the early markets that many MIT companies go after, you have to ask, ‘How do you get it out to customers?’”

That Sandbox work got Escher that fall into the National Science Foundation’s I-Corps Program, hosted on campus by the VMS. Over the course of the program, they interviewed 100 AR and game developers in about seven weeks, which really helped them understand the market.

In June 2017, Escher joined Y Combinator, a seed accelerator in Silicon Valley. That August, Apple released its ARKit for AR software developers. Then, the many AR limitations — such as lack of multiplayer and cross-platform capabilities — that Escher had been working on for well over a year became apparent to developers. That caught the eye of Niantic, which quickly scooped up the startup.

Now the Escher team of six joins Niantic’s AR development team, as Niantic gears up for the 2018 release of its next title, “Harry Potter: Wizards Unite.”

“[Niantic] has been a trailblazer of AR and getting people excited about AR. That’s why it’s such a good match for us,” Finman says, adding, “Because who doesn’t want to play wizard battles in the real world?”

For Abounadi, Escher’s story is a prime example of what Sandbox stands for. Escher entered the program with only an idea for a brand-new technology that had no definite application in an emerging industry. “We expect that a good portion of the ideas people work on in Sandbox will fit exactly that mold,” she says. “Because it’s MIT, and we have people pushing the boundaries on new technologies.”

Summer in the Sandbox