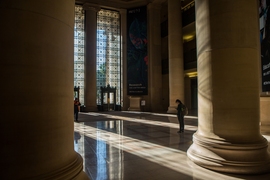 U.S. News and World Report has placed MIT third in its annual rankings of the nation’s best colleges and universities, which were announced today. The Institute has moved up from the No. 5 spot it occupied last year. Columbia University, the University of Chicago, and Yale University also share the No. 3 ranking.

MIT also remains the No. 2 undergraduate business program, sharing the spot with the University of California at Berkeley. Among business subfields, MIT is ranked No. 1 in three specialties.

In the overall institutional rankings, U.S. News placed Princeton University in the No. 1 spot, followed by Harvard University.

MIT ranks as the third most innovative university in the nation, according to the U.S. News peer assessment survey of top academics. The Institute is also third on the magazine’s list of national universities that offer students the best value, based on the school’s ranking and the net cost of attendance for a student who received the average level of need-based financial aid, and other variables.

Other schools in the top five overall for undergraduate engineering programs are Stanford University, Berkeley, Caltech, and Georgia Tech.

Among undergraduate business specialties, the MIT Sloan School of Management leads in management information systems; production/operations management; and quantitative analysis/methods. It ranked second in entrepreneurship and third in finance and supply chain management/logistics.

MIT was named one of the top three colleges in the country on U.S. News & World Report’s annual list of the best colleges, reports Felicia Gans for The Boston Globe. Gans notes that, “MIT was also ranked first for best engineering programs.”

Spencer Buell of Boston magazine reports that Massachusetts colleges are among the best in the country according to U.S. News and World Report’s latest rankings, with MIT being named the number three school in the country.