A new building at 314 Main Street for the MIT Museum, Boeing, and others brings Cambridge and MIT together for memorable HUBweek celebration.
MIT News Office
Publication Date:
Press Inquiries 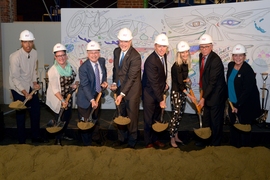 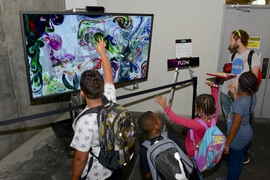 Now in its fourth year, HUBweek is a “festival of the future” that celebrates science, art, and technology. MIT is a founding sponsor, along with Harvard University, The Boston Globe, and Massachusetts General Hospital. This year’s theme was “We the Future.” The Kendall Square/MIT Innovation Playground and 314 Main Street Ground-breaking showcased the Institute’s innovative spirit right in the historic heart and future hub of MIT and Kendall Square.

The day began with a sold-out MIT Club of Boston event called “Inside the Dome: MIT and the Future of Kendall Square.” Israel Ruiz, MIT’s executive vice president and treasurer, joined with Katie Rae, CEO and managing partner of The Engine; Steve Marsh, managing director of real estate; Elisabeth Reynolds, executive director of the MIT Industrial Performance Center; Muriel Médard, the Cecil H. Green Professor of Electrical Engineering and Computer Science; and over 200 attendees to discuss MIT’s role in the transformation of Kendall Square and their collective vision for its future.

The tone for the rest of the day was set by the energetic buzz at the eight-hour-long “Innovation Playground.” The event was one of MIT’s HUBweek “Open Doors” offerings and took place inside the Institute’s graduate student housing construction site in the middle of Kendall Square.

The raw space, which will one day house a public food hall, was a perfect backdrop for a lineup of activities including digital portals to people around the world, a life-size coloring book, a learn-how-to-DJ station, a make-your-own unity print station, digital graffiti, augmented and virtual reality, a bank of old-fashioned phones sharing snippets of history, a Boeing autonomous vehicle exhibit, a GIF booth, a collection station for a time capsule, an open space brainstorming station, and an MIT-designed interactive art piece, “Flow,” created by MIT alumnus Karl Sims.

About 650 people came through the Innovation Playground during the course of the afternoon to play, explore, and socialize. Attendees say the experience felt part nightclub, part museum, and part coffee shop. Some stayed for hours.

In the evening, over 200 people joined together for an unconventional ground-breaking ceremony for the Institute’s 314 Main Street building, which is a key component of MIT’s Kendall Square Initiative. The building will be the future home of the new MIT Museum, the Boeing Aerospace and Autonomy Center, and other innovative tenants. Attendees watched the speaking program while others continued to play games, and about 60 neighborhood children and youth from the nearby Margaret Fuller Neighborhood House, East End House, Innovators4Purpose, and Community Art Center participated enthusiastically in the proceedings. When asked why MIT likes the 314 Main Street address, one child told the crowd that she knew that it was the number representing Pi or π.

“I haven’t been to all that many ground-breakings,” said MIT Museum Director John Durant, “but this event is a mash-up, and I’m so happy about that. It reflects the spirit and philosophy of the museum.”

MIT Provost Martin Schmidt described the surrounding context for the 314 Main Street building. It will be located next to a redesigned MBTA head house in the new MIT/Kendall gateway area, and across from the Institute’s new graduate student residence hall, now under construction. A “new front door” will lead to an inviting open space area that will be programmed to showcase the innovative spirit of MIT. “When it’s all done, no one will ever come up from the MBTA again and ask “Where is MIT?’”

Schmidt also summarized MIT’s long-term relationship with Boeing: “The MIT/Boeing relationship is over a century old — we have been problem-solving and advancing technologies together for a long time. In this new chapter of our relationship, Boeing will be focused on autonomous vehicles and artificial intelligence-enabled air travel. We are thrilled that they have decided to join us here in Kendall.”

Boeing Chief Technology Officer Greg Hyslop said: “We at Boeing are again embracing our inner startup. We’ve started an organization called NeXt, and we’re pushing forward with a new breed of autonomous vehicles and new concepts in AI-enabled airspace. We see fundamental changes coming in how people and goods move from place to place.”

Aurora Flight Sciences, which is part of the Boeing Company, will be moving its Kendall-based research and development center into the new building. John Langford, Aurora Flight Sciences founder, chief executive officer, and MIT alumnus said: “Today, Aurora’s Kendall Square team is already building innovative autonomous systems. By expanding Aurora’s 30-year relationship with MIT, and working with Boeing, we are creating a collaborative space where engineers, students and researchers can work together to create technologies that will define the next-century of air mobility.”

At the start of the ground-breaking program, Sarah Gallop, MIT’s co-director of government and community relations, invited Cambridge Mayor Marc McGovern to join her and Durant on stage.

Durant announced that membership to the MIT Museum will be free to all Cambridge residents once it opens its doors in 2021. “Fantastic!” said the mayor. “That is very good and welcome news for our whole community. Thank you, MIT!”

The Community Art Center (CAC), located in the Cambridge neighborhood known as “The Port,” runs youth programs that create community-sourced public art installations. MIT has worked with CAC youth in the Teen Media Program on several murals that have been displayed at MIT construction sites over the past few years. The most recent creation is a 360-foot “Walls of Unity” mural that stretches along Main Street in front of the graduate student housing construction site and 314 Main Street. The mural, part of the CAC’s “Creative Current” initiative, depicts images of unity that have been created by young artists in the organization’s apprenticeship program and members of the MIT and Cambridge communities.

CAC Executive Director Eryn Johnson shared her perspective on the unique endeavor. “We are grateful to MIT for generously partnering with us. It’s extremely meaningful for our young artists to have their creations featured so prominently in Kendall Square.” William Gallop, one of the CAC apprentices, said: “I never thought I’d see my work displayed in public like that. It makes me feel empowered to be able to put my artistic voice towards good purposes.”

Mayor McGovern said “William, thank you — keep on doing what you’re doing! And Eryn Johnson, you are a stalwart leader and role model in our community.”

Architects Weiss/Manfredi and Perkins+Will designed the new 437,000 square foot commercial lab building at 314 Main Street, and Turner Construction Company is constructing the facility. Expected to be completed in 2020, the 250-foot high building will house the MIT Press Bookstore, a restaurant, and a café, in addition to the MIT Museum and Boeing. Other forward-looking companies are expected to sign on as tenants in the coming months.

Höweler + Yoon Architecture designed the interior museum space, which will be located on the first, second, and third floors and will include exhibition and public programs space, classrooms, a store, and space for administration and collections research.

MIT and HUBweek showcase ideas and innovators making the future