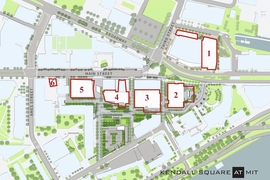 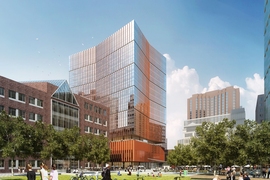 Boeing, the world’s largest aerospace company, will soon become part of the MIT/Kendall Square innovation fabric. The company has agreed to lease approximately 100,000 square feet at MIT’s building to be developed at 314 Main St., in the heart of Kendall Square in Cambridge.

The agreement makes Boeing the first major tenant to commit to MIT’s Kendall Square Initiative, which includes six sites slated for housing, retail, research and development, office, academic, and open space uses. The building at 314 Main St. (“Site 5” on the map above) is located between the MBTA Red Line station and the Kendall Hotel. Boeing is expected to occupy its new space by the end of 2020.

“Our focus on advancing the Kendall Square innovation ecosystem includes a deep and historic understanding of what we call the ‘power of proximity’ to address pressing global challenges,” MIT Executive Vice President and Treasurer Israel Ruiz says. “MIT’s president, L. Rafael Reif, has made clear his objective of reducing the time it takes to move ideas from the classroom and lab out to the market. The power of proximity is a dynamic that propels this concept forward: Just as pharmaceutical, biotech, and tech sector scientists in Kendall Square work closely with their nearby MIT colleagues, Boeing and MIT researchers will be able to strengthen their collaborative ties to further chart the course of the aerospace industry.”

Boeing was founded in 1916 — the same year that MIT moved to Cambridge — and marked its recent centennial in a spirit similar to the Institute’s 100-year celebration in 2016, with special events, community activities, and commemorations. That period also represents a century-long research relationship between Boeing and MIT that has helped to advance the global aerospace industry.

Some of Boeing’s founding leaders, as well as engineers, executives, Boeing Technical Fellows, and student interns, are MIT alumni.

Earlier this year, Boeing announced that it will serve as the lead donor for MIT’s $18 million project to replace its 80-year-old Wright Brothers Wind Tunnel. This pledge will help to create, at MIT, the world’s most advanced academic wind tunnel.

In 2017, Boeing acquired MIT spinout Aurora Flight Sciences, which develops advanced aerospace platforms and autonomous systems. Its primary research and development center is located at 90 Broadway in Kendall Square. In the new facility at 314 Main St., Boeing will establish the Aerospace and Autonomy Center, which will focus on advancing enabling technologies for autonomous aircraft.

“Boeing is leading the development of new autonomous vehicles and future transportation systems that will bring flight closer to home,” says Greg Hyslop, Boeing chief technology officer. “By investing in this new research facility, we are creating a hub where our engineers can collaborate with other Boeing engineers and research partners around the world and leverage the Cambridge innovation ecosystem.”

“It’s fitting that Boeing will join the Kendall/MIT innovation family,” MIT Provost Martin Schmidt says. “Our research interests have been intertwined for over 100 years, and we’ve worked together to advance world-changing aerospace technologies and systems. MIT’s Department of Aeronautics and Astronautics is the oldest program of its kind in the United States, and excels at its mission of developing new air transportation concepts, autonomous systems, and small satellites through an intensive focus on cutting-edge education and research. Boeing’s presence will create an unprecedented opportunity for new synergies in this industry.”

The current appearance of the 314 Main St. site belies its future active presence in Kendall Square. The building’s foundation and basement level — which will house loading infrastructure, storage and mechanical space, and bicycle parking — is currently in construction. Adjacent to those functions is an underground parking garage, a network of newly placed utilities, and water and sewer infrastructure. Vertical construction of the building should begin in September.

At 250 feet high, the new 17-floor building will accommodate additional commercial tenants, as well as the MIT Museum, which will occupy over 57,000 square feet on the building’s ground, second, and third floors. The ground floor is designed to feature retail and restaurant uses, including the entrance to the new home for the MIT Press Bookstore.

“Boeing will be a great addition to the Kendall Square innovation ecosystem, “ says Steve Marsh, managing director of MIT’s real estate group. “Boeing has chosen to locate at the new gateway to MIT’s campus being developed above the Kendall MBTA station. This is as close to MIT’s campus as industry innovators can physically get, and that helps promote important collaborations.”

On the other side of the MBTA station, MIT’s new graduate residence hall (“Site 4” on the map above) is already going up. The Institute decided to lead with that 450-unit facility in response to community interest in expanding on-campus housing inventory for graduate students. That building will also serve to shape the East Campus gateway by creating new homes for MIT’s Admissions Office, an innovation and entrepreneurship hub, a childcare center, active retail concepts, and the MIT Forum, which will provide shared space for community programming.

Tying these buildings together will be an outdoor space well over two acres. The area will feature a combination of hard and soft landscape treatments accompanied by art installations, interactive science experiments, inventions, and other engaging and surprising elements showcasing MIT’s innovative and welcoming spirit. The Institute has recently hired Jessie Schlosser Smith as its new director of open space programming; she is already beginning to collaborate with faculty, students, staff, and members of the Cambridge community to envision memorable programming for the outdoor spaces.

Boeing will establish a research center in one of MIT’s new buildings in Kendall Square, reports Zeninjor Enwemeka for WBUR. Provost Martin Schmidt explains that Boeing’s proximity to campus offers MIT, “a research partner, somebody who brings very interesting and important problems in future transportation systems.”

“One of the biggest names in aerospace is coming to MIT’s front door,” writes Boston Globe reporter Tim Logan, explaining that Boeing will lease space in one of the buildings MIT is developing in Kendall Square. “We want to bring corporate partners to the edge of our campus to facilitate stronger and deeper interactions with our community,” says Provost Martin Schmidt.

Boeing plans to open a research center in a new building being developed as part of MIT’s Kendall Square Initiative, reports Katrina Lewis and Julie Johnsson for Bloomberg News. Johnsson and Lewis explain that, “the center will support research for Boeing NeXt, an initiative aimed at a new wave of flying technologies.”