Announcement delivers on a key commitment by the Institute to the Cambridge community.
MIT News Office
Publication Date:
Press Inquiries 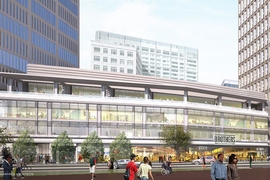 Caption:
Kendall Square will soon be the home of the new Roche Brothers grocery store.

MIT’s Kendall Square Initiative delivered on a key commitment to the Cambridge community today with the announcement of a fully executed lease with Roche Bros. Supermarkets to open a Brothers Marketplace at One Broadway. A grocery store was the most requested retail use specified by neighborhood residents, local employees, and students during the zoning process for MIT’s Kendall Square development.

The 19,000-square-foot Brothers Marketplace is expected to open in summer 2019. The ground floor of One Broadway is currently under construction to make room for the future grocer, as well as a repositioned lobby, a restaurant, and a new home for Dunkin Donuts. The One Broadway renovations are part of a larger development at the site, which will include 300 residential units and an additional 12,800 square feet of retail.

“The community’s desire for a grocery store was raised in every conversation that we had with stakeholders during our zoning process,” says Steve Marsh, managing director of MIT’s Real Estate Group, which oversees MIT’s Kendall development. “It is so important to those who live and work in Kendall that we worked to incorporate it in the earliest possible phase of our development. Going forward, we believe that the market will also serve as an anchor for other retail that contributes to a vibrant neighborhood and greater sense of place in the square.”

Brothers Marketplace brings an innovative approach to food, with a nod to the legacy of small neighborhood markets from long ago. Shoppers will find grocery essentials and favorite national brands alongside unique offerings in prepared foods made in-store, baked goods, fresh produce, local seafood, antibiotic- and hormone-free meats, local and international cheeses, and offerings from local producers, such as Cambridge’s own Iggy’s Bread and Bonnie’s Jams. Brothers Marketplace provides busy customers the ability to purchase grab-and-go items quickly while also offering an experiential setting for lingering and savoring an array of seasonal foods.

The new market is expected to bring about 50 jobs to the neighborhood. Roche Bros. has a long history of working closely with the communities it serves around philanthropy and employment opportunities. The company has won numerous awards for job quality and workforce development. Its partnership with the Chinese Progressive Association and Boston Chinatown Neighborhood Center, for example, offered immigrant workers the chance to learn English while working in the company’s Downtown Crossing location.

“We are excited to open our Brothers Marketplace store in Kendall Square and meet the local community’s longstanding need for a grocery store,” says Rick Roche, co-owner and CEO of Roche Bros. “The MIT Kendall Square neighborhood is a dynamic and growing community, and we hope our neighborhood market becomes a favorite grocery and dining experience for area residents and businesses.”

Currently, residents must travel to other market locations outside of the Kendall Square area to shop for food. Longtime East Cambridge resident Al Disidoro describes the difference that the Brothers Marketplace will make: “Now, it will be much easier for my family to pick up items that we need, and we won’t have to plan a trip just for basic groceries. This market will mean a lot to the neighborhood, and we’re grateful to MIT for listening to us and making it happen.”

Cambridge City Councilor Tim Toomey, who has advocated for the needs of East Cambridge residents for nearly three decades, expresses his enthusiasm for the new market, saying, “This will be tremendously helpful to the residents of the area. The market will fill a gap that has existed for many years, and its presence will bring a very positive impact to the neighborhood. I commend MIT for leading with this project.”

MIT’s Kendall Square Initiative, which was granted special permit approval by the City of Cambridge in May 2016, aims to foster a vibrant mixed-use district featuring six new buildings on what are now MIT-owned parking lots in the East Campus/Kendall Square area, including three buildings for research and development, two for housing, and one for retail and office space. When built out, it will add 1.8 million square feet of lab, office, residential, retail, cultural, and academic space, as well as 2 acres of programmed open space, to the already thriving district.

Boston Globe reporter Tim Logan writes that Roche Bros. Supermarkets will open a Brothers Market in MIT’s One Broadway Building. Steve Marsh, managing director of MIT’s Real Estate Group, explained that a grocery store was, “so important to those who live and work in Kendall that we worked to incorporate it in the earliest possible phase of our development.”