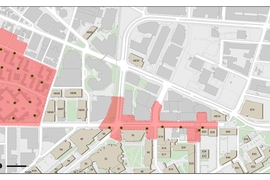 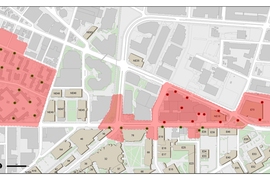 ↓ Download Image
Caption: Highlighted areas show the total Wi-Fi coverage area that will be completed in 2018.
Credits: Courtesy of MIT

Caption:
Highlighted areas show the total Wi-Fi coverage area that will be completed in 2018.
Credits:
Courtesy of MIT

Through a unique collaboration among MIT, Google, Boston Properties, the City of Cambridge, and the Cambridge Housing Authority (CHA), an open and free-of-charge Wi-Fi network is now available in the Kendall Square area and the Newtowne Court and Washington Elms public housing neighborhoods.

The idea, originally brought to MIT and others by Google, took three years to execute because of the intricate work involved in building out fiber networks to provide connectivity to outdoor wireless access points. MIT took on the infrastructure challenge and spearheaded the project. The MIT-led team worked cooperatively with the City of Cambridge, the Cambridge Housing Authority, Boston Properties, Alexandria Real Estate Equities, and others to take advantage of ongoing construction activity so that multiple duct banks could be built over time to connect properties in the Wi-Fi coverage areas. Ultimately, MIT will host and maintain Kendall Wi-Fi within its existing network system.

“The effort required patience,” reflects Israel Ruiz, MIT’s executive vice president and treasurer. “Our Information Systems and Technology team worked carefully and diligently to put the necessary pieces in place. I am grateful for their steady work and for our strong partnership with Google, Boston Properties, and Cambridge. That collaboration, including with the Cambridge Housing Authority, has created a vital amenity for Kendall Square and nearby residents.”

From the outset, the coverage was designed to extend to outdoor areas of the Newtowne Court and Washington Elms neighborhoods. "According to city data from 2014, 30 percent of CHA residents don't have internet access,” observes Liz Schwab, head of external affairs for Google Cambridge. “Projects like this can help fill that need. Access to the internet is critical, whether it's to complete homework, search for a job, or get important municipal updates. We're happy to support installation of a Wi-Fi network that will significantly increase internet access for our neighbors here in Cambridge." In conjunction with the outdoor Wi-Fi coverage, connectivity will also be made available at the Pisani Center, which is the community facility in the Washington Elms neighborhood.

The initial phase of the Kendall Wi-Fi network also covers the newly created Grand Junction Park at the corner of Main Street and Galileo Galilei Way, to which MIT contributed $500,000 in conjunction with its Kendall Square Initiative zoning agreement. Phase 2 of Kendall Wi-Fi, which is expected to be completed in 2018, will further connect areas within Kendall Square between Main Street and Broadway, and will reach out to the One Broadway vicinity including the Broad Canal recreational area.

“Kendall Square is one of the most connected neighborhoods on the planet,” remarks Bryan Koop, Boston Properties’ executive vice president for the Boston region. “Boston Properties is thrilled to be partnering with Google, MIT, and the City of Cambridge to provide access and extend connectivity to all residents in the area.”

Since the network investment was a truly collaborative venture, residents and city leaders will join with MIT, Google, and Boston Properties to celebrate Kendall Wi-Fi at a Nov. 29 dinner event hosted by the Cambridge Housing Authority at the Pisani Center. Greg Russ, executive director of the CHA, helped to plan the festivities. “We have invited all residents from Washington Elms and Newtowne Court to attend the event so they can be aware of the new service and celebrate its creation, along with all the sponsors. On behalf of our community, I am thankful for the addition of this critically important service. It will make a big difference in the lives of our residents.”

At the event, Mayor E. Denise Simmons will officially announce the launch of Kendall Wi-Fi. “It’s heartening to see our business and institutional partners coming together to support the residential community in this manner,” the mayor says. “This collaboration will bring a high-impact benefit for our families in the Washington Elms and Newtowne Court neighborhoods. More and more, we are seeing just how truly critical it is for people to have reliable internet access, which is why I am so pleased to see this service being implemented.”

Writing for The Boston Globe, Sacha Pfeiffer highlights how MIT has partnered with Google, the City of Cambridge, Boston Properties, Alexandria Real Estate Equities and several other organizations to provide free high-speed Wi-Fi in Kendall Square and at the Newtowne Court and Washington Elms public housing developments.