Outside the kyudo dojo, Demarly is patiently zeroing in on another kind of target: a robust set of algorithms that will help simulate the turbulent conditions inside nuclear reactors.

“My formulations translate the physics of different boiling phenomena into a useful model,” says Demarly. “I keep advancing the formulation, because we must have a model that works in all kinds of reactor conditions, including different power levels, flow rates, coolant temperatures, and pressures.”

Demarly’s efforts in generating physically realistic computer simulations may soon enable current generation reactors to operate more efficiently. It is research that could also assist in the design of new and more powerful nuclear reactors. His research, under the supervision of Emilio Baglietto, the Norman C. Rasmussen Associate Professor of Nuclear Science and Engineering, is part of a larger, long-term initiative funded by the U.S. Department of Energy, through the Consortium for Advanced Simulation of Lightwater Reactors (CASL), for which Baglietto serves as thermal hydraulics focus-area lead. 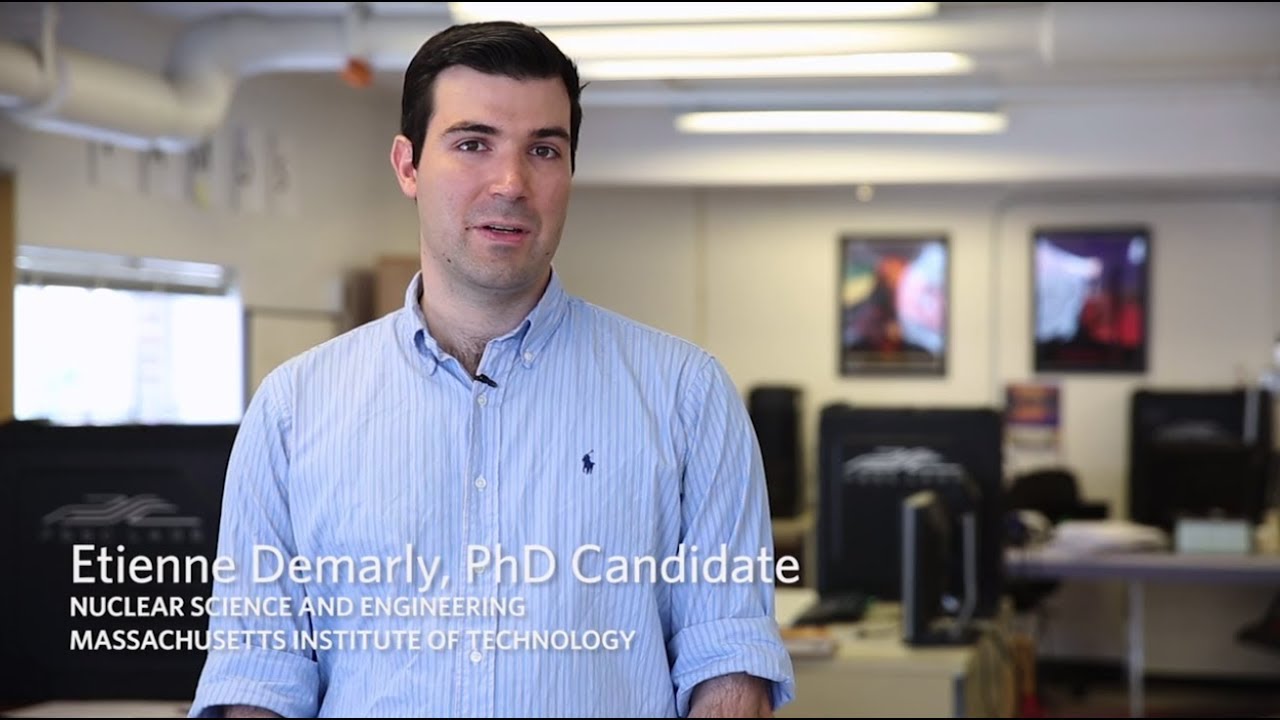 Demarly is helping attack a decades-old problem in nuclear energy. Nuclear reactors generate heat through atomic fission occurring in fuel assemblies that are surrounded by water or other fluids. As nuclear components heat up the liquid, bubbles form on the surface of these assemblies, producing steam. This transfer of heat through steam powers turbines that produce electricity. It is a process that proves manageable — up to a point.

“A boiling crisis can occur in nuclear reactors, which is difficult to predict in all possible conditions,” explains Demarly. “It involves the point at which steam forms a blanket, like an insulator, that produces a big spike in the temperature of the heating surface, threatening to melt the fuel.”

To avoid such a crisis, nuclear reactor operators adopt very broad safety margins, running plants at lower power levels, and as a result, generating less energy. “Utilities and nuclear companies would like to bring that uncertainty bound down,” says Demarly. “Our research goal is to develop models that capture and predict the very chaotic and complex physics leading to a boiling crisis, so we can reduce uncertainty for operators.”

Two major advances are boosting efforts to achieve this goal. First, recent experiments at MIT and elsewhere provide visual proof that when a boiling crisis begins, tiny dry spots forming under bubbles on the surface of fuel assemblies can expand and cover a large surface. These dry areas pose a direct threat to the fuel assemblies.

The second advance is in computation. “In the 1960s and 1970s, modeling of reactors involved the simplification of the complex geometries of fuel assemblies, and therefore the use of large safety margins” says Demarly. “But now we have computers powerful enough to produce simulations to characterize this complexity.”

Using Computational Fluid Dynamics (CFD) — a software domain in which Baglietto and his team specialize — Demarly says scientists can “swiftly resolve the complex geometries inside nuclear reactor systems, coding the full distribution of fluid flow everywhere, from the generation of steam to the production of dry spots.”

Writing, running and tweaking programs comes naturally to Demarly. He grew up in a Paris suburb, where, he says, “my big passion was building and maintaining computers, and playing computer games.” In middle school, he set up library computers, and pursued a mathematics, engineering and physics track, which landed him at one of France’s elite science and engineering universities, the École supérieure d’électricité, or Supélec.

Demarly’s professional interest in nuclear energy emerged quickly during college. He enrolled in the Institut National des Sciences et Techniques Nucleaires for his master’s degree. There he secured a nine-month internship at MIT. “I had never been to the U.S. before, and the novelty appealed to me,” he says. It was an experience that proved life-altering.

“I met with Emilio Baglietto, who had recently joined the faculty and was setting up his group,” recalls Demarly. “He had just received delivery of a computer cluster, so I immediately got to work physically assembling machines.”

Demarly was not adept just at hardware. He quickly picked up Baglietto’s computational methods, which he applied in research aimed at improving the design and performance of steam generators. “These are big pieces of equipment with thousands of tubes arranged in a complicated geometry,” he says. “Nobody had tackled simulation of steam generators before at this level.”

With his rapidly expanding grasp of computational fluid dynamics, and a keen interest in solving key problems in the nuclear energy industry, Demarly returned to MIT and the Baglietto group for his doctorate. Today he is refining a novel set of software codes with the potential to simulate a wide range of conditions (heat flux, mass flow, pressure, temperature) that affect the behaviors of steam and bubbles inside a reactor.

“I’ve got a good framework now that enables me to quickly test new ideas, and eventually it will be able to model and predict most cases correctly,” he says. It is work that industries are already eager to adopt and apply to operating reactors, notes Demarly. It could also save companies millions of R&D dollars that are now spent prototyping next generation reactor components based on less predictive simulations.

With his innovative algorithms in hand, Demarly hopes to work in the nuclear industry after receiving his doctorate. But there are other opportunities as well. “Thermal hydraulics is increasingly important for big computing companies like IBM and Google that hope to reduce and improve the cooling performance of their cluster systems,” he says. With his expertise in fluid dynamics and computing, the tech world beckons.

For now, Demarly is focused on perfecting his simulations. “There have been roadblocks every step of the way, and it’s a long process,” he says “But I like making something from scratch, something real and useful,” he says.

From coolants to a carbon-constrained world