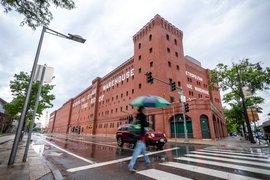 ↓ Download Image
Caption: MIT has identified the Metropolitan Storage Warehouse as a potential new location for the School of Architecture and Planning (SA+P). The proposed move would let the Institute create a new hub for design research and education, allow the school to expand its full range of activities, and open new spaces for public use.
Credits: Photo: Bryce Vickmark 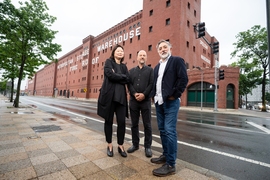 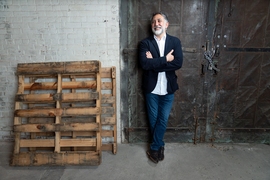 ↓ Download Image
Caption: “It’s about really creating a design hub for MIT on the campus, bringing a design culture to the forefront, and bringing the different areas of design together in one space. Moving does not address just the school’s aspirations, but MIT’s aspirations," says Hashim Sarkis, dean of the School of Architecture and Planning.
Credits: Photo: Bryce Vickmark

Caption:
MIT has identified the Metropolitan Storage Warehouse as a potential new location for the School of Architecture and Planning (SA+P). The proposed move would let the Institute create a new hub for design research and education, allow the school to expand its full range of activities, and open new spaces for public use.
Credits:
Photo: Bryce Vickmark

MIT has identified the Metropolitan Storage Warehouse as a potential new location for the School of Architecture and Planning (SA+P). The proposed move would let the Institute create a new hub for design research and education, allow the school to expand its full range of activities, and open new spaces for public use.

The building would need renovation, a process that would require approval from the City of Cambridge.

While MIT has previously considered other functions for the landmark building, using it as an interdisciplinary academic center — while expanding the capacities of SA+P’s highly rated programs — could bring about a wide array of benefits for students, faculty, and the larger community.

Hashim Sarkis, dean of the School of Architecture and Planning, emphasizes that students, staff, and faculty throughout the Institute would find an intellectual home in the proposed new building.

“It’s about really creating a design hub for MIT on the campus, bringing the expanding and increasingly important areas of design from across MIT — art, architecture, and urban planning — together in one place,” says Sarkis. “Moving does not address just the school’s aspirations, but MIT’s aspirations.”

MIT leaders have voiced their support for the plan, while also noting its benefits for the Institute as a whole.

"SA+P already has a wonderful spirit and sense of identity; uniting so many elements of the School in a single building will amplify that strength and create a central resource for the whole MIT community," says MIT President L. Rafael Reif. "In its outward effects, the project is also a perfect fit for the people of SA+P: Who better to revive a grand old building and reknit the streetscape along Mass. Ave. than those who love and understand buildings and cities the most?"

Robert B. Millard, chairman of the Corporation at MIT, also expressed his support for the project.

“I have a long history with and an admiration for the School of Architecture and Planning, and I am delighted that as we celebrate the 150th anniversary of the Department of Architecture, we plan for a future that strengthens both SA+P and MIT,” Millard says.

Among other things, a relocation to the Metropolitan Storage Warehouse could expand MIT’s classroom and design studio space, significantly increase its exhibition capacity for arts and design programming, provide new faculty offices, create a new center for the arts at MIT, and provide new areas for meetings and collaboration-based work. The building would also host public events and activities about cities, and include retail spaces.

“The renovation of the Metropolitan Storage Warehouse is intended to generate new opportunities for research, teaching, and innovation at the Institute,” says Provost Martin A. Schmidt. “I look forward to seeing faculty and students, across many disciplines, use the new space to push their fields into the future.”

A featured part of the renovated building would be a new makerspace headed by Martin Culpepper, a professor in MIT’s Department of Mechanical Engineering and leader of the Institute’s Precision Compliant Systems Laboratory. That space would provide expanded design and fabrication facilities for the MIT community, and let Institute researchers collaborate — physically or virtually — with the MIT Hong Kong Innovation Node, which opened in 2017.

In recent years, SA+P has become increasingly involved in collaborations with other schools at MIT. These substantive new areas of collaboration range widely, including the increased incorporation of design principles in engineering — as well as the greater use of data in urban studies, and new connections between architecture, planning, climate science, and engineering. SA+P could host studio-based courses developed with other schools (including the School of Engineering and the MIT Sloan School of Management) in the renovated space. MIT also approved a new urban science major for undergraduates in 2018, and a design minor, approved in 2016, to fit any existing major.

The possible move would also shift a major space for teaching and research over to the west side of Massachusetts Avenue for the first time, bringing the school into closer proximity with the residential population of the Institute campus.

“We [would be] creating a new gateway for MIT,” says Sarkis, noting that the building has a central location in the overall map of the campus.

The proposal to renovate the historic building includes retail space on the ground floor, and a theater. One of the proposed retail spaces would be a new outlet for the MIT Press, likely focusing on the topics of art, architecture, urbanism, and design.

The possible move would also take advantage of a distinctive situation in which there is room for academic expansion within the existing built environment at MIT.

Construction on the Metropolitan Storage Warehouse began in 1894, although some parts of the current structure date to 1911. The building was designed by the architectural firm Peabody and Stearns, and its brick tower and narrow windows have long drawn comparisons to a castle.

The structure, which MIT owns, is one of the oldest buildings in the campus area — MIT did not move to Cambridge until 1916 — and it is listed on the National Register of Historic Places. The City of Cambridge must approve modifications to the structure due to its historic status. MIT has been in discussion with Cambridge officials about the project.

As one of MIT’s five schools, SA+P encompasses a variety of departments and programs, including the Department of Architecture, the Department of Urban Studies and Planning, the MIT Media Lab, the Center for Real Estate, the Program in Art, Culture, and Technology, and the MIT Norman B. Leventhal Center for Advanced Urbanism.

MIT Media Lab personnel would remain in their current locations. The Media Lab is housed in a two-building complex, and its newest building, on the corner of Ames Street and Amherst Street, just opened in 2010. The project could allow SA+P to create shared resources with the Media Lab, including gallery and performance spaces, and project rooms, while providing a new public portal to the Media Lab.

The proposed redevelopment of the structure would follow other MIT building projects that have been designed for interdisciplinary collaboration while containing flexible spaces. This includes the Stata Center, which houses an array of researchers in disciplines from computer science to linguistics, and the new MIT.nano building, slated for completion this year, which will host a wide range of nanotechnology research.

“Everybody’s looking at it as an opportunity,” Sarkis says. “We can think about how we can do things better together, how we can create new opportunities for teaching and research, and technology and resources and workspaces — together we can re-imagine everything. We’re really looking forward to that.”