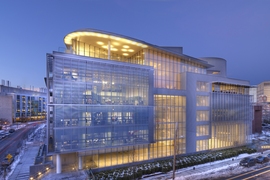 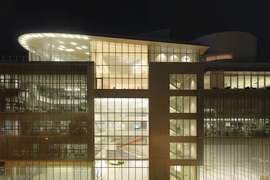 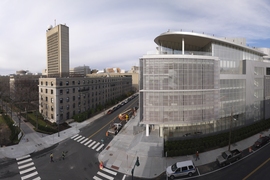 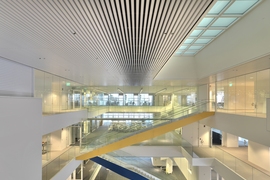 Caption:
The new Media Lab complex at night.
Credits:
Photo: Andy Ryan
On Friday, March 5, MIT officially opens the Media Lab Complex, designed by Pritzker Prize-winning architect Fumihiko Maki and Associates in association with Leers Weinzapfel Associates. The building marks a new era of innovation for the world-renowned Media Lab and for a range of art, design, and technology-related programs in the School of Architecture + Planning, of which the Media Lab is a part.

Located on the corner of Amherst and Ames Streets in the heart of the MIT campus, the six-story, 163,000-square-foot building is adjacent to and carefully integrated into the existing home of the Media Lab, known as the Wiesner Building, designed by MIT alumnus I.M. Pei. Together, the two landmark buildings — connected on several floors — will create an exceptional environment for research, creativity, and discovery.

"In the best MIT tradition of inventing the future, the new Media Lab Complex expands a legendary workshop where creativity and innovation continually transform the intersection of people and machines," said MIT President Susan Hockfield. "This magnificent new facility unites researchers from across our campus in advancing technologies that amplify the human experience."

The new six-story complex features an open, flexible, atelier-style layout designed to support the unique cross-disciplinary research style of the Media Lab and other academic units that will occupy the building. Laboratories and workspaces are arranged around light-filled central atria, with spectacular views of the Charles River and the Boston skyline to the south. Lecture halls and other public gathering spaces occupy the upper floors and serve to draw visitors up through the building.

“The magic of the Media Lab is its ability to bring together researchers from an eclectic range of disciplines — engineers, computer scientists, artists, musicians, and others — who work together collaboratively to invent technologies that improve people's lives and transform society,” says Frank Moss, Director of the Media Lab. “The openness and transparency of this incredible new building will support the Lab’s unique style of research and allow us to take on the major challenges that confront the world in the 21st century, such as human health, education and sustainable cities."

The building’s several double-height, glass-enclosed research laboratories — home to research groups such as Camera Culture, Lifelong Kindergarten and Tangible Media — are vertically offset from one another. This makes possible long and often surprising vistas through the building —horizontally, vertically, and diagonally — that will serve to make the research work highly visible. It will also enhance the sense of community in the building.  The aluminum and glass curtain walls that surround the steel-framed building extend the feeling of openness and transparency to the exterior and make the building appear like a luminous jewel at night.

“Fumihiko Maki is one of the world’s most elegant designers,” says Adèle Naudé Santos, dean of the MIT School of Architecture + Planning. “The precision of his vision and his exacting attention to detail lend his work a rare clarity and serenity. This exquisite building is one of his best, and we are privileged to have it on our campus.”

Now celebrating its 25th anniversary, the MIT Media Lab has long been at the vanguard of new technology. Many of the Lab’s inventions — such as electronic ink, wearable computers, and early platforms for social networking — helped ignite the digital revolution. More recently, the Lab has expanded its focus into “human adaptability,” with research projects involving affective computing, 6-D imaging and the future of the automobile.

The Media Lab Complex will also become home to the Jerome Lemelson Center for Inventive Thinking and to the Okawa Center for Future Children, funded by Isao Okawa, the late chairman of CSK Corporation and SEGA Enterprises, Ltd. The center will focus on transforming the ways in which children live, learn and play in the digital age.

The complex will also house several programs in the School of Architecture + Planning, including the newly formed Art, Culture and Technology Program.

The Media Lab Complex builds on an MIT tradition of architectural excellence, from the neoclassical design of its original architect, William Welles Bosworth, to the mid-20th-century modernism of Alvar Aalto and Eero Saarinen. An ambitious new building program, begun a decade ago, added nearly one million square feet to the Cambridge campus and utilized the talents of some of the world’s finest architects and planners, including Charles Correa, Frank Gehry, Steven Holl and Kevin Roche. Other buildings currently under construction include the Koch Institute for Integrative Cancer Research at MIT, designed by Ellenzweig; and a new building for the Sloan School of Management, designed by Moore Ruble Yudell Architects & Planners in association with Bruner / Cott Architects.