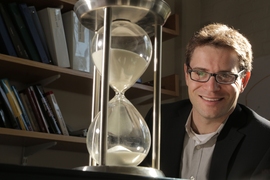 Is sand a solid, a liquid, or a gas? It’s a question that has plagued scientist for centuries. If a jogger runs on a beach, sand acts as a solid and supports their weight. Put it in an hourglass, and sand pours through the nozzle, much like a liquid. If a child in a sandbox trips and kicks up a cloud of sand, the separated grains collide and interact as though it’s a gas.

So what state of matter is sand? “In my opinion, the answer is all of the above,” answers Ken Kamrin, an associate professor of mechanical engineering who received tenure earlier this month. “I think if we want to develop a better understanding of granular media, we have to think about it as broadly as possible and come up with models that treat it like a solid, liquid, or gas.”

Granular materials are ubiquitous. They make up the soil, sand, and gravel we live on, the grains and flour we use in cooking, and the powders we use for medicine. They’re second only to water as the most-handled material in industry. However, little is known about how they move, flow, and interact with their environment.

At the onset of his career, Kamrin saw immense opportunity in studying granular media. “Granular material science is one of the few subjects where you can make a fundamental contribution that has an immediate impact on many different applications,” he explains.

As a student studying engineering physics and applied mathematics, Kamrin developed an interest in continuum mechanics, which offered governing equations for how materials behave in macroscale settings. When Kamrin learned that there was no such set of equations that quantitatively predict sand flow, he was astounded. “That became a motivation,” he recalls. “I became enamored with this idea that maybe we could come up with the answer.”

Granular materials are complicated for a number of reasons. In addition to existing in all three phases of matter, they consist of relatively large particles that behave differently from atoms. This presents a problem not present when predicting gas or fluid movement on the human size scale. The materials are also influenced by pressure — if you squeeze a handful of sand, it will behave very differently than if you just hold it lightly. What’s more, two cups of sand that look alike could behave differently depending on how they were prepared.

While much research had been done on how granular materials flow in simple shear — a parallel plane where the material moves in one direction — extending this understanding to general cases, such as swirling motion or flow out of silos, was surprisingly difficult.

For Kamrin, inspiration came in an unlikely place: a research study about emulsion flow in mayonnaise. “I looked at the model they put forward for emulsion flow and a light bulb went off,” Kamrin says. “I thought I could put together a granular material model that substituted sand for mayonnaise.”

After adapting the equation using data from granular materials, Kamrin’s results were so close that he thought he had made a mistake. “I almost thought I had plotted the experimental data twice. I just couldn’t believe it. I jumped out of my seat, turned to my wife and said, ‘I think I may have found the biggest result of my life thus far,’” Kamrin recalls.

Kamrin’s model can now predict how enigmatic granular materials move and behave in diverse settings. It can even predict when some particles are traveling quickly while adjacent to particles going 10,000 times slower. The model has also been shown to predict other strange phenomena related to the finite size of grains, such as the observed size-dependence of flow thresholds, where thinner layers act as if they are stronger, and regions close to flowing zones act as if they are weaker.

“There are so many places we see this material, and now we have this tool where we can quantitatively predict what it does,” Kamrin explains.

Kamrin and his team have developed custom software that runs the model for any situation. This model could have far-reaching impacts. It may help predict geohazards such as landslides, and optimize the design of industrial hoppers or control flows through chutes.

“If you can just imagine doing something to a granular material, we can now run the model and make a strong prediction,” Kamrin adds.

Recently Kamrin has found the model simplifies in cases of “granular intrusion,” which is key to understanding impacts, burrowing, and locomotion in grains. This research has led to a new family of scaling laws that can predict large-scale driving on sandy terrains based on small-scale tests. This approach could help the automotive industry develop wheels and treads to more efficiently drive off-road on dirt, sand, and gravel. It may even help NASA improve the design of Mars rovers.