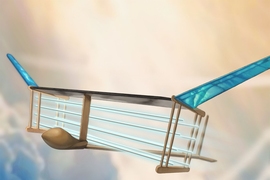 ↓ Download Image
Caption: A new MIT plane is propelled via ionic wind. Batteries in the fuselage (tan compartment in front of plane) supply voltage to electrodes (blue/white horizontal lines) strung along the length of the plane, generating a wind of ions that propels the plane forward.
Credits: Image: Christine Y. He 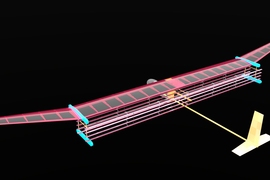 ↓ Download Image
Caption: A general blueprint for an MIT plane propelled by ionic wind. The system may be used to propel small drones and even lightweight aircraft, as an alternative to fossil fuel propulsion.
Credits: Image: MIT Electric Aircraft Initiative

Caption:
A new MIT plane is propelled via ionic wind. Batteries in the fuselage (tan compartment in front of plane) supply voltage to electrodes (blue/white horizontal lines) strung along the length of the plane, generating a wind of ions that propels the plane forward.
Credits:
Image: Christine Y. He

Caption:
A general blueprint for an MIT plane propelled by ionic wind. The system may be used to propel small drones and even lightweight aircraft, as an alternative to fossil fuel propulsion.
Credits:
Image: MIT Electric Aircraft Initiative

Since the first airplane took flight over 100 years ago, virtually every aircraft in the sky has flown with the help of moving parts such as propellers, turbine blades, or fans that produce a persistent, whining buzz.

Now MIT engineers have built and flown the first-ever plane with no moving parts. Instead of propellers or turbines, the light aircraft is powered by an “ionic wind” — a silent but mighty flow of ions that is produced aboard the plane, and that generates enough thrust to propel the plane over a sustained, steady flight.

Unlike turbine-powered planes, the aircraft does not depend on fossil fuels to fly. And unlike propeller-driven drones, the new design is completely silent.

“This is the first-ever sustained flight of a plane with no moving parts in the propulsion system,” says Steven Barrett, associate professor of aeronautics and astronautics at MIT. “This has potentially opened new and unexplored possibilities for aircraft which are quieter, mechanically simpler, and do not emit combustion emissions.”

He expects that in the near-term, such ion wind propulsion systems could be used to fly less noisy drones. Further out, he envisions ion propulsion paired with more conventional combustion systems to create more fuel-efficient, hybrid passenger planes and other large aircraft.

Barrett and his team at MIT have published their results today in the journal Nature.

Barrett says the inspiration for the team’s ion plane comes partly from the movie and television series, “Star Trek,” which he watched avidly as a kid. He was particularly drawn to the futuristic shuttlecrafts that effortlessly skimmed through the air, with seemingly no moving parts and hardly any noise or exhaust.

“This made me think, in the long-term future, planes shouldn’t have propellers and turbines,” Barrett says. “They should be more like the shuttles in ‘Star Trek,’ that have just a blue glow and silently glide.”

About nine years ago, Barrett started looking for ways to design a propulsion system for planes with no moving parts. He eventually came upon “ionic wind,” also known as electroaerodynamic thrust — a physical principle that was first identified in the 1920s and describes a wind, or thrust, that can be produced when a current is passed between a thin and a thick electrode. If enough voltage is applied, the air in between the electrodes can produce enough thrust to propel a small aircraft.

For years, electroaerodynamic thrust has mostly been a hobbyist’s project, and designs have for the most part been limited to small, desktop “lifters” tethered to large voltage supplies that create just enough wind for a small craft to hover briefly in the air. It was largely assumed that it would be impossible to produce enough ionic wind to propel a larger aircraft over a sustained flight.

“It was a sleepless night in a hotel when I was jet-lagged, and I was thinking about this and started searching for ways it could be done,” he recalls. “I did some back-of-the-envelope calculations and found that, yes, it might become a viable propulsion system,” Barrett says. “And it turned out it needed many years of work to get from that to a first test flight.” 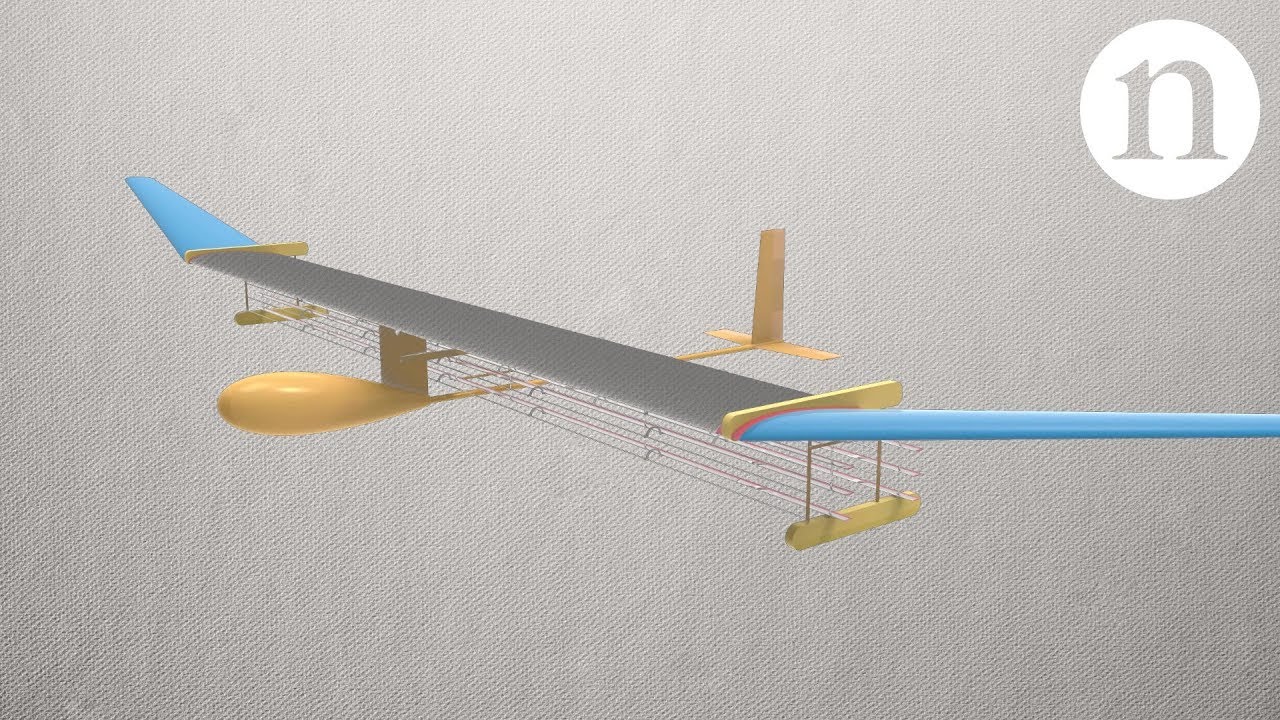 The team’s final design resembles a large, lightweight glider. The aircraft, which weighs about 5 pounds and has a 5-meter wingspan, carries an array of thin wires, which are strung like horizontal fencing along and beneath the front end of the plane’s wing. The wires act as positively charged electrodes, while similarly arranged thicker wires, running along the back end of the plane’s wing, serve as negative electrodes.

The fuselage of the plane holds a stack of lithium-polymer batteries. Barrett's ion plane team included members of Professor David Perreault’s Power Electronics Research Group in the Research Laboratory of Electronics, who designed a power supply that would convert the batteries’ output to a sufficiently high voltage to propel the plane. In this way, the batteries supply electricity at 40,000 volts to positively charge the wires via a lightweight power converter.

As the newly formed cloud of ions flows toward the negatively charged wires, each ion collides millions of times with other air molecules, creating a thrust that propels the aircraft forward.

The team, which also included Lincoln Laboratory staff Thomas Sebastian and Mark Woolston, flew the plane in multiple test flights across the gymnasium in MIT’s duPont Athletic Center — the largest indoor space they could find to perform their experiments. The team flew the plane a distance of 60 meters (the maximum distance within the gym) and found the plane produced enough ionic thrust to sustain flight the entire time. They repeated the flight 10 times, with similar performance.

“This was the simplest possible plane we could design that could prove the concept that an ion plane could fly,” Barrett says. “It’s still some way away from an aircraft that could perform a useful mission. It needs to be more efficient, fly for longer, and fly outside.”

The new design is a “big step” toward demonstrating the feasibility of ion wind propulsion, according to Franck Plouraboue, senior researcher at the Institute of Fluid Mechanics in Toulouse, France, who notes that researchers previously weren’t able to fly anything heavier than a few grams.

“The strength of the results are a direct proof that steady flight of a drone with ionic wind is sustainable,” says Plouraboue, who was not involved in the research. “[Outside of drone applications], it is difficult to infer how much it could influence aircraft  propulsion  in the future. Nevertheless, this is not really a weakness but rather an opening for future progress, in a field which is now going to burst.”

Barrett’s team is working on increasing the efficiency of their design, to produce more ionic wind with less voltage. The researchers are also hoping to increase the design’s thrust density — the amount of thrust generated per unit area. Currently, flying the team’s lightweight plane requires a large area of electrodes, which essentially makes up the plane’s propulsion system. Ideally, Barrett would like to design an aircraft with no visible propulsion system or separate controls surfaces such as rudders and elevators.

“It took a long time to get here,” Barrett says. “Going from the basic principle to something that actually flies was a long journey of characterizing the physics, then coming up with the design and making it work. Now the possibilities for this kind of propulsion system are viable.”

This research was supported, in part, by MIT Lincoln Laboratory Autonomous Systems Line, the Professor Amar G. Bose Research Grant, and the Singapore-MIT Alliance for Research and Technology (SMART). The work was also funded through the Charles Stark Draper and Leonardo career development chairs at MIT.

Prof. Steven Barrett speaks with Forbes reporter Jeremy Bogaisky about the new plane he developed that is propelled by an ion drive, noting that he is working to embed a prolusion system within the skin of the aircraft. “There’s no reason to think long-term that airplane designs with electroaerodynamic propulsion need look at all like an airplane today,” explains Barrett.

The Economist highlights how MIT researchers have developed the first plane that is powered by an ion drive and has no moving parts. “The use of an ion drive means the MIT craft contains no moving propulsion parts in the form of propellers or jet engines,” The Economist explains. “It can fly silently and without direct emissions from burning fossil fuels.”

CNN reporter Helen Regan highlights a new solid-state plane developed by MIT researchers that has no moving parts and does not require fossil fuels. “The flight is a milestone in ‘ionic wind’ technology,” explains Regan, “and could pave the way for quieter and environmentally cleaner aircraft in the future.”

Inspired by “Star Trek,” Prof. Steven Barrett has developed a new silent airplane that does not require fossil fuels to operate and is powered by ionic wind thrusters, reports Malcom Ritter for the AP. Ritter explains that the technology that powers the plane could eventually be used “in airplane-like drones that perform tasks like environmental monitoring and surveillance.”

Scientific American reporter Angus Chen writes about how Prof. Steven Barrett has created the first-ever airplane that is powered by ionic wind thrusters and has no moving parts. “[Barrett] has demonstrated something truly unique,” says Prof. Mitchell Walker of the Georgia Institute of Technology.

A Nature editorial highlights the historic breakthrough achieved by MIT researchers who developed the first plane that is propelled by ionic wind and has no moving parts. Nature writes that the plane is a “remarkable machine,” adding that “anyone who watches the machine fly can surely see glimpses of a future with cleaner and quieter aircraft.”

In an article for The Conversation, Prof. Steven Barrett details how he was inspired by science fiction movies to create an airplane that makes no noise, has no moving parts and does not require fossil fuels to operate. Barrett explains that he hopes the new technology “could be used in larger aircraft to reduce noise and even allow an aircraft’s exterior skin to help produce thrust.”

Writing for Popular Science, Rob Verger highlights how MIT researchers have built and flown “a radically different type of plane that is thrust through the air using just electricity and the movement of ions, a type of silent drive without moving parts out of science fiction.”

MIT researchers have built a new electric plane that has no moving parts and is propelled by “ionic wind,” reports Joel Achenbach for The Washington Post. Franck Plouraboué of Toulouse University, explains that the new plane creates “an opening for future progress, in a field which is now going to burst.”

Reuters reporter Will Dunham writes that a new plane without moving parts developed by MIT researchers is a “radical new approach toward flying.” The plane could one day lead to “ultra-efficient and nearly silent airplanes that have no moving control surfaces like rudders or elevators, no moving propulsion system like propellers or turbines, and no direct combustion emissions like you get with burning jet fuel,” explains Prof. Steven Barrett.