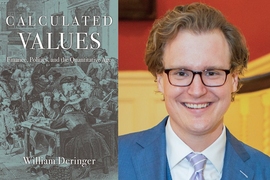 ↓ Download Image
Caption: William Deringer of STS has his first book coming out in February about how quantitative economic arguments gained hold in the modern world.

Caption:
William Deringer of STS has his first book coming out in February about how quantitative economic arguments gained hold in the modern world.

Odds are, you’ve tried to win arguments by citing statistics. Who has been the greater player, LeBron James or Michael Jordan? Which health care policy is right? Where are the best schools? Which city has the worst morning traffic? If you can find the numbers, then maybe — maybe — you can resolve these matters.

But have you ever wondered: When did people start using numbers in politics or other public debates, anyway? Did the Egyptians have quantitative arguments about pyramid policy? Or is it a very recent phenomenon, due to the spread of data and electronic communications?

In a new book, William Deringer, an assistant professor at MIT, offers an answer: In the English-speaking world, people started using numbers in political debates in Britain around 1688, and the practice took firm hold over the next few decades.

Why then? England had just concluded its “Glorious Revolution,” in which William and Mary usurped the throne, deposing James II, while Parliament gained a stronger hold on state affairs. That rise of parliamentary power, along with polarized political parties and the growth of the press, contributed to a public culture of debate and dispute — one in which numbers increasingly became a form of ammunition.

“It was part of a larger phenomenon,” says Deringer, who is the Leo Marx Career Development Assistant Professor of Science, Technology, and Society. “Issue after issue, you had two sides arguing intensely. This turned out to be a political context in which numbers functioned really well.”

Moreover, by 1720, when the infamous episode of global financial speculation known as the South Sea Bubble reached a crisis point, quantitative arguments became even more embedded in civic life, given the junction of politics and economics. Really, the advent of numerical arguments in politics dates to the whole period from 1688 to at least 1720, and even a bit beyond that.

As Deringer suggests in the book, the influence of this change has been immense. The practices of British political culture thoroughly informed American colonial politics and in a sense created the means for quantitative reasoning to gain authority in the modern U.S. state.

“The developments of the 17th and 18th centuries created cultural conditions that continue to influence us today,” Deringer says.

Deringer’s book, “Calculated Values: Finance, Politics, and the Quantitative Age,” is being published this week by Harvard University Press.

To be clear, Deringer’s historical claim is not that numbers or mathematics were wholly ignored in civic life before the late 17th century. From the ancient Greeks who discoursed upon the moral value of mathematics, to late-Medieval Venetians who used double-entry bookkeeping to change commerce, mathematics mattered in many ways. The English themselves compiled the famous Domesday Book around 1086 to keep track of land and income.

What Deringer is tracing, however, is a new era in which “fighting with numbers,” as he writes in the book, became “a regular part” of politics. In the modern world, we look to statistics to help resolve public issues and give quantitative evidence considerable weight.

This new practice in politics, Deringer believes, stems crucially from the expansion of parliamentary powers in Britain, in the years after 1688. Those powers, in a series of parliamentary acts, limited the monarch’s ability to control courts and elections, ensured the right of free speech in Parliament, and, significantly, included the “financial settlement” in which the monarch had to keep reapplying to Parliament for state funds.

In a short time, then, Parliament became increasingly active in controlling Britain’s purse strings, and it tolerated increasingly vocal debate on the subject — conditions in which statistics gained authority.

“People were using calculations as a way of making criticism,” Deringer says. The polarized politics, with Tories and Whigs at odds, and the growing press meant that this was “an environment remarkably hospitable to numerical calculation as a mode of thinking and arguing.”

Indeed, a fair amount of our language for such things dates to this time period; the phrase “facts and figures” is first found in 1727, for instance.

Critics with a cause — and calculations

Deringer’s findings also cut against the grain of theoretical work that regards the state as an overwhelming source of repressive power. In contrast to this notion, the emergence of statistics in British politics did not help the state subjugate anyone. It helped both sides in politics make claims, and actually helped outsiders and antiestablishment critics gain credibility for their assertions.

“One of the things I found fascinating about this period is that [state power] could not have been the only explanation” for the advent of statistics in politics, Deringer says. “The state was not as functional as it could have been. The state didn’t know what the public thought it should know.”

That applies to the debates about the South Sea Bubble as well, he observes. In the book, Deringer chronicles the public saga of one Archibald Hutcheson, a critic of the South Sea Company, who felt its stock was overinflated and engaged in quantitative financial detective work to prove his point.

“The people who were doing the most intensive calculations about the bubble were consistently people who were critical of this scheme,” Deringer says. The collapse of the South Sea Bubble, he writes, “was probably the greatest political triumph for calculation in the entire 18th century.”

Of course, simply wielding numbers is no guarantee of winning a political debate, something apparent in contemporary times as well. Sometimes entrenched interests override solid numerical reasoning; many other times, statistics depend on debatable assumptions or yield results open to multiple interpretations.

In many cases, Deringer says, “Calculations can be really flexible. There’s a lot of give in some numbers. If you change a couple of assumptions, there will be a very different conclusion.”

The use of numbers in politics, he thinks, also creates a heightened skepticism of quantitative claims — which can be a good thing if it creates more critical thinking and sharpens our analysis of complicated issues. Having numbers on hand can be good; asking questions about them can be better. And that has remained constant, from 1688 through the present day.

“I think these things go together in a two-sided relationship,” Deringer says. “There is something healthy about that.”

How Haiti helps us think differently about history