A manifesto for designing cities 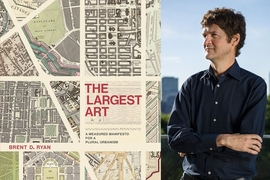 ↓ Download Image
Caption: Brent D. Ryan, an associate professor of urban design and public policy in MIT’s Department of Urban Studies and Planning, has detailed his perspective on urban design in a new book, “The Largest Art: A Measured Manifesto for a Plural Urbanism,” recently published by the MIT Press.

Caption:
Brent D. Ryan, an associate professor of urban design and public policy in MIT’s Department of Urban Studies and Planning, has detailed his perspective on urban design in a new book, “The Largest Art: A Measured Manifesto for a Plural Urbanism,” recently published by the MIT Press.

“The city is a people’s art, a shared experience,” a Philadelphia architect and planner named Edmund Bacon once wrote, adding that any urban designer’s job was to “conceive an idea, implant it, and nurture its growth in the collective minds of the community.”

It sounds like a common-sense approach to city building — and one that could lead to a pleasing urban mosaic, as both community needs and architectural styles change over time. But according to MIT professor Brent D. Ryan, this approach to designing cities that are of the people and for the people has been absent from most urban design work.

Instead, Ryan thinks, today’s cities have been saddled with grandiose urban projects that, although they may have flashy veneers and stylistic coherence, lack sensitivity to the diverse needs of city life and the long timeframes over which urban development is evaluated. The result is that designers, developers, and city officials continue to think of urban design as little more than massive building projects that more closely resemble art for art’s sake than design for people’s sake.

“We need to adapt urban design to the kinds of cities and societies that we have,” Ryan says. “Perfection is not really achievable.”

Ryan, an associate professor of urban design and public policy in MIT’s Department of Urban Studies and Planning, has detailed this perspective in a new book, “The Largest Art: A Measured Manifesto for a Plural Urbanism,” recently published by the MIT Press. The book is a call for a pragmatic and democratic approach to urban design, one that often acknowledges community input and recognizes the many kinds of “pluralism” in urban life: the numerous interests and built elements that exist, in multiple layers, as cities get built up over time.

“The world is becoming more plural, in many ways,” Ryan says. “Cities are becoming more plural as they grow in scale. And a lot of the dialogue in urban design shows we’ve been running out of gas, in terms of previous ideologies about how to design the city.”

From Louis XIV to Le Corbusier?

As Ryan details it in the book, much of today’s urban design work may be modern in style, but it is actually rooted more deeply in the past: the 18th century, to be precise.

“Urban design has at its heart a kind of hegemonic approach toward space that’s derived from its origins in 18th-century French urbanism,” Ryan says. Louis XIV of France could have Versailles built by fiat, Ryan notes, and Peter the Great soon imitated him with the construction of St. Petersburg; such massive, “unitary” projects became a paradigm for later generations of urban designers.

“These kinds of stand-alone, new-city, single-actor, great-power models of urban design were translated literally into things like [Daniel] Burnham and [Edward] Bennett’s plan for Chicago, and into projects like 20th-century city visions,” Ryan says.

The Chicago plan reshaped large parts of the city in the early 20th century, while Swiss designer Le Corbusier later influenced both architects and academia. But the outcomes that resulted — seemingly endless regular street grids, freeway-based cityscapes, and homogenous urban megaprojects — have been controversial precisely because of the impositions they place on a communal urban experience.

“There’s a pretty unbroken historical trajectory of thinking about urban design that I think has very little connection to the cities and world that we live in today,” Ryan says. “Our task for the future is to see how much we can move away from that hegemonic orgin of the field, which I think is increasingly obsolete.”

Ryan provides a variety of examples of urbanists and artists who have contributed to a more pragmatic, pluralistic, democratic vision of city design, including Philadelphia’s Bacon; former MIT professor Kevin Lynch, whose work made the case for an aesthetic with many sources, rather than a single stylistic mode; and David Crane, a postwar urbanist who characterized urban design as being more like “composing a painting on a flowing river” than imposing a unified vision on a whole city.

Ryan also analyzes examples of real-world urban design interventions that he thinks exhibit pluralism in action, from the sculptures of Constantin Brancusi to a social housing complex in the Bronx, New York, and the evolution of Ljubljana, Slovenia.

“I want an urban design philosophy that is appropriate to the cities and societies that we want to have,” Ryan says.

For all his emphasis on practical pluralism, Ryan very much regards urban design as an art form to be savored — which is partly why he wants to encourage its conceptual reimagination through pluralism.

“It’s the largest of the arts, in a very real way,” Ryan says. “The London Green Belt [the ring of open land around the metropolis] can be regarded as a work of art at the scale of a metropolitan area. We don’t have any art that is larger than that.”

Ryan’s argument that urban designers should be sensitive to their urban contexts is also informed by his previous work on cities, including his 2012 book, “Design After Decline.” In that volume, Ryan looked at the postindustrial landscapes of U.S. cities and explored the ways planners could help rebuild those areas.

In such circumstances, helping cities evolve is as much of a pressing challenge as helping them expand.

“Cities are becoming larger and more complex, and at the same time, we’re more and more shifting away from building in empty places to building in places already inhabited to some degree,” Ryan says. “We’re more and more rebuilding the cities we have, as opposed to building new cities at the frontier … and when you’re rebuilding a city, your concerns are entirely different. You’re dealing with multiple property holders, the existing urban fabric, the presence of multiple eras of construction, and all the people who live in those places.”

So while his new book is intended as a “shot across the bow” of academic urban design theory, Ryan says he hopes people will recognize that, if anything, a broader view of the designer’s role can expand opportunities for the profession.

A design to save American cities