How to bend and stretch a diamond 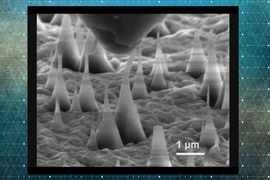 ↓ Download Image
Caption: This scanning electron microscope image shows ultrafine diamond needles (cone shapes rising from bottom) being pushed on by a diamond tip (dark shape at top). These images reveal that the diamond needles can bend as much as 9 percent and still return to their original shape.
Credits: Courtesy of the researchers

Caption:
This scanning electron microscope image shows ultrafine diamond needles (cone shapes rising from bottom) being pushed on by a diamond tip (dark shape at top). These images reveal that the diamond needles can bend as much as 9 percent and still return to their original shape.
Credits:
Courtesy of the researchers

Diamond is well-known as the strongest of all natural materials, and with that strength comes another tightly linked property: brittleness. But now, an international team of researchers from MIT, Hong Kong, Singapore, and Korea has found that when grown in extremely tiny, needle-like shapes, diamond can bend and stretch, much like rubber, and snap back to its original shape.

The surprising finding is being reported this week in the journal Science, in a paper by senior author Ming Dao, a principal research scientist in MIT’s Department of Materials Science and Engineering; MIT postdoc Daniel Bernoulli; senior author Subra Suresh, former MIT dean of engineering and now president of Singapore’s Nanyang Technological University; graduate students Amit Banerjee and Hongti Zhang at City University of Hong Kong; and seven others from CUHK and institutions in Ulsan, South Korea.

Experiment (left) and simulation (right) of a diamond nanoneedle being bent by the side surface of a diamond tip, showing ultralarge and reversible elastic deformation.

The results, the researchers say, could open the door to a variety of diamond-based devices for applications such as sensing, data storage, actuation, biocompatible in vivo imaging, optoelectronics, and drug delivery. For example, diamond has been explored as a possible biocompatible carrier for delivering drugs into cancer cells.

The team showed that the narrow diamond needles, similar in shape to the rubber tips on the end of some toothbrushes but just a few hundred nanometers (billionths of a meter) across, could flex and stretch by as much as 9 percent without breaking, then return to their original configuration, Dao says.

Ordinary diamond in bulk form, Bernoulli says, has a limit of well below 1 percent stretch. “It was very surprising to see the amount of elastic deformation the nanoscale diamond could sustain,” he says.

“We developed a unique nanomechanical approach to precisely control and quantify the ultralarge elastic strain distributed in the nanodiamond samples,” says Yang Lu, senior co-author and associate professor of mechanical and biomedical engineering at CUHK. Putting crystalline materials such as diamond under ultralarge elastic strains, as happens when these pieces flex, can change their mechanical properties as well as thermal, optical, magnetic, electrical, electronic, and chemical reaction properties in significant ways, and could be used to design materials for specific applications through “elastic strain engineering,” the team says.

Experiment (left) and simulation (right) of a diamond nanoneedle being bent to fracture by the side surface of a diamond tip, showing ultralarge elastic deformation (around 9 percent maximum tensile strain).

The team measured the bending of the diamond needles, which were grown through a chemical vapor deposition process and then etched to their final shape, by observing them in a scanning electron microscope while pressing down on the needles with a standard nanoindenter diamond tip (essentially the corner of a cube). Following the experimental tests using this system, the team did many detailed simulations to interpret the results and was able to determine precisely how much stress and strain the diamond needles could accommodate without breaking.

The researchers also developed a computer model of the nonlinear elastic deformation for the actual geometry of the diamond needle, and found that the maximum tensile strain of the nanoscale diamond was as high as 9 percent. The computer model also predicted that the corresponding maximum local stress was close to the known ideal tensile strength of diamond — i.e. the theoretical limit achievable by defect-free diamond.

Yonggang Huang, a professor of civil and environmental engineering and mechanical engineering at Northwestern University, who was not involved in this research, agrees with the researchers’ assessment of the potential impact of this work. “The surprise finding of ultralarge elastic deformation in a hard and brittle material — diamond — opens up unprecedented possibilities for tuning its optical, optomechanical, magnetic, phononic, and catalytic properties through elastic strain engineering,” he says.

The team also included Muk-Fung Yuen, Jiabin Liu, Jian Lu, Wenjun Zhang, and Yang Lu at the City University of Hong Kong; and Jichen Dong and Feng Ding at the Institute for Basic Science, in South Korea. The work was funded by the Research Grants Council of the Hong Kong Special Administrative Region, Singapore-MIT Alliance for Research and Technology (SMART), Nanyang Technological University Singapore, and the National Natural Science Foundation of China.

A team led by research scientist Ming Dao has made diamond nano-needles that can bend without breaking and snap back into to their original position, New Scientist reports. “The tiny needles had very little room for defects in their crystal structure, so they could bend without snapping,” the article explains.

Forbes contributor Brid-Aine Parnell describes new research from MIT and others who discovered that even though diamonds are hard and brittle, “needle nanodiamonds can stretch by as much as 9%.” Because of this, such nanodiamonds could “be biocompatible for vivo imaging, optoelectronics or even delivering drugs into cancer cells,” writes Parnell.

A paper from MIT and others shows that when diamonds are in the form of a nano-needle, they can be bent and stretched before returning to their original shape, reports Aristos Georgiou for Newsweek. The researchers “found that they could bend and stretch by as much as 9 percent without breaking, which is approaching the theoretical limit of diamond flexibility,” notes Georgiou.

Ryan Mandelbaum of Gizmodo writes that MIT scientists have found that diamonds can bend without snapping when in the form of nano-needles. These needles can potentially be used to “store data or to deliver drugs directly into cells, or simply as ultra-strong nanostructures,” explains Mandelbaum.