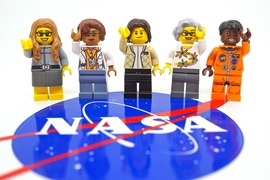 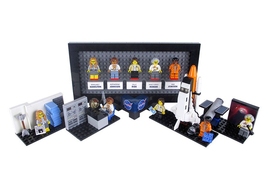 ↓ Download Image
Caption: Maia Weinstock's full proposed Women of NASA set includes vignettes for each of the five featured astronauts, scientists, and engineers. A LEGO team is now working on a design for the final production set, to be released in late 2017 or early 2018.
Credits: Photo: Maia Weinstock

Caption:
Maia Weinstock's full proposed "Women of NASA" set includes vignettes for each of the five featured astronauts, scientists, and engineers. A LEGO team is now working on a design for the final production set, to be released in late 2017 or early 2018.
Credits:
Photo: Maia Weinstock

For years, Maia Weinstock, the deputy editor of MIT News, has been creating miniature LEGO figurines to honor and promote such scientists and engineers as MIT Institute Professor Emerita Mildred Dresselhaus, Vice President for Research Maria T. Zuber, and Department of Chemical Engineering head Paula Hammond, the David H. Koch Chair Professor in Engineering. The figures are Weinstock’s playful way of boosting the visibility of scientists, in particular the work of female scientists.

Now, a set of LEGOs Weinstock created celebrating the history of women at NASA is about to blast off. On Tuesday, LEGO announced that Weinstock’s project, which spotlights five women who made historic contributions to the U.S. space program, has been selected to become an official LEGO set.

“What a wonderful way to celebrate the scientific achievements of these five pioneering women,” says Zuber, the E.A. Griswold Professor of Geophysics and the first woman to lead a NASA planetary mission. “And I’m thrilled with the message that these LEGOs will send to girls — that they, too, can pursue their passions in science, technology, engineering, and math, and help make a better world.”

Last summer Weinstock submitted her concept, dubbed the Women of NASA, to LEGO Ideas, a platform that allows people around the world to propose new ideas for LEGO concepts. After a public voting period, during which Weinstock’s set received 10,000 votes in 15 days, her project underwent an official LEGO review.

Weinstock was inspired to create the set by her love of space and NASA, and her desire to showcase the contributions that women have made over the years to the field of space exploration. Above all, she hopes the set will help encourage more young girls to pursue STEM fields (science, technology, engineering, and math).

“I hope that ‘Women of NASA’ will be one little extra brick in the wall of trying to improve how women are perceived and shown in books, toys, and family programming,” Weinstock explains. “Anything I can do to help make sure girls understand that they can and should be interested in the sciences, engineering, and math, that is my goal. At the end of the day, that’s why I am doing this.”

The set depicts five trailblazers in NASA’s history: Margaret Hamilton, a computer scientist who led the development of software for the Apollo missions while at MIT; Mae Jemison, who became the first African-American woman in space in 1992; Katherine Johnson, known for calculating and verifying trajectories for the Mercury and Apollo programs; Sally Ride, who became the first American woman in space in 1983; and astronomer Nancy Grace Roman, one of the first female executives at NASA, who was instrumental in the planning of the Hubble Space Telescope.

Weinstock began creating LEGO figures back in 2009, when she constructed a LEGO likeness for her friend Carolyn Porco, a planetary scientist known for her imaging work on the Voyager and Cassini missions. After sharing an image of Porco’s LEGO figurine on Twitter, Weinstock received an outpouring of positive feedback and was inspired to create more figures in an effort to help promote the work of living scientists.

Since she built her first figurine, Weinstock has created LEGOs for a number of celebrated scientists and engineers, including primatologist Jane Goodall, oceanographer Sylvia Earle, physicist Stephen Hawking, and a number of MIT faculty members such as Ernest Moniz, professor of physics and special advisor to the president, and Sangeeta Bhatia, the John and Dorothy Wilson Professor of Health Sciences and Technology and Electrical Engineering and Computer Science and a member of MIT’s Koch Institute for Integrative Cancer Research.

“Being immortalized in LEGO is probably the coolest thing that has ever happened to me,” Bhatia says. “I hope it makes lots of little tinkerers dream about being engineers at MIT someday.”

Weinstock explains that she chose LEGOs as her medium as she feels “there is a childlike wonder to playing with a toy that you can make in people’s likeness.”

“One major goal for me is to get the public to recognize the history of women in the STEM fields. I’m hopeful that with this set more people will come to know these women,” Weinstock says. “Part of it is knowing these specific five women, but also part of it is setting an example. It’s really important to set an example for girls, as well as for boys, to normalize and make plain that women are expected to be in these fields and that it’s not strange or unusual.”

WHDH speaks with MIT staff member Maia Weinstock, who designed the original concept for the Women of NASA LEGO set. Weinstock explained that she is “really excited to see teachers and parents and kids tell me their stories of how they are going to use the set.”

Maia Weinstock, deputy editor of MIT News, speaks with Audie Cornish and Ari Shapiro of NPR’s All Things Considered about the LEGO set she designed that celebrates the history of women at NASA. Weinstock explains that she aimed to showcase “a diverse range of women who had different roles at NASA.”

A LEGO set created by Maia Weinstock, deputy editor of MIT News, has been selected to become an official LEGO set, reports Rebecca Shapiro for The Huffington Post. The set depicts five women who made historic contributions to NASA.

LEGO has selected MIT staff member Maia Weinstock’s Women of NASA set to become an official LEGO set, the Associated Press reports. Weinstock, who is the deputy editor of MIT News, is an “advocate for girls and women, particularly in the areas of science, technology, politics and athletics.”

Washington Post reporter Sarah Larimer writes that the Women of NASA LEGO set developed by Maia Weinstock, deputy editor for MIT News, will become an official LEGO set. Weinstock says she hopes the set, which depicts the contributions of five of NASA’s female pioneers, “helps to inspire the kids of the future!”

CNN reporter Ben Westcott writes that a LEGO set honoring women of NASA created by Maia Weinstock, deputy editor of MIT News, has been selected to become an official LEGO set. Westcott writes that the new set “will feature some of the pioneering women who played vital but sometimes under-appreciated roles in the U.S. space program.”