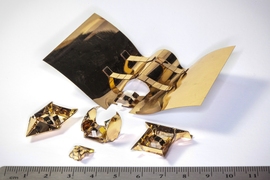 ↓ Download Image
Caption: Dubbed “Primer,” a new cube-shaped robot can be controlled via magnets to make it walk, roll, sail, and glide. It carries out these actions by wearing different exoskeletons, which start out as sheets of plastic that fold into specific shapes when heated. After Primer finishes its task, it can shed its “skin” by immersing itself in water, which dissolves the exoskeleton.

Caption:
Dubbed “Primer,” a new cube-shaped robot can be controlled via magnets to make it walk, roll, sail, and glide. It carries out these actions by wearing different exoskeletons, which start out as sheets of plastic that fold into specific shapes when heated. After Primer finishes its task, it can shed its “skin” by immersing itself in water, which dissolves the exoskeleton.

From butterflies that sprout wings to hermit crabs that switch their shells, many animals must adapt their exterior features in order to survive. While humans don’t undergo that kind of metamorphosis, we often try to create functional objects that are similarly adaptive — including our robots.

Despite what you might have seen in “Transformers” movies, though, today’s robots are still pretty inflexible. Each of their parts usually has a fixed structure and a single defined purpose, making it difficult for them to perform a wide variety of actions.

Researchers from MIT’s Computer Science and Artificial Intelligence Laboratory (CSAIL) are aiming to change that with a new shape-shifting robot that’s something of a superhero: It can transform itself with different “outfits” that allow it to perform different tasks.

Dubbed “Primer,” the cube-shaped robot can be controlled via magnets to make it walk, roll, sail, and glide. It carries out these actions by wearing different exoskeletons, which start out as sheets of plastic that fold into specific shapes when heated. After Primer finishes its task, it can shed its “skin” by immersing itself in water, which dissolves the exoskeleton.

“If we want robots to help us do things, it’s not very efficient to have a different one for each task,” says Daniela Rus, CSAIL director and principal investigator on the project. “With this metamorphosis-inspired approach, we can extend the capabilities of a single robot by giving it different ‘accessories’ to use in different situations.”

Primer’s various forms have a range of advantages. For example, “Wheel-bot” has wheels that allow it to move twice as fast as “Walk-bot.” “Boat-bot” can float on water and carry nearly twice its weight. “Glider-bot” can soar across longer distances, which could be useful for deploying robots or switching environments.

Primer can even wear multiple outfits at once, like a Russian nesting doll. It can add one exoskeleton to become “Walk-bot,” and then interface with another, larger exoskeleton that allows it to carry objects and move two body lengths per second. To deploy the second exoskeleton, “Walk-bot” steps onto the sheet, which then blankets the bot with its four self-folding arms.

“Imagine future applications for space exploration, where you could send a single robot with a stack of exoskeletons to Mars,” says postdoc Shuguang Li, one of the co-authors of the study. “The robot could then perform different tasks by wearing different ‘outfits.’”

The project was led by Rus and Shuhei Miyashita, a former CSAIL postdoc who is now director of the Microrobotics Group at the University of York. Their co-authors include Li and graduate student Steven Guitron. An article about the work appears in the journal Science Robotics on Sept. 27.

Primer builds on several previous projects from Rus’ team, including magnetic blocks that can assemble themselves into different shapes and centimeter-long microrobots that can be precisely customized from sheets of plastic.

While robots that can change their form or function have been developed at larger sizes, it’s generally been difficult to build such structures at much smaller scales.

“This work represents an advance over the authors' previous work in that they have now demonstrated a scheme that allows for the creation of five different functionalities,” says Eric Diller, a microrobotics expert and assistant professor of mechanical engineering at the University of Toronto, who was not involved in the paper. “Previous work at most shifted between only two functionalities, such as ‘open’ or ‘closed’ shapes.”

The team outlines many potential applications for robots that can perform multiple actions with just a quick costume change. For example, say some equipment needs to be moved across a stream. A single robot with multiple exoskeletons could potentially sail across the stream and then carry objects on the other side.

“Our approach shows that origami-inspired manufacturing allows us to have robotic components that are versatile, accessible, and reusable,” says Rus, the Andrew and Erna Viterbi Professor of Electrical Engineering and Computer Science at MIT.

Designed in a matter of hours, the exoskeletons fold into shape after being heated for just a few seconds, suggesting a new approach to rapid fabrication of robots.

“I could envision devices like these being used in ‘microfactories’ where prefabricated parts and tools would enable a single microrobot to do many complex tasks on demand,” Diller says.

As a next step, the team plans to explore giving the robots an even wider range of capabilities, from driving through water and burrowing in sand to camouflaging their color. Guitron pictures a future robotics community that shares open-source designs for parts much the way 3-D-printing enthusiasts trade ideas on sites such as Thingiverse.

“I can imagine one day being able to customize robots with different arms and appendages,” says Rus. “Why update a whole robot when you can just update one part of it?”

This project was supported, in part, by the National Science Foundation.

Prof. Daniela Rus talks to Gareth Mitchell of BBC’s Click about how she and her colleagues have developed shape-shifting robots that can change their exoskeletons to perform different tasks. “These types of robots could become superheroes for the robot kingdom,” explains Rus. “A robot could amplify all of its capabilities by taking on these different types of clothes.”

CSAIL researchers have developed a new shape-shifting robot that can change outfits in order to perform different tasks, reports Timothy Revell for New Scientist. “In the future, we imagine robots like this could become mini surgeons, squished into a pill that you swallow,” explains Prof. Daniela Rus.