David Hesslink: Taking his passion to the major leagues 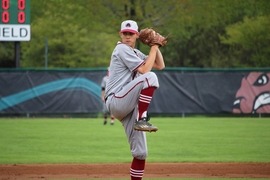 ↓ Download Image
Caption: Senior David Hesslink pitches against Babson College in Babson Park, Massachusetts during game one of the NEWMAC Championship Series on May 6, 2017. 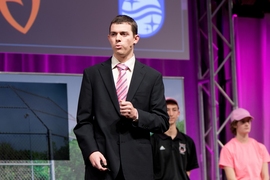 Caption:
Senior David Hesslink pitches against Babson College in Babson Park, Massachusetts during game one of the NEWMAC Championship Series on May 6, 2017.
Credits:
Photo: MIT Communications, Promotions and Marketing

Like many kids, senior David Hesslink collected baseball cards when he was younger. Among his most prized cards was that of pitcher Randy Johnson who, like Hesslink, is one of the rare players to swing right-handed but pitch left-handed. As fate would have it, after graduating this June Hesslink will join the very franchise his favorite player pitched for, when he starts work in the baseball operations office for the Seattle Mariners.

“I came to campus with no idea of what I wanted to do with my life,” says the mechanical engineering major. “The only thing I knew for sure was I loved playing baseball.” That started to change when he took 2.086 (Numerical Computation) as a sophomore. A question on a homework assignment sparked an idea for a project.

Working with postdoc Will Cousins, he developed a baseball simulator that accurately predicted the run total from past major league seasons. The algorithm Hesslink wrote accounted for everything — from batting averages to stolen base success rate. “My poor computer was whirring away, simulating millions of baseball games,” he adds.

Cousins soon invited Hesslink to join him on another project as part of a UROP (Undergraduate Research Opportunity Program). Together they worked with the Houston Astros on developing a pitch clustering algorithm in which the velocity, vertical movement, and horizontal movement for every style of pitch was tracked on a 3-D map for each pitcher.

“When you plot these things in 3-D, you get clouds of points that are separate for curveballs, fastballs, sliders, etc.,” Hesslink explains. This pitch clustering algorithm helped the Astros track and evaluate pitchers across the minor leagues.

The summer before his senior year brought Hesslink to Florida, where he was the analytics intern for the Tampa Bay Rays. He teamed up yet again with Cousins, who now works in research and development for the Rays, and they undertook a new project to invent a shifting algorithm that determined where the Rays should position their outfielders based on the pitcher and player at bat.

It’s no surprise to Cousins that Hesslink has landed a job in the major leagues. “David has tremendous intelligence and a relentless work ethic,” Cousins says. “He leaves a positive impression on everyone he interacts with.”

While Hesslink was putting his computational prowess to work both in the lab and the MLB, he was achieving similar results on the pitcher’s mound for MIT’s baseball team. At a game against the United States Coast Guard Academy in New London, Connecticut this March, Hesslink broke the record to become the pitcher with the most wins in MIT history.

“The best part of that day for me was emerging from the dugout to see my roommate and friends in the stands. They had driven two hours to surprise me,” he says.

His undergraduate work on algorithms for the Astros and Rays, coupled with his experience as a student-athlete, has poised Hesslink for a successful career in major league baseball. “It started with one problem on one homework assignment in 2.086, and then bloomed into what hopefully will be a full career,” Hesslink reflects.