Findings present a puzzle as to how such a huge object could have grown so quickly.
Jennifer Chu | MIT News Office
Publication Date:
Press Inquiries 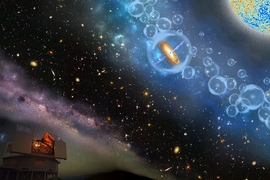 ↓ Download Image
Caption: Artist’s conceptions of the most-distant supermassive black hole ever discovered, which is part of a quasar from just 690 million years after the Big Bang. It is surrounded by neutral hydrogen, indicating that it is from the period called the epoch of reionization, when the universe's first light sources turned on. 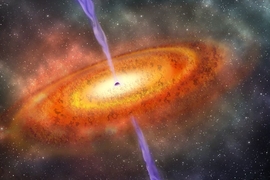 ↓ Download Image
Caption: Artist’s conceptions of the most-distant supermassive black hole ever discovered, which is part of a quasar from just 690 million years after the Big Bang. It is surrounded by neutral hydrogen, indicating that it is from the period called the epoch of reionization, when the universe's first light sources turned on.

Caption:
Artist’s conceptions of the most-distant supermassive black hole ever discovered, which is part of a quasar from just 690 million years after the Big Bang. It is surrounded by neutral hydrogen, indicating that it is from the period called the epoch of reionization, when the universe's first light sources turned on.

Caption:
Artist’s conceptions of the most-distant supermassive black hole ever discovered, which is part of a quasar from just 690 million years after the Big Bang. It is surrounded by neutral hydrogen, indicating that it is from the period called the epoch of reionization, when the universe's first light sources turned on.

A team of astronomers, including two from MIT, has detected the most distant supermassive black hole ever observed. The black hole sits in the center of an ultrabright quasar, the light of which was emitted just 690 million years after the Big Bang. That light has taken about 13 billion years to reach us — a span of time that is nearly equal to the age of the universe.

The black hole is measured to be about 800 million times as massive as our sun — a Goliath by modern-day standards and a relative anomaly in the early universe.

“This is the only object we have observed from this era,” says Robert Simcoe, the Francis L. Friedman Professor of Physics in MIT’s Kavli Institute for Astrophysics and Space Research. “It has an extremely high mass, and yet the universe is so young that this thing shouldn’t exist. The universe was just not old enough to make a black hole that big. It’s very puzzling.”

Adding to the black hole’s intrigue is the environment in which it formed: The scientists have deduced that the black hole took shape just as the universe was undergoing a fundamental shift, from an opaque environment dominated by neutral hydrogen to one in which the first stars started to blink on. As more stars and galaxies formed, they eventually generated enough radiation to flip hydrogen from neutral, a state in which hydrogen’s electrons are bound to their nucleus, to ionized, in which the electrons are set free to recombine at random. This shift from neutral to ionized hydrogen represented a fundamental change in the universe that has persisted to this day.

The team believes that the newly discovered black hole existed in an environment that was about half neutral, half ionized.

“What we have found is that the universe was about 50/50 — it’s a moment when the first galaxies emerged from their cocoons of neutral gas and started to shine their way out,” Simcoe says. “This is the most accurate measurement of that time, and a real indication of when the first stars turned on.”

Simcoe and postdoc Monica L. Turner are the MIT co-authors of a paper detailing the results, published today in the journal Nature. The other lead authors are from the Carnegie Institution for Science, in Pasadena, California.

A shift, at high speed

The black hole was detected by Eduardo Bañados, an astronomer at Carnegie, who found the object while combing through multiple all-sky surveys, or maps of the distant universe. Bañados was looking in particular for quasars — some of the brightest objects in the universe, that consist of a supermassive black hole surrounded by swirling, accreting disks of matter.

After identifying several objects of interest, Bañados focused in on them using an instrument known as FIRE (the Folded-port InfraRed Echellette), which was built by Simcoe and operates at the 6.5-meter-diameter Magellan telescopes in Chile. FIRE is a spectrometer that classifies objects based on their infrared spectra. The light from very distant, early cosmic objects shifts toward redder wavelengths on its journey across the universe, as the universe expands. Astronomers refer to this Doppler-like phenomenon as “redshift”; the more distant an object, the farther its light has shifted toward the red, or infrared end of the spectrum. The higher an object’s redshift, the further away it is, both in space and time.

Using FIRE, the team identified one of Bañados’ objects as a quasar with a redshift of 7.5, meaning the object was emitting light around 690 million years after the Big Bang. Based on the quasar’s redshift, the researchers calculated the mass of the black hole at its center and determined that it is around 800 million times the mass of the sun.

“Something is causing gas within the quasar to move around at very high speed, and the only phenomenon we know that achieves such speeds is orbit around a supermassive black hole,” Simcoe says.

When the first stars turned on

The newly identified quasar appears to inhabit a pivotal moment in the universe’s history. Immediately following the Big Bang, the universe resembled a cosmic soup of hot, extremely energetic particles. As the universe rapidly expanded, these particles cooled and coalesced into neutral hydrogen gas during an era that is sometimes referred to as the dark ages — a period bereft of any sources of light. Eventually, gravity condensed matter into the first stars and galaxies, which in turn produced light in the form of photons. As more stars turned on throughout the universe, their photons reacted with neutral hydrogen, ionizing the gas and setting off what’s known as the epoch of re-ionization.

Simcoe, Bañados, and their colleagues believe the newly discovered quasar existed during this fundamental transition, just at the time when the universe was undergoing a drastic shift in its most abundant element.

The researchers used FIRE to determine that a large fraction of the hydrogen surrounding the quasar is neutral. They extrapolated from that to estimate that the universe as a whole was likely about half neutral and half ionized at the time they observed the quasar. From this, they inferred that stars must have begun turning on during this time, 690 million years after the Big Bang.

“This adds to our understanding of our universe at large because we’ve identified that moment of time when the universe is in the middle of this very rapid transition from neutral to ionized,” Simcoe says. “We now have the most accurate measurements to date of when the first stars were turning on.”

There is one large mystery that remains to be solved: How did a black hole of such massive proportions form so early in the universe’s history? It’s thought that black holes grow by accreting, or absorbing mass from the surrounding environment. Extremely large black holes, such as the one identified by Simcoe and his colleagues, should form over periods much longer than 690 million years.

“If you start with a seed like a big star, and let it grow at the maximum possible rate, and start at the moment of the Big Bang, you could never make something with 800 million solar masses — it’s unrealistic,” Simcoe says. “So there must be another way that it formed. And how exactly that happens, nobody knows.”

This research was supported, in part, by the National Science Foundation (NSF), with support from construction of FIRE from NSF and from Curtis and Kathleen Marble.

The discovery of the oldest and most distant black hole ever observed could provide scientists with insights into the early stages of our universe, reports Will Dunham for Reuters. “This object provides us with a measurement of the time at which the universe first became illuminated with starlight,” explains Prof. Robert Simcoe.

USA Today reporter Doyle Rice writes that a team of astronomers, including several from MIT, has discovered the oldest and most distant supermassive black hole ever detected. “The black hole resides in a quasar and its light reaches us from when the universe was only 5% of its current age — over 13 billion years ago,” explains Rice.

The discovery of the oldest and most distant black hole ever detected has provided a team of astronomers new insights into our universe, writes Alyssa Meyers for The Boston Globe. “In some sense, what we’ve done is determine with a high degree of accuracy when the first stars in the universe turned on,” explains Prof. Robert Simcoe.

NPR’s Nell Greenfieldboyce reports that scientists have discovered the most distant supermassive black hole every discovered, and that the findings are shedding light on when starlight first appeared in our universe. "We have an estimate now, with about 1 to 2 percent accuracy, for the moment at which starlight first illuminated the universe,” explains Prof. Robert Simcoe.

When the first stars blinked on