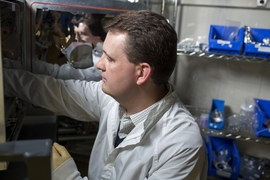 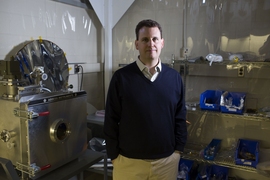 From a cosmic perspective, one could argue that we all come from stars.

Nearly 14 billion years ago, the Big Bang spawned the universe, yielding a primordial mixture of dark matter and gas within the first few minutes. The lightest elements in this gas — hydrogen and helium — were fused in the Big Bang itself, but the other elements that have since evolved into solar systems, planets, and living organisms were formed much later.

Scientists have traced production of these heavier elements, such as carbon and oxygen, to nuclear fusion within stars. But what exactly created the first stars, and when did that happen?

This question of stellar origin is the focus of Robert Simcoe, an associate professor of physics at MIT. Using telescopes on Earth and in space, Simcoe is peering far into the universe’s past, searching for a period when the first stars blinked on.

“What my field is progressing toward is [an understanding of] when and how the first stars turned on, and when galaxies started to look like they do today,” says Simcoe, who recently earned tenure. “We’re starting to see distant objects [with] very low chemical content. That’s one hint that you’re getting to an interesting time.”

Simcoe’s work indicates that something interesting may have taken place a mere 750 million years after the Big Bang, when the universe was only 5 percent of its present age. Last year, he was part of a team that observed the most distant known quasar — a galaxy that shines especially brightly because of an accreting black hole at its center; the light from this object has been traveling to Earth since then. Yet in the quasar’s immediate surroundings, the team found a large structure of diffuse hydrogen gas with no evidence of heavy metals. The finding suggested that this early quasar belonged to a period in which stars had yet to appear and pollute their surroundings. Simcoe says more distant quasars will have to be discovered and characterized before scientists can confirm exactly when the first stars arose — but the recent detection of pristine gas is a promising start.

“Right now it’s a pretty fuzzy boundary of what we’re looking for,” Simcoe says. “But you might as well think expansively.”

Simcoe began thinking expansively as a child. He grew up in Westborough, Mass., a suburb west of Boston, where the night sky offered clear views of distant stars. A third-grade project on space sparked Simcoe’s interest in observation, and he saved up for a small telescope, which he used in his backyard to pick out constellations. But the telescope’s magnification was too weak to detect far-off galaxies.

One weekend, Simcoe’s father took him on a road trip to Vermont, where amateur telescope-makers had gathered to swap parts and discuss building techniques. The Simcoes came away with a piece of glass that they honed over a period of weeks in the family basement, grinding with progressively finer abrasives to shape the curvature of an optical telescope objective. They fitted the mirror into a cardboard tube, and pointed it at the sky. The payoff was worth the work: Suddenly, Simcoe had a view of multiple galaxies, including Andromeda, and gaseous nebulae around the Milky Way.

An avid musician in high school, Simcoe also contemplated a future as a pianist. But when an audition at the Tanglewood summer music festival in western Massachusetts fell through, he reconsidered. An advertisement in the back of an astronomy magazine convinced him to try astronomy camp, and he soon headed to Arizona, where he learned to observe the sky with even stronger telescopes.

The experience propelled him to Princeton University, where, as an undergraduate, he played a minor part in a major project: the Sloan Digital Sky Survey, the largest, most detailed map of the universe to date, depicting hundreds of thousands of galaxies and quasars.

“This was one of the biggest experiments to happen in astronomy in the last 20 years,” Simcoe recalls. “It was the first time people made a digital map of a good chunk of the sky, and that seemed exciting and ambitious to me.”

The beginnings of a star search

From Princeton, Simcoe headed west, to the California Institute of Technology, where, as a graduate student, he started digging into the mystery of the first stars. At the time, scientific theory held that heavy elements like oxygen and carbon would only be found near the stars and galaxies that produced them. But astronomers began to observe evidence of chemicals far from any galaxy — a puzzle that theories failed to explain.

In his thesis, Simcoe analyzed the distribution of chemicals throughout the universe, and came up with an estimate of the volume of chemicals that may have leaked out of galaxies. His work ultimately informed more realistic models for how galaxies evolve.

“We used to think of galaxies as little vacuum cleaners: They would suck in gas and turn it into stars,” Simcoe explains. “Instead, it’s almost like they’re a factory, taking in pure pristine gas from the Big Bang, polluting it with these other chemicals and spewing it back out.”

In 2000, a group of universities commissioned the twin Magellan Telescopes in Chile, affording a view of extremely distant objects, like the old quasars and galaxies that help in identifying the era of the first stars. MIT is a shareholder in the telescopes, meaning the Institute’s researchers have regular access to the facility — an opportunity Simcoe seized.

He joined MIT’s physics department as a Pappalardo Postdoctoral Fellow in 2003, and soon after, accepted a faculty position. Since then, he has taken a handful of trips each year to Chile, spending a week at a time at the telescopes, in the remote Atacama Desert.

The observatory includes a dormitory, where scientists sleep during the day. Before nightfall, they rise to calibrate the telescopes before heading to the dining hall.

“Around the dinner table you can get all the scuttlebutt from different places,” Simcoe says. “It’s outside the conference circuit, where everyone’s more formal. Here, everyone’s tired, off their guard — it’s very much like camp.”

When the sun goes down, the work begins, as astronomers spend the night analyzing readouts of objects captured by the telescopes. Based on such observations, Simcoe has identified a number of far-off objects, including the quasar whose spectrum lacked heavy elements.

In the next few years, Simcoe will continue looking for signs of the universe’s first stars, using Magellan, other observatories on Earth, and the Hubble Space Telescope. Today’s stars are produced with “a little carbon and oxygen sprinkled in with gas,” he says. But immediately following the Big Bang, only hydrogen and helium were in any supply. Simcoe says the very first stars may have formed from molecular hydrogen cooling — a very different process than the atomic cooling from carbon and oxygen that gives rise to today’s stars. Detecting far-off stars composed of hydrogen alone, he says, remains a distant goal for astronomers.

“Once you’ve reached those, you know you’re at generation zero,” Simcoe says. “We don’t know exactly when that happened, or how we’re going to get there. But we think we’re in the right ballpark as far as how far back we need to look.”

When the first stars blinked on