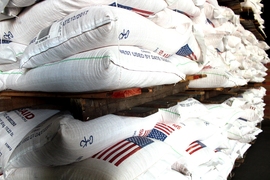 ↓ Download Image
Caption: Researchers are systematically exploring a variety of alternative packaging materials and containers to see which work best, and most cost-effectively, at reducing losses in food aid. Pictured are food aid bags in a Texas warehouse. 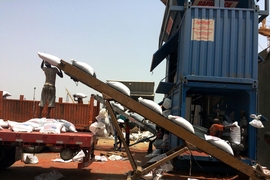 Caption:
Researchers are systematically exploring a variety of alternative packaging materials and containers to see which work best, and most cost-effectively, at reducing losses in food aid. Pictured are food aid bags in a Texas warehouse.

The U.S. Agency for International Development (USAID) ships out food aid worth more than $1 billion every year — over a million tons of grains, soybeans, and other staples sent to dozens of countries around the world. Even though the agency estimates that only about 1 percent of that food is lost to spoilage, that’s still over 10 million dollars’ worth of food annually that never gets to needy people’s plates. And some within-nation food procurement suffers even higher losses.

Now, researchers are systematically exploring a variety of alternative packaging materials and containers to see which work best, and most cost-effectively, at reducing such losses.

For the past year, a research project run by the MIT Comprehensive Initiative on Technology Evaluation (CITE) has been studying possible solutions to the problem. They have made multimillion-dollar purchases of a milled corn and soybean product, split peas, and sorghum, and had them shipped to two African destinations, using several different types of packaging. They have carefully tracked and inspected the shipments to determine the effectiveness of the packaging, and identify any issues related to supply chains and handling processes along the way. Most of these shipments have now arrived in Africa.

Mark Brennan, an MIT PhD student and CITE researcher who has been managing the purchasing process, presented preliminary findings from the work at the TechCon conference at MIT and at the annual Production and Operations Management Society (POMS) and Humanitarian Technology (HumTech) conferences. Last year, he traveled with CITE researcher Prithvi Sundar to North Dakota, Nebraska, Kansas, Louisiana, Arkansas, and Texas, as well as to Djibouti, Ethiopia, and South Africa to work with the packaging and commodity suppliers, transport firms, and warehouses involved in food aid supply chains. Brennan is supported by MIT's Center for Transportation and Logistics.

Most current food aid shipments, Brennan says, “have been using the same packaging for decades,” mostly paper and woven polypropylene bags. The new experiment is designed to test a variety of options, including larger bags that may reduce unit costs, chemical compounds on bags that prevent insects from reproducing, and airtight liners to keep out moisture and insects. An initial set of test shipments involved about $1.5 million of food, using 11 different packaging products. The shipments totaled approximately 1,000 metric tons.

“The goal is to identify cost-effective packaging,” Brennan says. The shipments are being evaluated at various points to see the degree to which better packaging can reduce the need for fumigation of the product, which has both costs and potential health effects, and how much it can cut down on losses due to spoilage, insect infestation, mold, or spillage.

Even though the percentages involved may not be that large, Brennan says, the amounts of food being shipped are so vast that any savings could be significant. “They lose an estimated 1 percent to spoilage and breakage,” he says, out of an estimated $1 billion to $2 billion in annual food aid shipments. “That’s a lot of money.” The potential for eliminating $10 million to $20 million in annual losses “could feed thousands of families in a time of need,” he says.

There’s no substitute for actually trying out the different packaging options under real-world conditions, he says. Already, they have found that some packaging types that seemed promising were limited by the capacity of the companies producing them. In other cases, a new kind of bag simply didn’t fit with the bagging equipment being used by some suppliers — limitations that would never be apparent just by looking at spec sheets.

The research has already led to the production and testing of some paper bags with the added chemical compound that prevents insects from reproducing, which had not been produced before, Brennan says. Like the others, the bag shows promise for providing better protection than existing options.

“With smarter packaging, we can change when, from where, and to whom we send food aid, making food assistance more equitable and affordable,” he says. And the implications reach beyond protecting what’s already being shipped, he says: Potentially, better packaging could make it feasible to send more different kinds of crops to more different parts of the world — shipments that would be too likely to spoil using existing methods. Alternatively, he notes, if the team does not find that new packaging improves outcomes in a cost-effective way, then this study may indicate that USAID’s current packaging practices are already cost-effective.

The project is part of the overall MIT CITE program, funded by USAID, which aims to evaluate a wide variety of development technologies using an interdisciplinary approach and a variety of quantitative and qualitative methods to better understand which technologies best serve families living in poverty.