Q&A: Richard Binzel on tips for observing the 2017 solar eclipse

Whether you'll be in the path of totality on Aug. 21 or anywhere else in North America, you should be able to view the eclipse.
Watch Video
MIT Alumni Association
Publication Date:

Caption:
In the Boston area on Aug. 21, the moon takes its first bite out of the sun at 1:28 p.m. Eastern Daylight Time. The maximum eclipse is at 2:46 p.m. EDT. Sixty-three percent of the sun will be covered at maximum. Because this is less than 100 percent, the MIT campus will see only a partial eclipse. The partial eclipse ends with the moon’s last bite at 3:59 p.m. EDT.

It has been nearly a century since a total solar eclipse traversed coast-to-coast across the continental United States. Everyone in North America will have a view of the moon blocking at least part of the sun, in what's known as a partial solar eclipse (depending on local cloud cover, of course). But the spectacle of a lifetime is seeing the sun completely, 100 percent eclipsed by the moon. A narrow “path of totality” will stretch from Salem, Oregon on the West Coast to Lincoln, Nebraska, to St. Louis, Missouri, to Charleston, South Carolina on the East Coast. In these locations, even cloudy skies won't keep you from experiencing the magic of a total eclipse. At and around MIT, the moon will take its first “bite” out of the sun at 1:28 p.m. EDT, max out at 63 percent coverage at 2:46 p.m., and take its last bite out of the sun at 3:59 p.m.

Eclipse enthusiast Richard P. Binzel, a professor of earth, atmospheric, and planetary sciences at MIT, recently gave the MIT Alumni Association some tips on viewing 2017's spectacular eclipse. Binzel will be leading an Alumni Association Travel Program trip to Idaho to view the totality in person. He joins a number of leaders at and around MIT who will be helping individuals observe and enjoy the eclipse. On MIT campus, there will be a solar viewing party on the Kresge Oval, free and open to the public. A special viewing event at MIT's Wallace Observatory will also take place.

Q: What’s the difference between seeing a partial versus total solar eclipse?

A: A total solar exlipse is a million times more spectacular than a partial eclipse. That is not hyperbole, it is precisely the factor by which the brightness of the sun and the sky changes (in an instant!) at the moment of transition from partial eclipse to total eclipse. At the moment total eclipse begins, the last sliver of the sun’s disk becomes hidden behind the edge of the moon. For the duration of the total eclipse — about two minutes — nightfall is all around you even though it is midday. Stars appear in the sky! All that is visible of the sun is its eerie outer glowing halo called the corona. Then just as instantly, the total eclipse ends and daylight dramatically returns as the moon continues its motion, allowing the sun’s disk to re-emerge.

Q: Where will this year's total solar eclipse take place?

A: NASA's interactive map lets you zoom in exactly on where is the closest or most convenient place for you to travel to be in the path of the total eclipse on August 21. 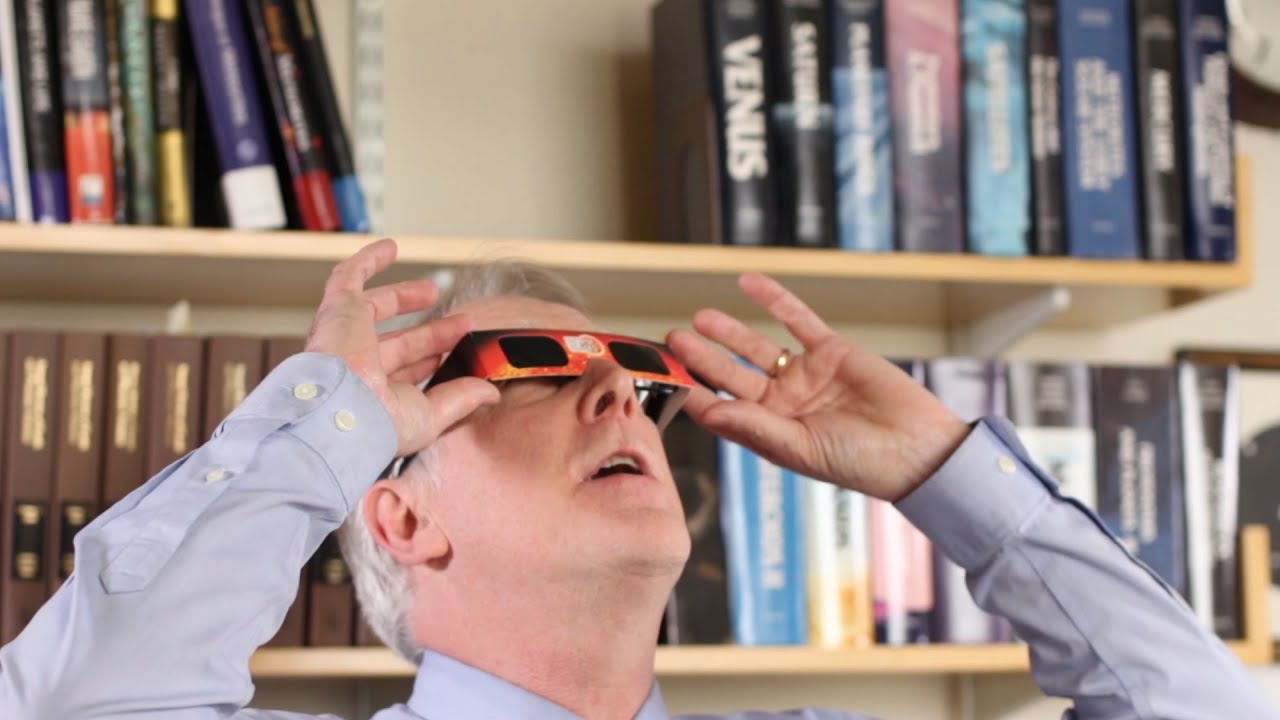 Play video
A total solar eclipse is coming to North America on Aug. 21, 2017! MIT Professor Richard Binzel explains why this is such a unique event and how you can safely observe it.

Q: Even those not in the path of totality will be able to view the eclipse. So what should viewers do about eye safety?

A: Everyone talks about eye safety during solar eclipses. It is not because the sun’s light is any more dangerous during an eclipse. (It’s not!) The issue is that eclipses are a time when we are all interested to stare at the sun, and it is never safe to stare at the sun without proper protection. So no matter where you will be on August 21, order a pair of special “eclipse glasses.” They are relatively inexpensive and are readily available, while supplies last. Regular sunglasses are not sufficiently safe for solar eclipse viewing. It is perfectly safe to be pursuing normal activities outside during an eclipse without eclipse glasses. Just have those glasses handy so that you can take a moment to stare at the sun and check out the workings of the cosmos! If you want to use binoculars or a telephoto lens, proper protection is required over the front of those lenses too!

Q: Where outside is a good place to watch?

A: Any place outside that you can see the sun itself is a place where you can view the eclipse. It can be a yard, a driveway, a parking lot, a baseball field, etc. Any place where the sun is not blocked by trees or buildings is a place where you can view the eclipse. In places where a total solar eclipse is visible, even if the weather is cloudy and you can’t see the sun at all, you will notice that everything is unusually dark as you get to the time of maximum eclipse. In fact, you may see streetlights switching on in response to the darkening skies.

Q: What time is the eclipse, and what will I see?

A: Everything happens on Monday, August 21, starting in the morning on the West Coast through early afternoon on the East Coast as the moon’s shadow sweeps from west to east. For exact details on the timing of events, click on your viewing location using NASA's interactive map. If you are in the path of totality, and the sun is completely covered by the moon, this is the only exception when you can stare at the sun without eclipse glasses. That’s because the sun’s bright disk is covered and you will see only the faint outer halo of the sun. That halo, called the solar corona, will be studied intensively by scientists during the fleeting minutes of totality. If you decide to travel to be within the “path of totality” on August 21, good for you! Arrive at your destination at least one day — 24 hours; two days might be even better — in advance as eclipse traffic jams on or before August 21 could be legendary! Some folks may take to the highways to race against the weather as the time of totality approaches. Traffic safety suggests this may not be a good idea. Remember, you will experience the sudden change in darkness even if you find yourself under clouds for the main event.

Watch this video example of the dramatic change from a partial eclipse to a total eclipse, demonstrating why you should journey into the path of totality. You can also check out a NASA visualization for how and why the moon’s shadow will move across the U.S. on August 21.

A version of this article was originally published by the MIT Alumni Association.

Training students' eyes on the skies