Apps created for everyone, by anyone 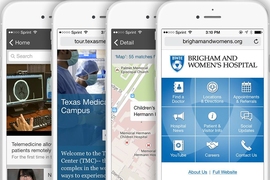 ↓ Download Image
Caption: Modo Labs’ platform is being used by 200 universities and colleges, as well as Fortune 500 companies and hospitals worldwide, reaching millions of users.

Caption:
Modo Labs’ platform is being used by 200 universities and colleges, as well as Fortune 500 companies and hospitals worldwide, reaching millions of users.

In 2010, MIT launched its iPhone app to much fanfare from people on campus and beyond.

Shortly following the app’s release — and inspired by its wide popularity — Yu left MIT and founded Modo Labs to commercialize the core platform, then called Kurogo, that simplifies app-building. The platform provides quick and easy access to back-end data and a simple mobile app-assembly interface, so people without programming skills can build apps and app modules.

Today, Modo Labs’ platform is being used by 200 universities and colleges, as well as Fortune 500 companies and hospitals worldwide, reaching millions of users. In the near future, Yu wants the platform to be adopted by 1,000 higher education institutions and other organizations. “It’s spreading globally,” Yu says. “We’ve grown 100 percent over the last year, so we’re excited to expand.”

Modo Labs provides its software to clients in the cloud. The startup works with its clients, who usually represent different departments within a school or organization, such as information technology services, facilities, and marketing, to get them started. Those clients, in turn, train users to expand their apps’ features.

Modo Labs offers several optimization innovations that make it a quick and easy app-builder. From early on, the platform was designed to sync across multiple mobile devices, operating systems, and screen sizes, without needing to code for each one — a concept of “write once and deploy everywhere,” Yu says.

Another major innovation, Yu says, was designing mobile-optimized middleware — a software connector between a web application and operation systems or databases — that pulls data from various systems, such as bus trackers, student information, dining menus, and online maps.

A bus-tracking system, for instance, will have an application program interface (API) key. By plugging that API key into the Modo Platform and hitting configure, someone can quickly create an app module that tracks buses. Today in some cases, Yu adds, only a URL is required to create a module, “which takes five minutes or less.”

The benefits of institution- or business-owned apps are becoming increasingly apparent, Yu says. Yu points to client Indiana State University, which has attributed some enrollment growth to its app. Modules that give admissions and campus tour information, for instance, are geared toward attracting local high school students. Georgetown University’s app, Yu says, aims to involve students with campus programs upon acceptance. “At the time they get admitted, they have this app and the experience of engaging with campus starts,” he says.

Companies — which started reaching out to Modo because they liked the look of the MIT app — have used similar modules, as well as others aimed at employee convenience, such as modules that enable booking conference rooms or preordering food. “Companies value Modo’s experience with millennials and can see how they can take advantage of the technology originally built for MIT to help with employee engagement and retention,” Yu says. Hospitals can add appointment and doctor-finding modules.

Over the years, there have been a few hundred different apps made with the Modo Platform, “and many interesting modules,” Yu says.

One company recently created a module that pulls data from parking garage sensors and shows which floors have free spaces in real-time. At universities, some new popular modules include add/drop class options, dining nutritional information, and connections to third-party ride-sharing services. Some created laundry machine trackers, so students can see when a machine is available in real-time. Webcam modules are also becoming ubiquitous, especially at dining locations, so students can check to see if it’s busy before heading over.

Universities are also leveraging small, Bluetooth-connected sensors, or beacons. Georgetown recently set up beacons at parking spots outside of dorm buildings during moving day. Using the university’s app, parents and students could determine how long wait times were as their cars passed by each beacon. “There’s a lot of interest from universities now in providing very detailed information about campus,” Yu says.

Modo’s story begins in 2007, when Yu was developing a mobile application framework for MIT services. Carrying around six different mobile devices daily — including Palm Treos, BlackBerries, and the newly released iPhones — he struggled to access information quickly and easily on each device.

“Even with the latest and greatest iPhone, it would take eight minutes to figure out who is teaching a class and how to find the professor’s office. That was unacceptable, especially at a place like MIT,” Yu says.

Yu started developing the open-source MIT Mobile Framework platform, which could access the Institute’s back-end data and sync across multiple devices. This led to the creation of the Mobile Web App in 2008 and the iPhone app in 2010, which earned 2,000 downloads in a few short months. Even institutions such as Rice University, Brown University, and Peking University in China were using the platform.

“That [wide adoption] was really awesome,” Yu says. “At the same time, that opened a can of worms for my team, because everyone started asking questions about using it. This led us to think about starting a company.”

An email from an incoming freshman served as an entrepreneurial spark for Yu. In his message, the student said the app alleviated concerns he had about living on campus, including locating classes, keeping track of shuttles, or what to do in emergencies. He concluded by saying, “this technology should be spread to schools nationwide.”

With that inspiration — and sage council from MIT mentors such as Hal Abelson, the Class of 1922 Professor of Electrical Engineering and Computer Science, who is part of Google’s App Inventor for Android team — Yu launched Modo.

The first customer was, of course, MIT. Modo then moved on to other top universities, including Harvard University, the University of Notre Dame, Princeton University, Stanford University, and Georgetown, and now to an increasing number of state and community colleges. Corporate clients include General Electric, Capital One, and other Fortune 500 companies. Massachusetts General Hospital and Brigham and Women’s Hospital have been using the platform for the past five years.

As it happens, the “friendly competition” among these clients has helped Modo constantly reinvent, Yu says. Each school, company, or hospital wants to create a better app than its competitor. “We have to do one better for each client, and so on, and so on,” Yu says. “We have to keep making a better product.”

Modo has raised nearly $15 million in funding. Last year, the startup hosted an “Appathon,” where students from Harvard, Notre Dame, Florida State University, Arizona State University, and George Washington State University — many without programming skills — designed apps for their schools in 24 hours. For five years, Modo has also organized the Kurogo Higher Ed Mobile Conference each spring that explores app development and trends in higher education, among other topics, and showcases the year’s best campus apps.

Modo is now working on more targeted communications for schools, including personalized alerts that will, for instance, notify students about class requirements or about sports activities. “Push notifications [will] no longer just broadcast to everybody, but [be] personalized to individuals,” Yu says.

For companies, the startup hopes to develop an internal communication feature to replace daily email blasts on topics such as open enrollments, training, and other services. “The platform aims to provide that next level of engagement,” Yu says.

The past, present and future of MIT’s iPhone app