Prototyping a pump for brain treatment

Caption:
Summer Scholar Alejandro Aponte works on a prototype for a pump that can deliver drugs to the brain. Aponte, a University of Puerto Rico at Mayaguez mechanical engineering major, is working to make the pump small enough to be easily implantable.
Credits:
Photo: Denis Paiste/Materials Processing Center

Summer Scholar Alejandro Aponte is interning in the lab of Michael J. Cima, the David H. Koch Professor of Engineering at MIT, where he is working on the design of a pump to deliver drugs to the brain.

A mechanical engineering major at the University of Puerto Rico at Mayaguez, Aponte has worked before developing different types of instrumentation, but this is his first time working with research related to human biology. The pump prototype is attached to a needle through which medicine can flow for drug delivery.

Aponte has been focusing on keeping different aspects of the pump as static as possible. MIT postdoc Ritu Raman is guiding Aponte through the seven-week Summer Scholar program, which is sponsored by the Materials Processing Center and the Center for Materials Science and Engineering. 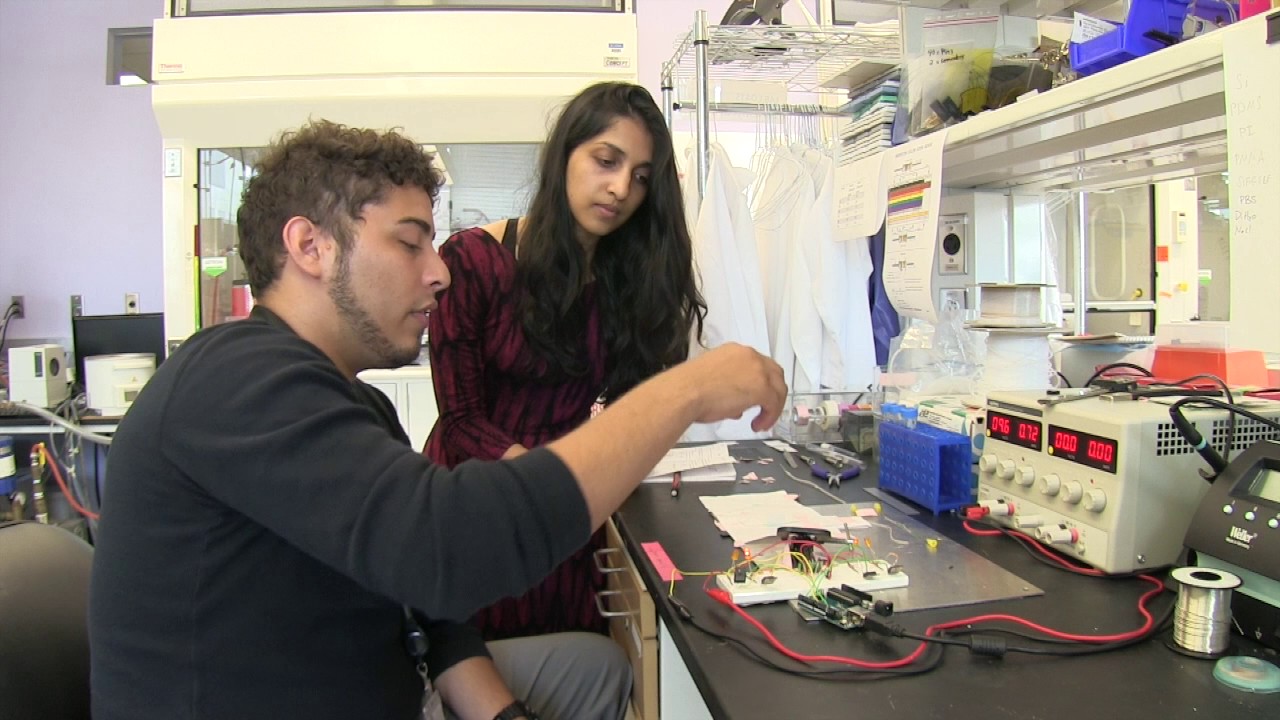 “That will be really important for when we want to make these smaller and implantable, because not only do we not want movement of the needle, but we also don't want moving of this central actuation portion,” Raman explains.

Aponte was working to move from a modular version made up of separate components — such as the electrical dock and the tubing dock — to an integrated design. Doing so would allow easier measurement of initial pressure, and also prevent bubbles from forming.

“That's actually very important for when we're building prototypes,” Raman says. “We want to take apart every little piece and think about how can we make this part better and that better, and then at the end, we can put it all together.”

Aponte says the objective is to get the setup to be as small as possible. "This is very important because the type of work that we are doing requires the pump to be implantable, so that's our main target here,” he says.

Raman says the Cima lab is working on a range of different types of implants and platforms for diagnosing and treating brain disorders, specifically mood disorders like anxiety and depression that affect many people in the United States and around the world.

“The critical part of this platform is we have these probes that go into very specific neural circuits inside the brain and we want to infuse drugs to those circuits,” Raman says.

Aponte brings his prior experience with instrumentation development to the project.

“I was able to see the overview of the project quick and be comfortable with it,” he says. “And the cherry on top is that it is related to neural science, which has been a topic that I've been really dying to learn. I'm very excited to know that my work might help others' lifestyles be better in the future.”

Participants in the Summer Scholars program, which is also known as the Research Experience for Undergraduates, presented their results at a poster session on Aug. 3. The program runs from June 15 to Aug. 5 on the MIT campus.