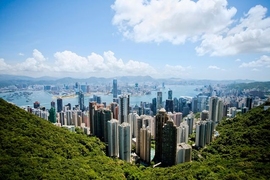 Caption:
Lester officiated the grand opening of the new center in Hong Kong and reiterated MIT’s commitment to working and collaborating in this region for the long term.

Caption:
Guest of Honor, Carrie Lam, congratulated MIT in bringing the Node to the city.

Caption:
Carrie Lam listened to students’ introductions of their projects created during the Node’s educational program.

The MIT Hong Kong Innovation Node yesterday announced the opening of its permanent, 5,000-square-foot facility, which will serve as a hub for collaborative innovation and entrepreneurship for MIT students, professors, and alumni, as well as others working in Hong Kong.

The opening ceremony at the facility was attended by Chief Executive of Hong Kong Carrie Lam, as well as alumni and friends of MIT, Innovation Node leaders, students, and startups, and MIT professors who helped launch and guide the Innovation Node’s development.

Located in Kowloon Tong, in an area closely linked to major Hong Kong universities and rapid transportation, the facility includes cutting-edge prototyping equipment, a makerspace, and a variety of multipurpose areas that can be used for lectures, classes, and working spaces.

By enabling new programs and initiatives, the new facility will boost innovation, education, and collaboration between the MIT and Hong Kong communities, including high school and college students, professors, entrepreneurs, and business leaders, says Charlie Sodini, the Clarence J. LeBel Professor in Electrical Engineering, who serves as faculty director for the Innovation Node. “It really is about education — we brought MIT’s entrepreneurship and making curriculum across the Pacific Ocean,” he says.

Conceived by the MIT Innovation Initiative, the Node was first announced in November 2015. In June 2016, the Innovation Node launched its first program, a unique hardware accelerator program designed to educate students in key areas of innovation practice. In January came the launch of its flagship program, the MIT Entrepreneurship and Maker Skills Integrator (MEMSI), a two-week, immersive miniaccelerator that connects MIT students with peers from universities in Hong Kong.

But those programs have been held in rented venues around Hong Kong. Having a permanent space saves time and resources, creates a stronger sense of community, and “opens the door for many more programs” for students, alumni, professors, and even the public, says Brian Yen, executive director of the Innovation Node. “Now that we have our own space, we can start running regular programs, from maker courses to education programs to workshops,” he says.

Inside the Innovation Node is equipment for varying levels of prototyping. For light, rapid prototyping, there are soldering irons, 3-D printers, and equipment for making electronics. For more sophisticated projects, there are laser cutters and machines that make custom circuit boards. The makerspace also has basic construction tools, such as table saws, pipe cutters, and power drills. A wet lab that will support biological engineering tools is in the works.

Positioned above a manufacturing facility, the space also gives students access to more advanced prototyping tools, such as molding equipment and automated machines used for cutting, carving, and milling materials including wood, aluminum, and plastics. “When students do advanced stuff, they can walk downstairs and pay for their time,” Yen says.

Among students who have already benefited from the facility is Aagya Mathur, an MIT Sloan School of Management student who co-founded the startup aam, which began as part of MEMSI in January.

The “femtech” startup — meaning it uses technology to address women’s health issues — is developing a “smart sleeve” for blister packs of contraceptives or other pills, which recognizes individual pills and sends the user a reminder if one hasn’t been taken on schedule. The startup was one of the first to use the new facility over the summer. Now, it has a working prototype. “Because we are a hardware startup, a big piece of the startup is prototyping,” Mathur told MIT News. “The node is really great about having so many machines, such as 3-D printers, mills, vacuum pumps, laser cutters, bandsaws, and soldering stations we were able to use.”

Mathur and her co-founders also took advantage of the Innovation Node’s close proximity to Shenzhen, a major city with advanced manufacturing facilities located a 40-minute train ride away. Over the summer, they visited four manufacturing plants for a look behind the scenes. “It was really eye-opening to see the intricacies of [manufacturing] in person,” Mathur says. “You see how much it costs, how fast things go, and that’s valuable, especially for a hardware startup.”

At the opening event, aam was one of several student startups to present the prototypes they launched at the Innovation Node. Others were: BeThere, a video-recording device on wheels that parents can control remotely to keep an eye on their young children; InterFace, a smart lanyard that enhances interaction among conference participants; Sella, a sensor-embedded office chair that improves sitting posture for employees; Sightecho, one of the first Innovation Node participants, which is developing an augmented-reality mask for divers that displays vital information, including depth and oxygen level; and TNKK, a high school team from Hong Kong making a smart stress ball that provides tactile sensory relief.

A major benefit of the physical space is that it provides continued access to resources for alumni of Hong Kong universities and MIT, says Marina Chan, director of strategic initiatives for the Innovation Node. “In Hong Kong, university students get a lot of resources, but once they graduate, that access is considerably shrunk,” she says. “In a way, we’re an attachment area for them.”

Innovation Node alumni from MIT and Hong Kong universities can drop by to continue projects or mentor budding entrepreneurs. MIT professors can visit during trips to the region to interact with students or deliver lectures. Startups that launched in the Innovation Node also have continued access to the space for further prototyping, company meetings, and, perhaps as importantly, free coffee. “It’s fuel for the mind,” Yen jokes.

In the future, the Innovation Node may also open to allow members of the public to use the makerspace, for example to take classes in app inventing or 3-D printing. It could also serve as an offline meeting spot for edX and MITx users. “We want to curate the best of what MIT has to offer and bring in the ‘mens et manus’ philosophy into the local context,” says Chan, referring to MIT’s “mind and hand” motto.

As space is scarce in Hong Kong, the facility was designed to be multifunctional under tight area constraints. MIT architecture alumnus Dennis Cheung SM ’13, one of the first Innovation Node participants a year ago, designed the space along with his team at UPSOP, a design studio he co-founded. Inspiration came from MIT Department of Architecture Professor George Stiny’s concept of “shape grammar,” which says furniture and other features in spaces should be designed for assembling in different configurations that encourage working and social interactions.

All of the furniture is custom-made and, along with the whiteboards and partitions, can be scooted around on wheels to form different seating, socializing, lecturing, and working arrangements. Apart from optimizing space, the design is meant to inspire creativity. “It doesn’t look boring,” Yen says. “One of the things we wanted is for people to come in and feel the spirit of innovation, and feel creative about how they use the space.”