Pushing the limits of athletic performance 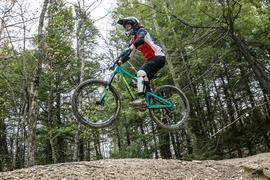 The panic in the pit of your stomach as you fly over your handle bars is all too familiar to any mountain biker. Most cyclists dust themselves off and carry on riding, perhaps with more caution. But Anette (Peko) Hosoi, professor and associate department head for operations in MIT’s Department of Mechanical Engineering, is not like most bikers. She straightens her helmet, stands her bike up, and immediately begins examining its mechanics.

Hosoi is at New Hampshire’s Highland Mountain Bike Park. Accessible only by ski lift, the park presents bikers with white-knuckle turns and stomach-curling bumps. “I kept thinking ‘this would be the most fun thing ever — if I could just stop flying off my bike,’” she later recalls. After assessing her cross-country bike, she determines the geometry is all wrong. If she is going to return to Highland Mountain, she will need a proper mountain bike.

As instructor of 2.001 (Mechanics and Materials I), Hosoi, who is the Neil and Jane Pappalardo Professor of Mechanical Engineering, has access to dozens of eager engineering students. She adds a new assignment to the syllabus: Determine which bike on the market has the “truss, deformation, and yield” that make it optimal for mountain biking.

“I realized this was a fantastic way to teach mechanics,” she says. With that insight, Hosoi founded the Sports Technology Group, now known as MIT 3-Sigma Sports (formerly STE@M).

MIT 3-Sigma Sports aims to solve the biggest engineering problems across sports. The program connecting students and faculty with alumni and industry partners who work together to improve athletic performance by using engineering to enhance endurance, speed, accuracy, and agility in sports. Some of the research projects stem from the needs of industry partners, while others are inspired by students’ and faculty’s personal passions and experience with sports.

Graduate students and former varsity athletes Sarah Fay and Jacob Rothman have both found ways to bridge their personal passions with their academic pursuits. Fay, who played squash and field hockey as an undergraduate at MIT, is working to identify the optimal weight for squash rackets by modeling the swing of a racket based on a person’s height and weight. Rothman, who played on MIT’s baseball team as an undergraduate, is co-founder of Perch, a company that uses 3-D cameras to assess the velocity of a weightlifter’s movements and provide instant feedback on how to improve form and minimize the risk of injury.

Fay and Rothman are not alone applying the work done in the lab to athletics. Many MechE faculty are conducting cutting-edge research at the forefront of sports technology. Here are just a few sports that MechE faculty are helping to improve:

Running: Harnessing the power of the stride

Smartphones have revolutionized long distance running — providing everything from route planning, to heart-rate monitoring, to audio entertainment. But the batteries in these devices don’t always last as long as the run, sometimes leaving runners in a difficult position.

Professor Sang-Gook Kim and his students have designed an energy-harvesting shoe to convert each stride into power. Air bladders embedded in the sole of the shoe convert the foot’s impact into airflow along the runner’s gait. Both the outflow and inflow from the airbladders are directed at a dual-microturbine enclosure, which generates electricity that can be used to power the runner’s device of choice.

The results produce 90 milliwatts of power for walking at 3 mph and a staggering 900 milliwatts when jumping. This means that six hours of walking can generate enough power to charge an iPhone battery by 50 percent. “You can do a lot with that power,” Kim says. “Joggers won’t get lost and can get help quickly in emergencies.”

The next step for Kim will be working with a top manufacturer on designing a shoe that can incorporate this energy-harvesting technology. One immediate application could be to design running shoes with varying levels of elasticity. “The idea is to control the stiffness of the shoe like a sleep-number bed,” Kim adds. This technology can do more than just improve the lives of runners and joggers, he notes. Military boots could be outfitted with this device to provide power to troops on the ground.

Cricket: Using a robotic arm to test the umpire’s decisions

In cricket, if a ball makes slight contact with a bat and is caught in the field before it touches the ground, the batsman is out. Contact between the bat and the ball can be extremely difficult to detect, especially when the ball grazes the bat at 90 mph, so umpires rely on Decision Review System (DRS) technology. DRS, which depends on sophisticated edge-detection and ball-tracking technologies, is used to confirm whether a batsman is out. When the International Cricket Council (ICC) sought to test the accuracy of DRS, they turned to Sanjay Sarma, the Fred Fort Flowers and Daniel Fort Flowers Professor in Mechanical Engineering.

A lifelong sports fan, Sarma was tasked with assessing the edge-detection and ball-tracking technologies used in DRS. “Our goal was to create a gold standard to calibrate the technology against,” says Sarma, who also serves as MIT’S vice president for open learning. To test edge-detecting, Sarma, along with Jaco Pretorius SM ’04 and PhD student Stephen Ho, built a mechanical arm with a ball secured at the end. As the arm spun at high knots, a bat outfitted with sensors was moved into position to repeatedly replicate fine contact with the ball. Meanwhile, to test ball-tracking, they built a frame with a laser field that could detect a ball’s exact coordinates. The data generated from both the sensors on the bat and the laser field were then used to calibrate the technologies currently used in DRS.

The project brought the MIT team to the U.K., where they visited Lord’s Cricket Ground, home of cricket’s most revered trophy, the Ashes urn. “I have met many Nobel Laureates, but a childhood dream I was able to fulfill was to have dinner at Lord’s Cricket Ground,” Sarma says with a smile.

The ICC is using the data collected by Sarma and his team to calibrate DRS technologies and enhance officiating.

Golf: How an Emmy inspired a new coaching tool

Engineering and Emmy Awards rarely go hand-in-hand — unless you’re Principal Research Scientist Brian Anthony, who won an Emmy for his work on Swing Vision for CBS prior to coming back to MIT. Swing Vision uses two cameras, one recording 2,000 frames per second and the other recording 12,500 frames per second. The slower video is used by on-air commentators to analyze a golfer’s swing, while the fast video is used to gather stats about the velocity, launch angle, and backspin of the club and ball for each of their shots.

Anthony is now using his background in video instrumentation to develop event detection and similarity algorithms that can be used for manufacturing process control, medical diagnostics, and sports. Videos of a gold-standard athletic move — the perfect plié or right hook, for example — are compared to a new video of the move. “By comparing the two videos, you can make decisions based on the time-space path that one video follows after another,” he explains.

The algorithm then provides guided instructions for how the subject can best emulate the gold standard. Anthony hopes this technology could one day become a new coaching tool. “The idea is to one day make a product in which you could compare a Little Leaguer’s swing to a standard appropriate for that individual — maybe Cal Ripken — and tell him how to mimic Cal’s moves,” explains Anthony.

So what is the next frontier in sports technology?

Hosoi and the students in course 2.98 (Sports Technology: Engineering and Innovation) are working on an array of projects that will help inform the future of sports. These projects range from data analysis to biomechanics and materials.

In May, students and faculty across several departments presented their research at the 2017 Sports Technology Summit. In the rapt audience were various industry partners with a vested interest in supporting advances in sports technology, such as Adidas, the Milwaukee Brewers, the U.S. Olympic Committee, and the San Antonio Spurs. The research presented at the summit may just hold the key to securing their next championship or designing a game-changing product.

“The summit provides companies with a snapshot of the breadth of work going on across departments,” explains Christina Chase, co-director of MIT 3-Sigma Sports and co-instructor of course 2.98. “It also showcases our students’ work, which helps facilitate collaborations and in some cases recruitment.”

The sports technology research being conducted at MechE is crucial for the advancement of human endurance and performance in sports. When there is a problem plaguing a particular sport, the students and faculty in the MechE community are ready to roll up their sleeves, lace up their running shoes or pick up a bat, and solve it.

David Hesslink: Taking his passion to the major leagues