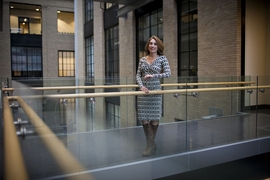 Krystyn Van Vliet, an MIT professor in the departments of Materials Science and Engineering and Biological Engineering, with wide-ranging interests in research and innovation, has been named as the Institute’s new associate provost. She will assume this role on Sept. 1.

Van Vliet succeeds Karen Gleason, who has decided to step down in June 2018. MIT Provost Martin Schmidt announced both changes today in an email to the Institute community.

In his email, Schmidt thanked Gleason for her “excellent and creative leadership in all areas of her responsibility,” adding that she has been “a highly valued colleague and advisor, both to me personally and as a member of Academic Council.”

Van Vliet, the Michael (1949) and Sonja Koerner Professor of Materials Science and Engineering and Biological Engineering, will take over the responsibilities of associate provost in two phases. Beginning in September, she will oversee space planning, allocation, and renovations for the 2017-18 academic year, a role that includes serving as co-chair of MIT’s Committee for the Review of Space Planning.

The associate provost also oversees MIT’s industrial engagement efforts, including MIT’s Industrial Liason Program and the Technology Licensing Office — something Gleason will continue to do until June 2018. At that point Van Vliet will add those duties to her portfolio.

“I am delighted to have the responsibilities of the Office of the Associate Provost be in excellent hands for the coming year,” Schmidt wrote in the email. “Please join me in thanking Karen for her continued service and congratulating Krystyn on her new role.”

For her part, Van Vliet said she was pleased to be serving the Institute in a new capacity.

“I look forward to working with the provost and MIT's several great teams that will help all of us work, learn, and live better on campus,” says Van Vliet. “Since my first visit to MIT in 1998, I was impressed by how many impactful ideas and people came out of these curiously interconnected buildings. It will be a pleasure to build on Karen Gleason's many efforts to shape and modernize our campus, and to create stronger engagements between our community and industry innovators in and through those spaces.”

Van Vliet conducts interdisciplinary research that examines the interplay between mechanical and chemical characteristics of materials. Her lab conducts both experimental and computational studies in order to understand and engineer materials with applications ranging from energy to medicine.

Among other leadership roles at the Institute, Van Vliet directed the DMSE Nanomechanical Technology Laboratory from 2004 to 2012, has co-directed the MIT Biomedical Engineering Minor Program from 2008 to the present, and heads the Singapore-MIT Alliance in Research and Technology (SMART) BioSystems and Micromechanics research group, which has about 175 researchers and develops new diagnostic and treatment technologies for cell and tissue diseases.

Gleason has been a member of the MIT faculty since 1987. Before becoming associate provost, she served MIT as the associate dean of engineering for research, the associate director for the Institute of Soldier Nanotechnologies, and executive officer of the Department of Chemical Engineering.

During her tenure as associate provost, MIT has embarked on the largest set of expansion and renovation projects in Institute history. This includes the Kendall Square Initiative, a large redevelopment project, and many capital projects, including the MIT.nano building, Kresge Auditorium, the MIT Chapel, and Buildings NW23, 9, and 31. New spaces have been developed for the Institute for Data, Systems, and Society; Office of Digital Learning; Advanced Functional Fabrics of America; and the Center for Transportation and Logistics.