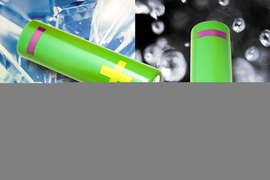 ↓ Download Image
Caption: Researchers may have determined why fairly brittle electrode materials in batteries don’t crack under the strain of expansion and contraction cycles when they are used and recharged.
Credits: Image: Jose-Luis Olivares/MIT 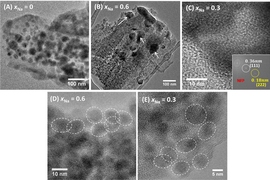 ↓ Download Image
Caption: These images, made by transmission electron microscopy, show the progression of the sodium-olivine electrode material, first in the original starting material in powdered form (a); after sodium is inserted in different concentrations (b and c); and after an amorphous, glassy structure forms in between tiny areas of microcrystalline structure (d and e).
Credits: Image courtesy of the researchers. 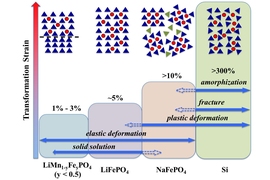 ↓ Download Image
Caption: These diagrams illustrate the way different materials expand when subjected to an influx of ions. Silicon, at right, has one of the highest degrees of expansion known.
Credits: Image courtesy of the researchers.

Caption:
Researchers may have determined why fairly brittle electrode materials in batteries don’t crack under the strain of expansion and contraction cycles when they are used and recharged.
Credits:
Image: Jose-Luis Olivares/MIT

Caption:
These images, made by transmission electron microscopy, show the progression of the sodium-olivine electrode material, first in the original starting material in powdered form (a); after sodium is inserted in different concentrations (b and c); and after an amorphous, glassy structure forms in between tiny areas of microcrystalline structure (d and e).
Credits:
Image courtesy of the researchers.

Caption:
These diagrams illustrate the way different materials expand when subjected to an influx of ions. Silicon, at right, has one of the highest degrees of expansion known.
Credits:
Image courtesy of the researchers.

When you charge a battery, or when you use it, it’s not just electricity but also matter that moves around inside. Ions, which are atoms or molecules that have an electric charge, travel from one of the battery’s electrodes to the other, making the electrodes shrink and swell. In fact, it’s been a longstanding mystery why fairly brittle electrode materials don’t crack under the strain of these expansion and contraction cycles.

The answer may have finally been found. A team of researchers at MIT, the University of Southern Denmark, Rice University, and Argonne National Laboratory has determined that the secret is in the electrodes’ molecular structure. While the electrode materials are normally crystalline, with all their atoms neatly arranged in a regular, repetitive array, when they undergo the charging or discharging process, they are transformed into a disordered, glass-like phase that can accommodate the strain of the dimensional changes.

The new findings, which could affect future battery design and even lead to new kinds of actuators, are reported in the journal Nano Letters, in a paper by MIT professor of materials science and engineering Yet-Ming Chiang, graduate students Kai Xiang and Wenting Xing, and eight others.

In theory, if you were to stretch out a lithium-ion battery over a fulcrum, with an electrode on each side, Chiang says, “it would go up and down like a seesaw” as it was being charged and discharged. The change in mass as ions shuttle back and forth is also accompanied by an expansion or contraction that can vary, depending on the material, “from 1 percent or so, all the way up to silicon, which can expand by 300 percent,” he says.

This research dealt with a different kind of battery, called a sodium-ion battery. The scientists looked at a particular class of materials seen as potential battery cathodes (positive electrodes), called phospho-olivines, and specifically at sodium-iron-phosphate (NaFePO4). They found that it is possible to fine-tune the volume changes over a very wide range — changing not only how much the material expands and contracts, but also the dynamics of how it does so. For some compositions, the expansion is very slow and gradual, but for others it can increase suddenly.

“Within this family of olivines,” Chiang says, “we can have this slow, stepwise change,” spanning the whole range from almost zero charge to very high power. Alternatively, the change can be “something very drastic,” as is the case with NaFePO4, which rapidly changes its volume by about 17 percent.

“We know that brittle compounds like this would normally fracture with less than a 1 percent volume change,” Chiang says. “So how does this material accommodate such large volume changes? What we found, in a sense, is that the crystal gives up and forms a disordered glass” instead of maintaining its precisely ordered lattice.

“This is a mechanism that we think might apply more broadly to other compounds of this kind,” he says, adding that the finding may represent “a new way to create glassy materials that may be useful for batteries.” Once the change to a glassy composition takes place, its volume changes become gradual rather than sudden, and as a result “it may be longer-lived,” Chiang says.

The findings could provide a new design tool for those trying to develop longer-lived, higher-capacity batteries, he says. It could also lead to possible applications in which the volume changes could be put to use, for example as robotic actuators or as pumps to deliver drugs from implantable devices.

The team plans to continue working on easier ways of synthesizing these olivine compounds, and determining whether there is a broader family of crystalline materials that shares this phase-changing property.

This research provides “a seminal contribution that links the electrochemical, mechanical, and crystallographic aspects of battery electrodes,” says William Chueh, an assistant professor of materials science and engineering at Stanford University, who was not involved in this work.

“Electrode materials used in lithium-ion batteries shrink and expand during charging and discharging, and often disproportionally within a single particle. If the strain cannot be accommodated, the particle fractures, eventually causing the battery to fail. This is similar to a cold ceramic cup cracking when boiling water is poured in too quickly,” Chueh says. This work “identifies a new strain-relief mechanism when the volume change is large, which involves the material turning from a crystalline solid to an amorphous one rather than fracturing.”

This discovery, he says, “may lead scientists to revisit battery materials previously deemed unusable due to the large volume change during charging and discharging. It would also lead to better predictive models used by engineers to design new generation batteries.”

The team included Dorthe Ravnsbaek at the University of Southern Denmark and MIT, Zheng Li at MIT, Liang Hong and Ming Tang at Rice University in Texas, and Kamila Wiaderek, Olaf Borkiewicz, Karena Chapman, and Peter Chupas at Argonne National Laboratory in Illinois. The work was supported by the U.S. Department of Energy.