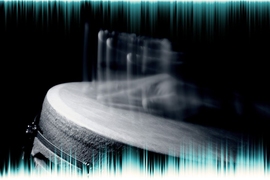 ↓ Download Image
Caption: A team of neuroscientists has found that people are biased toward hearing and producing rhythms composed of simple integer ratios — for example, a series of four beats separated by equal time intervals. 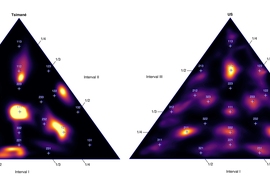 ↓ Download Image
Caption: A chart shows the differences in the distribution of responses between the Tsimane and U.S. participants. Researchers found that the Tsimane tended to prefer different ratios than Westerners, and that these ratios corresponded to simple integer ratios found in their music but not in Western music.

Caption:
A team of neuroscientists has found that people are biased toward hearing and producing rhythms composed of simple integer ratios — for example, a series of four beats separated by equal time intervals.
Credits:
Image: MIT News

Caption:
A chart shows the differences in the distribution of responses between the Tsimane and U.S. participants. Researchers found that the Tsimane tended to prefer different ratios than Westerners, and that these ratios corresponded to simple integer ratios found in their music but not in Western music.

When it comes to perceiving music, the human brain is much more tuned in to certain types of rhythms than others, according to a new study from MIT.

A team of neuroscientists has found that people are biased toward hearing and producing rhythms composed of simple integer ratios — for example, a series of four beats separated by equal time intervals (forming a 1:1:1 ratio).

This holds true for musicians and nonmusicians living in the United States, as well as members of a Bolivian tribe who have little exposure to Western music. However, the researchers found that the Bolivians tended to prefer different ratios than Westerners, and that these ratios corresponded to simple integer ratios found in their music but not in Western music.

“Both of these cultures seem to prioritize rhythms that are formed by simple integer ratios. It’s just that they don’t prioritize all of them,” says Josh McDermott, the Frederick A. and Carole J. Middleton Assistant Professor of Neuroscience in the Department of Brain and Cognitive Sciences at MIT and the senior author of the study, which appears in the Jan. 5 issue of Current Biology.

The paper’s lead author is Nori Jacoby, a former MIT postdoc who is now a Presidential Scholar in Society and Neuroscience at Columbia University.

For this study, the MIT team devised a new way to reveal biases in the brain’s interpretation of sensory input. These biases, called “priors,” are thought to be based on our past experience of the world and to help resolve sensory stimuli that could be interpreted in multiple ways. For example, in a noisy room, priors on speech help you to extract a conversation of interest by biasing perception toward familiar speech sounds, words, and linguistic forms.

“You often rely on your prior knowledge of the states of the world that are more or less likely, to help relieve some of that ambiguity,” McDermott says. “When you get some piece of data and you have to make your best guess as to what’s actually out there in the world, you use the prior — the prior probability of different things in the world — to constrain your guess.”

To try to reveal priors for musical rhythm, the researchers first asked American college students to listen to a randomly generated series of four beats and then tap back the rhythm that they heard. The researchers recorded the taps and then played the tapped sequence back to the student, who tapped it out again. With each iteration, the new rhythm changed slightly, just as words morph as they are spoken from person to person in a game of “telephone.” Eventually, the tapped sequences became dominated by the listener’s internal biases. By running the procedure many times, Jacoby and McDermott were able to measure these biases for simple rhythms.

“It’s a way to probe the mental representation of what people unconsciously expect,” Jacoby says. “We wanted to find a way to ‘read their minds,’ but without requiring people to introspect or verbalize anything.”

“The rhythms that have high probability in people’s heads seem to coincide with these simple integer rhythms that we know to be common in Western music,” McDermott says.

The researchers found the same results in musicians and nonmusicians, suggesting that the priors are formed by listening to music rather than making it.

Next, the researchers performed the same study with members of the Tsimane tribe, who live in a remote part of Bolivia and have little exposure to Western music. In a study published earlier this year, McDermott and his colleagues found differences between Tsimane and Western preferences for chords. While Westerners dislike dissonant chords, such as the combination of C and F#, the Tsimane rated them just as likeable as “consonant” chords, which feature simple integer ratios between the acoustic frequencies of the two notes.

When musical rhythm was tested, the researchers found that, like Westerners, the Tsimane tended to produce rhythms consisting of simple integer ratios, but the ratios they generated were different than those preferred by Western subjects.

The rhythms favored by the Tsimane appear to be consistent with those that have been documented in the few records that exist of Tsimane music, McDermott says, a finding that offers evidence that priors are based on musical exposure.

“Using an iterated learning task, Western listeners could be compared to the Tsimane, as such giving insight into the process of cultural transmission and a possibly innate predisposition for small-integer-ratio rhythms,” says Henkjan Honing, a professor of music cognition at the University of Amsterdam, who was not part of the research team.

In future work, the researchers hope to use this technique to study other groups of people.

“What we plan on doing over the next year or two is to look at this in a number of different cultures and see how closely these priors mirror what we know about various cultures’ music,” Jacoby says.

The research was funded by a Hebrew University ELSC Postdoctoral Fellowship, the Center for Society and Neuroscience at Columbia University, and a McDonnell Scholar Award.

Boston Globe reporter Andy Rosen writes about a new MIT study examining how the brain perceives rhythm that finds people tend to reorganize random series of beats into familiar patterns. “We think that these biases on rhythm, they probably are really important to how you hear music,” explains Prof. Josh McDermott.