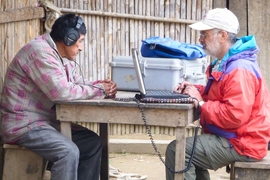 ↓ Download Image
Caption: Brandeis University professor Ricardo Godoy conducts the experiment in a village in the Bolivian rainforest. The participants were asked to rate the pleasantness of various sounds, and Godoy recorded their response.

Caption:
Brandeis University professor Ricardo Godoy conducts the experiment in a village in the Bolivian rainforest. The participants were asked to rate the pleasantness of various sounds, and Godoy recorded their response.
Credits:
Photo: Alan Schultz

In Western styles of music, from classical to pop, some combinations of notes are generally considered more pleasant than others. To most of our ears, a chord of C and G, for example, sounds much more agreeable than the grating combination of C and F# (which has historically been known as the “devil in music”).

For decades, neuroscientists have pondered whether this preference is somehow hardwired into our brains. A new study from MIT and Brandeis University suggests that the answer is no.

In a study of more than 100 people belonging to a remote Amazonian tribe with little or no exposure to Western music, the researchers found that dissonant chords such as the combination of C and F# were rated just as likeable as “consonant” chords, which feature simple integer ratios between the acoustical frequencies of the two notes.

“This study suggests that preferences for consonance over dissonance depend on exposure to Western musical culture, and that the preference is not innate,” says Josh McDermott, the Frederick A. and Carole J. Middleton Assistant Professor of Neuroscience in the Department of Brain and Cognitive Sciences at MIT.

McDermott and Ricardo Godoy, a professor at Brandeis University, led the study, which appears in Nature on July 13. Alan Schultz, an assistant professor of medical anthropology at Baylor University, and Eduardo Undurraga, a senior research associate at Brandeis’ Heller School for Social Policy and Management, are also authors of the paper.

A new study out of MIT and Brandis University suggests musical preferences are cultural in origin and not hardwired in the brain.

For centuries, some scientists have hypothesized that the brain is wired to respond favorably to consonant chords such as the fifth (so-called because one of the notes is five notes higher than the other). Musicians in societies dating at least as far back as the ancient Greeks noticed that in the fifth and other consonant chords, the ratio of frequencies of the two notes is usually based on integers — in the case of the fifth, a ratio of 3:2. The combination of C and G is often called “the perfect fifth.”

Others believe that these preferences are culturally determined, as a result of exposure to music featuring consonant chords. This debate has been difficult to resolve, in large part because nowadays there are very few people in the world who are not familiar with Western music and its consonant chords.

“It’s pretty hard to find people who don’t have a lot of exposure to Western pop music due to its diffusion around the world,” McDermott says. “Most people hear a lot of Western music, and Western music has a lot of consonant chords in it. It’s thus been hard to rule out the possibility that we like consonance because that’s what we’re used to, but also hard to provide a definitive test.”

In 2010, Godoy, an anthropologist who has been studying an Amazonian tribe known as the Tsimane for many years, asked McDermott to collaborate on a study of how the Tsimane respond to music. Most of the Tsimane, a farming and foraging society of about 12,000 people, have very limited exposure to Western music.

“They vary a lot in how close they live to towns and urban centers,” Godoy says. “Among the folks who live very far, several days away, they don’t have too much contact with Western music.”

The Tsimane’s own music features both singing and instrumental performance, but usually by only one person at a time.

The team performed the same tests with a group of Spanish-speaking Bolivians who live in a small town near the Tsimane, and residents of the Bolivian capital, La Paz. They also tested groups of American musicians and nonmusicians.

“What we found is the preference for consonance over dissonance varies dramatically across those five groups,” McDermott says. “In the Tsimane it’s undetectable, and in the two groups in Bolivia, there’s a statistically significant but small preference. In the American groups it’s quite a bit larger, and it’s bigger in the musicians than in the nonmusicians.”

When asked to rate nonmusical sounds such as laughter and gasps, the Tsimane showed similar responses to the other groups. They also showed the same dislike for a musical quality known as acoustic roughness.

The findings suggest that it is likely culture, and not a biological factor, that determines the common preference for consonant musical chords, says Brian Moore, a professor of psychology at Cambridge University, who was not involved in the study.

A study co-authored by Prof. Josh McDermott dispels the theory that musical preference is rooted in biology, writes Jacqueline Howard for CNN. "We need to accept and document the differences in how other cultures hear the world. The opportunities to do so are rapidly diminishing with the diffusion of Western music around the world,” says McDermott.

Wall Street Journal reporter Daniel Akst writes that MIT researchers have found that our musical tastes are culturally instilled. The researchers played consonant and dissonant chords from members of a remote Amazonian tribe and found that “they had no preference for one sound over the other—unlike the large majority of North Americans and Europeans, who prefer consonance.”

Taste in music is based on culture and not biology according to a new study by Prof. Josh McDermott, writes Emily Reynolds for Wired UK. The Tsimane' tribe the researchers surveyed plays music one line at a time, not simultaneously like Western countries, and they had no preference for dissonant and consonant sounds.

Atlantic reporter Ed Young writes about a study by MIT researchers that finds musical preferences may be cultural in origin. The researchers examined the musical preferences of remote Amazonian village and found they “don’t care about consonance or dissonance. They can tell the difference between the two kinds of sounds, but they rate both as being equally pleasant.”

A new study co-authored by Prof. Josh McDermott finds that musical preference may stem from cultural origins, writes Vivian Wang for The Boston Globe. “It raises the possibility that things vary a lot more from culture to culture than people might have wanted to accept,” says McDermott.

By studying how people from different cultures respond to consonant and dissonant chords, MIT researchers have found that musical tastes may be rooted in cultural origins, not biology, writes Sarah Kaplan for The Washington Post. The results “underscore the degree of variation that exists across cultures in terms of how people hear and evaluate music," explains Prof. Josh McDermott.

A new study by MIT researchers finds that culture and not biology may be responsible for our musical tastes, writes Amina Khan for The Los Angeles Times. The researchers found that “people who haven’t been exposed to Western music don’t find certain ‘discordant’ sounds unpleasant at all,” suggesting that musical preferences are not innate.

A paper co-authored by Prof. Josh McDermott examines the musical preferences of a society with minimal exposure to Western culture, writes Chelsea Leu for Wired. “Maybe an innate bias for consonance exists, but that doesn’t mean every culture develops it,” Leu writes regarding the society’s lack of preference for consonant or dissonant sounds.