Home strep test could save time and money 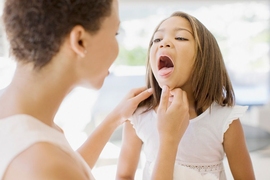 ↓ Download Image
Caption: A new study, performed at MIT Medical, shows that most parents were able to successfully perform the Streptococcus (“strep throat”) test on their children.

Caption:
A new study, performed at MIT Medical, shows that most parents were able to successfully perform the Streptococcus (“strep throat”) test on their children.

Most children who visit a doctor because they have a sore throat are tested for Streptococcus (“strep throat”), a contagious condition that can cause serious complications if not treated. A new study led by MIT and Beth Israel Deaconess Medical Center researchers suggests that the time spent on these visits could be saved by having parents test their children at home.

The study, performed at MIT Medical, shows that most parents who tried were able to successfully perform the test on their children. If this approach were implemented on a large scale, it could save time for parents, who would avoid a trip to the doctor’s office, and for doctors, who could devote their time to treating other conditions. It could also help patients get treatment more quickly.

“The results supported our hypothesis, which is that parents can probably do this test at home, and with this added information, care could be delivered in a way that is more efficient for everyone,” says David V. Diamond, associate medical director of MIT Medical and an author of the study, which appears in the Journal of Participatory Medicine.

Hartman, who practices in a large pediatric clinic based in Westwood, Massachusetts, began offering home strep tests to parents in 2008. His practice now distributes about 5,000 of the tests every year to parents of children ages 5 to 9 — the age group that comes down with the most cases of strep throat.

To perform the test, parents swab their child’s throat, then deposit the swab into a tube and add some chemical reagents. A test strip is then dipped into the tube and reveals a positive or negative result in about 10 minutes.

For the new study, MIT Medical doctors and nurses recruited parents of children between the ages of 5 and 16 who were brought in with sore throats. Of 120 parents invited to participate, 76 agreed and 71 successfully performed the test after watching a three-minute instructional video.

Of these parents, 57 said they were confident and 14 said they were somewhat confident about performing the test. Fifty-four of the tests were negative and 17 were positive. The negative samples were sent to the lab for bacterial culture to confirm the results, and one of those returned positive, representing a false negative rate of 1.9 percent. That is similar to the rate when the test is done in the clinic by medical assistants.

The researchers envision that parents could perform the test on their own at home, then communicate with their health care provider, who could prescribe antibiotics without the need for an office visit. If the home test was negative but the child was still not feeling well in a few days, the parent could bring the child to the doctor’s office for further evaluation and, if necessary, another test.

In Hartman’s practice, giving parents the opportunity to test at home has contributed to a significant decline in strep throat office visits, which Hartman says was the number one reason for office visits in 2008 but has since dropped to number four. That has allowed doctors in the practice to spend more time helping children with chronic conditions such as asthma, obesity, and behavioral problems.

“One of the reasons we started this is we need to focus more on the ever-rising population of kids with chronic diseases,” Hartman says.

Danny Sands, an assistant clinical professor of medicine at Harvard Medical School, agrees that this approach could help to free up health care professionals to treat other patients.

“What they have shown is that we can teach parents how to do a self-diagnosis test at home with their kids,” says Sands, who was not involved in the study. “If that could be applied appropriately and that information can be given to health care professionals so the appropriate antibiotic can be prescribed, that’s an important step toward a time when we can use fewer clinical resources for strep throat.”

The researchers hope that their results will help build support for the idea of parents performing this test and other simple diagnostics on their own.

“The ultimate goal for parents is to self-manage their kids in their home and not have to leave the home and go to a doctor unless the kid is really, really sick,” Hartman says.

This type of home testing approach would likely be most appealing for health care centers that do not rely on fee-for-service income, the researchers say. For parents, doing a strep test at home would save money as well as time because the kits cost only a few dollars, less than a typical copayment for a doctor’s visit.

FOX 25’s Bob Dumas reports on a study by MIT Medical that shows most parents could successfully perform strep tests at home. David Diamond, associate medical director of MIT Medical, explains that in the healthcare field, “we are empowering patients to help us take care of their health,” adding that this test, “would be yet another advance in this regard.”

Improving prevention of and responses to flu outbreaks

How to stop the flu