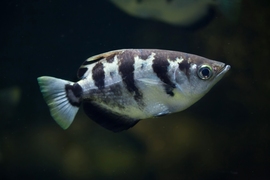 ↓ Download Image
Caption: In addition to spit-shooting, an archer fish, pictured here, can launch itself from a near standstill, out of the water to a height of more than two times its body length. “Unlike, say, a shark that comes barreling up from the bottom to catch its prey, an archer fish’s initial momentum is zero,” says Alexandra Techet, associate professor of mechanical engineering at MIT.

Caption:
In addition to spit-shooting, an archer fish, pictured here, can launch itself from a near standstill, out of the water to a height of more than two times its body length. “Unlike, say, a shark that comes barreling up from the bottom to catch its prey, an archer fish’s initial momentum is zero,” says Alexandra Techet, associate professor of mechanical engineering at MIT.

The archer fish is arguably the ninja of the aquatic world, known for its stealth-like, arrow-straight aim while shooting down unsuspecting prey. Once the fish has sighted its target, it can spit jets of water to dislodge insects from overhanging leaves, making them topple into the water.

But once an insect is shot down, it becomes fair game for any passing predator, and the archer fish is not necessarily the first to catch the fallen quarry. That’s when the fish’s other equally impressive, though less-studied, prey-capture strategy can be an advantage. In addition to spit-shooting, an archer fish can launch itself from a near standstill, out of the water to a height of more than two times its body length. In this way, it can catch an insect in midair, ensuring that no other competitor steals its prey.

Now MIT engineers have detailed the hydrodynamics of the archer fish’s rocket-like jumping behavior in a paper published in the Journal of Experimental Biology.

“Unlike, say, a shark that comes barreling up from the bottom to catch its prey, an archer fish’s initial momentum is zero,” says Alexandra Techet, associate professor of mechanical engineering at MIT. “All that force has to be created close to the surface, at a near standstill. That’s what makes this fish really interesting to study and completely different than your traditional leaping and jumping problem.”

Techet says understanding how the archer fish propels itself out of the water can help guide the design of surfacing underwater vehicles.

“It would be nice to see a way to create a vehicle that could, say, spyhop from water to air, over a short duration,” Techet says, referring to the way some whales raise their heads vertically out of the water. “Results from this [study] might help us to come up with theories for how you might connect biology to mechanics.”

Training a fish to jump

Archer fish are typically found in mangrove swamps, river mouths, and upstream brackish and freshwater regions in Southeast Asia. The team obtained 10 small archer fish from a local aquarium store and housed them in a 55-gallon “home tank” filled with brackish water. They trained the fish to jump by suspending freeze-dried shrimp above the water’s surface and temporarily withdrawing the food if the fish spit. After about a month of training, five of the 10 fish were trained to reliably jump for their food.

The researchers then set up an experimental 10-gallon tank, which they filled with water and seeded with polyamide particles — tiny beads that are virtually invisible to the naked eye and neutrally buoyant, meaning their density is equal to that of the surrounding water. Techet and her colleagues placed a laser below the tank to illuminate the beads with infrared light, a technique known as Particle Image Velocimetry (PIV). A high-speed camera, placed in front of the tank, captured the motions of the beads and therefore the direction and velocity of any eddies and vortices produced in the water.

“We can track from one time to another where those particles have moved, and can use image processing to get velocity vectors,” Techet explains. “Ideally that will give us an idea of how much thrust or energy the fish can generate to get itself up to some height.”

In separate trials, the team placed each of the five fish into the experimental tank and suspended above it a piece of freeze-dried shrimp at varying heights, from one-fourth to more than two times a fish’s body length. The high-speed camera recorded 98 jumping sequences, averaging about 16 to 24 jumps per fish.

To catch a prey

Frame by frame, the team analyzed each fish’s body motions while jumping, as well as the direction and velocity of the particles displaced by the fish’s movements.

From the motions of each fish, Techet and her team identified three general phases in jumping behavior: hovering, thrust production, and gliding.

In the first phase, the fish hovers just under the water’s surface, with its snout positioned at the surface to spot any overhanging prey. By alternately flapping its pectoral fins and waving its caudal fin, the fish is able to hover in place as it looks for prey.

The second phase begins as the fish prepares to produce upward thrust by raising its pectoral and pelvic fins while simultaneously beating its tail back and forth, until the fish produces enough thrust to launch itself out of the water.

During the final gliding phase, the fish essentially glides through the air and up to the bait, accelerating only due to gravity or to changes in its posture, and not from any further thrust production.

Interestingly, the team noted that the number of tail beats each fish produced was related to the height of the bait: The higher the bait, the more times the fish beat its tail, likely to produce enough thrust to reach the food. Mendelson points out that this is an impressive feat, seeing as the fish, stationed right at the water’s surface, has a limited amount of space in which to build up the adequate amount of thrust.

“How do you accelerate when the most critical thing that’s in scarce supply is the space you have to do it in?” Mendelson says. “There’s no running start. And to me that’s one of the biggest takeaways.”

Remarkably, the fish were able to launch themselves to a height as great as 2.5 times their body length. The researchers also tracked the direction and speed of the particles in the tank as the fish propelled itself out of the water, creating eddies in its wake. On average, the maximum velocities during each run ranged from 0.6 to 1.7 meters per second squared.

“The speed they leave the water with is on the order of Olympic swimmer speeds,” Mendelson says. “The record for the 100-meter freestyle record is a little under 50 seconds, so, 2 meters per second. So these fish are almost as fast as an Olympic swimmer, but actually going up rather than horizontal.”

Next, the team plans to set up more cameras around the tank to study the fish’s jumping behavior from a three-dimensional perspective. The current work, based on one camera’s perspective, gives only a two-dimensional view. Techet suspects that, with a more comprehensive picture, they will find that not only the fish’s tail but also its other fins play a role in stabilizing and propelling the fish out of water.

Ultimately, Techet hopes to use what she learns from nature to engineer more agile underwater vehicles.

“Can we understand nature to help us design mechanical systems? What can I learn about these fish that go from a dead start, to jumping out of the water?” Techet says. “Am I going to make a flapping robot that jumps out of the water? Probably not. But the concepts here are ubiquitous between fish, propulsors, and foils in general.”