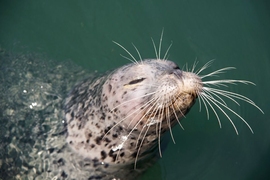 Harbor seals have an amazingly fine-tuned sense for detecting prey, as marine biologists have noted for years. Even when blindfolded, trained seals are able to chase the precise path of an object that swam by 30 seconds earlier. Scientists have suspected that the seal’s laser-like tracking ability is due in part to its antennae-like whiskers.

Now engineers at MIT have fabricated and tested a large-scale model of a harbor seal’s whisker, and identified a mechanism that may explain how seals sense their environment and track their prey.

The team found that a seal’s whiskers serve two main functions in sensing the environment: first remaining still in response to a seal’s own movements through the water, and then oscillating in a “slaloming” motion in response to the turbulence left by a moving object.

In their experiments, the researchers observed that once the fabricated whisker enters the wake left by a passing object, it starts vibrating at the same frequency as the wake’s passing vortices. Careful visualizations show that the whisker “slaloms” among the vortices, like a skier zigzagging between flags.

The research shows that this slaloming allows the whisker to extract energy from the wake, causing it to vibrate at the precise frequency of the wake — a mechanism that may give seals a clue to an object’s path, its size, and even its shape.

Michael Triantafyllou, the William I. Koch Professor in MIT’s Department of Mechanical Engineering, says that biologically inspired sensors, modeled after the harbor seal’s whiskers, may aid underwater vehicles in tracking schools of fish, as well as sources of pollution — a goal that he is currently working toward.

He and former graduate student Heather Beem, whose PhD thesis formed the basis of the work, have published their results in the Journal of Fluid Mechanics.

See how MIT researchers created a sensor, based on a harbor seal’s whisker, that can be used by underwater robots to collect data.

The harbor seal’s whiskers are unique in shape: Even to the naked eye, an individual whisker appears not uniform, but wavy. Under a magnifying glass, the pattern is more intricate, with an elliptical cross-section that varies in size along its span.

He and Beem proposed that a whisker’s curiously geometric morphology may play a part in a seal’s exceptional sensitivity.

Using 3-D printing techniques, Beem reproduced the seal’s wavy morphology at a much larger scale, in order to accurately measure its response to various wakes. She tested the whisker’s vibration properties in a 30-meter-long tank of water with a moving track suspended above the water.

In her experiments, Beem first attached the artificial whisker to the moving track, allowing the whisker to freely vibrate in the water as it moved down the length of the tank.

While most long, thin rods tend to create large vortices, or eddies, as they move through water, forming a pattern that’s well-known in fluid mechanics, Beem found that the wavy pattern of the whisker’s geometry created much weaker vortices, enabling the whisker to move silently, with very little vibration, through the water.

The whisker’s morphology, the researchers found, may help the seal block out its own disturbance as it moves through water.

“It’s like having the ability to stick your head out of a car window, and have there be no noise, so that your ears don’t ring: It’s a quieting effect,” Triantafyllou says.

To test how a whisker reacts to external stimuli, Beem conducted a second set of experiments in which she attached a large, long circular cylinder ahead of the whisker. As the cylinder moved down the tank, it created large eddies, similar to the patterns generated by a passing fish.

In response, she found that the whisker, when following the cylinder, vibrated significantly, moving in a slaloming pattern among the wake vortices. As she varied the speed of the moving track, the whisker quickly adapted, vibrating at precisely the frequency of the cylinder’s changing vortices.

“The geometry of the whisker allows for this phenomenon of being able to move very silently through the water if the water’s calm, and extract energy from the fish’s wake in order to vibrate a lot,” Beem says. “Now we have an idea of how it’s possible that seals can find fish that they can’t see.”

Triantafyllou says artificial whiskers may be useful as low-power sensors for underwater vehicles.

“We already have a few sensors that can detect velocity, but now that we know better what they can do, we can use them to track sources of pollution and the like,” Triantafyllou says. “By having several whiskers on a vehicle, like the seal, you can, for example, detect a faraway plume, and track it all the way to the end.”

This research was supported in part by the Office of Naval Research, the Singapore-MIT Alliance for Research and Technology, and the MIT Sea Grant program.

The Economist highlights Prof. Michael Triantafyllou’s work studying how seals employ their whiskers to detect their surroundings. Triantafyllou is using the seal whisker as a model for developing an underwater sensor that would, “detect the wakes of natural objects, such as fish and marine mammals, and artificial ones, such as other robots, surface ships and submarines.”

Bret Stetka writes for The Atlantic about how MIT researchers have studied how harbor seals are able to use their whiskers to track prey. Prof. Michael Triantafyllou explains that his team’s findings could be used to develop new technologies that, for example, could “detect plumes underwater, such as in oil spills, or other plumes polluting the environment.”

Washington Post reporter Rachel Feltman writes that MIT researchers have uncovered how seals use their whiskers to sense their surroundings. The findings could “help aquatic vehicles track schools of fish or sources of pollution.”